At the beginning of May 2018, Mark Zuckerberg’s Facebook initiated some restructuring moves, creating a new unit that would explore ways and approaches to integrate the distributed ledger technology (DLT), better known as blockchain, into the social network.
David Marcus, who has led FB’s Messenger platform and is a former chief executive of payments system PayPal, has become the head of the new team. It’s worth mentioning that Marcus is a board member at the largest crypto exchange in the US – Coinbase.
Interestingly, in a Facebook post published in May, Marcus hinted that he was the initiator of the new blockchain group:

“After nearly four unbelievably rewarding years leading Messenger, I have decided it was time for me to take on a new challenge. I’m setting up a small group to explore how to best leverage Blockchain across Facebook, starting from scratch.”

Coincidence or not, Facebook’s stock price, traded on the NASDAQ exchange, gained about 5% in less than three days after Marcus’ announcement. The stock was recovering after Facebook was accused that it was selling personal data to third parties that could eventually influence opinions. After the so-called Facebook-Cambridge Analytica scandal emerged and court hearings started, the stock price lost over 20%, generating panic among investors. 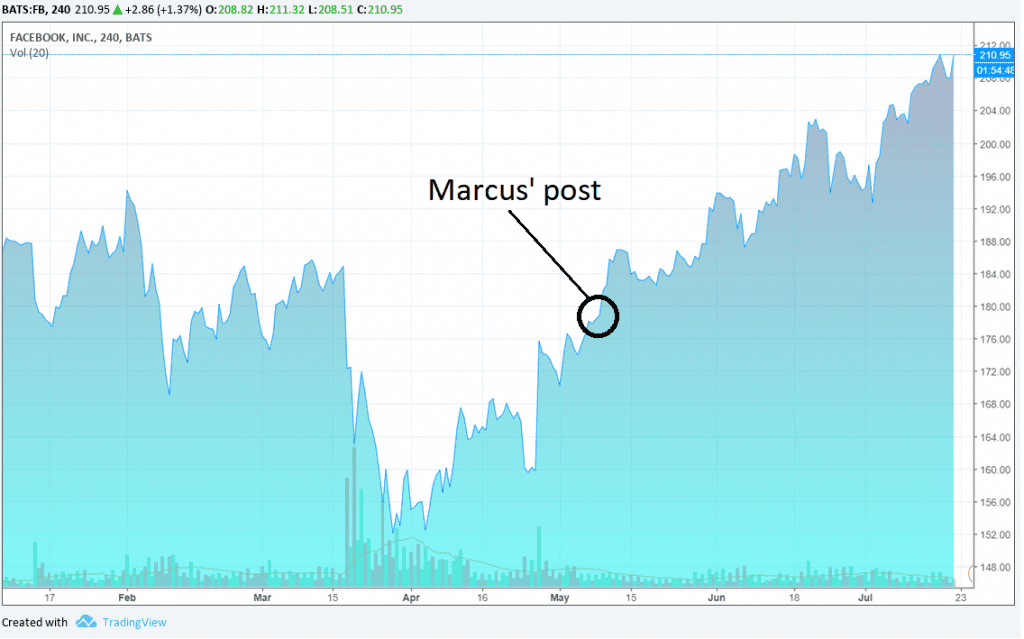 At this point, it is not really clear how Facebook will integrate the blockchain technology and what use cases will be viewed as priorities. At this early stage, Marcus’ team has the responsibility to explore the technology and see what value it can bring in the context of Facebook’s particular aspects.
Interestingly, Facebook’s move comes a few months after it banned ads related to cryptocurrency, initial coin offerings (ICO), and binary options. The company said that it wanted to prevent entities from advertising “financial products and services frequently associated with misleading or deceptive promotional practices.” The decision came amid multiple cases of ICO scams, pump and dump schemes, and hacking attacks, as the cryptocurrency industry has been at its nascent stage and still unregulated in most of the countries.
At the end of June 2018, Facebook eased its stance on cryptocurrencies and announced that it was reversing its crypto ads ban to a certain degree. The company said that preapproved advertisers could promote cryptocurrency-related services. However, ads related to binary options and ICOs are still banned.

The team led by David Marcus also includes former Instagram (a Facebook company) executives James Everingham and Kevin Weil.
At the start of July, Evan Cheng, who has been director of engineering at Facebook, changed his job position to director of engineering, blockchain, according to his LinkedIn profile. Previously, he worked as senior manager at Apple. The fact that Evan Cheng, an engineer with solid experience in programming, became part of the blockchain team might indicate that Facebook is serious about the DLT.

Blockchain has been popular as the technology that underpins Bitcoin and many other cryptocurrencies. However, as time passed, its use cases expanded across a wide range of market sectors and industries. With a bit of creativity, the technology can prove its transformative potential in many ways, from smart contracts to cross-border payments and supply chain processes.
In the case of Facebook, blockchain can be beneficial at increasing the security of personal data, especially amid the Cambridge Analytica scandal.
Besides, sources familiar with the matter told Cheddar that the social media giant was thinking about issuing its own cryptocurrency. The token would be used by FB users to make electronic payments. For example, they can pay for the ads space or certain services. The sources, who chose to stay anonymous, said that the company wouldn’t hold any ICO (it would be ironical to conduct one).
Interestingly, at the beginning of February, David Marcus said that Facebook wouldn’t integrate any cryptocurrencies anytime soon. At that time, there were no talks about a blockchain team inside the company.

“Payments using crypto right now is just very expensive, super slow, so the various communities running the different blockchains and the different assets need to fix all the issues, and then when we get there someday, maybe we’ll do something,” he told CNBC.

As soon as Facebook itself doesn’t come with any hints on how it plans to use the DLT, we can only guess its next moves. However, we know that blockchain can solve a variety of things.
Facebook is often criticized for being a devotee of a ruthless monopoly. It bought Instagram and WhatsApp when it became clear that these might grow into real competitors. Is it possible that the company is now afraid of decentralization and chose to convert it to its benefit?
[cta_en link=”https://iqoption.com/en/?aff=88&afftrack=facebook2307″ name=”Trade now”][/cta_en]