Blockchain is the hottest topic now, together with Bitcoin and cryptocurrencies. However, if some people are worried that Bitcoin might be a bubble, almost everyone agrees that the technology behind it is disruptive and will continue its path to the point of full adoption and integration with the internet. 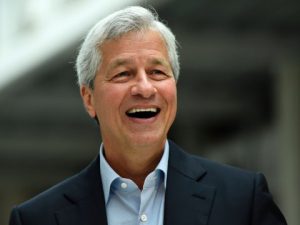 Even Jamie Dimon, the CEO of JP Morgan, who was so critical against Bitcoin and caused so much agitation in the cryptocurrency community, agrees that the distributed ledger technology (DLT) has great potential to change the financial and other sectors. Moreover, JP Morgan tests blockchain for different use cases together with other banks. But first, let’s define it.

There is nothing complicated about blockchain – it is a distributed ledger or database within a network. The ledger is shared by all the network participants, suggesting that the whole system has no single authority and has no single location, as multiple replications of the same ledger version are simultaneously located in many places.

All of these replications get updated when new data or transaction is recorded into the blockchain through the consensus of all participants. Miners are responsible for approving transactions and monitoring the network by solving sophisticated formulas with the help of computing power. It is a peer-to-peer (P2P) system that removes all intermediaries, which increases security, transparency, and stability, and reduces costs and human errors.

Blockchain and the Internet

Today, we can divide the modern technology era into two distinctive periods: before the internet and after the internet, this is how disruptive the World Wide Web has become. The internet boom transformed the way we carry out transactions, communicate, share information, promote business, entertain, study, and so forth.

You would think everything we do now is somehow connected to the internet. Well, many experts like to think that blockchain technology has the potential to generate the same revolution as the internet has done.

Here are some aspects of today’s blockchain hype, which are very similar to the internet boom before 2000:

Will the History Repeat Itself?

Given the long list of similarities between the two eras and phenomena, some experts warn that the blockchain hype might end the same as the dot come bubble did in 1999, and then reach a maturity level when it gets widely adopted. It means that the blockchain industry creates the conditions for overvalued assets, which can potentially cause a future market correction that may affect many companies and whole sectors.

I don’t know the future, but I know that despite the correction or crisis from 1999, the internet didn’t disappear, but continued its direction by shaping whole industries. I think the same will happen with blockchain technology, suggesting that it won’t be affected entirely by a potential correction.

Blockchain can really transform markets, as we can get the control over every transaction, contract or any move inside a network. We can make transactions and P2P processes become fully transparent, secured with the help of cryptography, time-stamped, and easy to monitor. This is different from today’s internet, where intermediaries play the key role. Companies like Facebook, Google, governments, banks, tech companies are all intermediaries that affect the information and processes within the internet network. Blockchain remove such players for the benefit of everyone.

What We Have Today?

Blockchain is at a nascent stage today. Here are a few examples where companies and governments test the technology:

The list of blockchain use cases and companies testing it can go on. I have tried to make an image so that you could see how it is slowly adopted in different regions of the world, from the US to Russia and from Europe to China or Australia.

Given the significant advantages of DLT – among which we can name transparency, decentralization, security, anonymity, equality, and low-costs – we can rest sure that the technology will show its full capacity in the years to come.

Anatol is a cryptocurrency and blockchain enthusiast who loves to dissect complex topics and present them in an easy-reading format. As a financial writer with several years of experience, he rapidly switched to the cryptocurrency boom, as he could anticipate that this industry might be the future of finance. Currently, he writes for Cryptovest, a leading crypto-news platform. With a previous focus on general finance topics, his articles reached highly regarded portals, such as SeekingAlpha, TheStreet, and Yahoo Finance.

What is Tokenisation and How It Works in the Real Economy