Comments within speeches from Janet Yellen and Mario Draghi have weakened the dollar and sent the euro to new multi-year highs.

While it is highly unlikely that Mr. Draghi and Ms. Yellen orchestrated recent moves in the EUR/USD it is clear that their speeches, given last week at the Jackson Hole Economic Symposium, delivered a one-two punch sending the dollar to new lows and the euro to new highs. In both cases it is not so much what they said that moved the market as what they didn’t say. Ms. Yellen gave no indication or mention of balance sheet reductions, rate hike timing or inflation outlook. Her speech was perfectly non-committal and taken by the market as a sign of dovishness. Mr. Draghi also gave little indication about ECB plans or outlook, and did nothing to stifle growing expectations the bank would begin tightening activities sometime this year. His speech, also non-committal, was taken as hawkish and put a bid in the Euro. 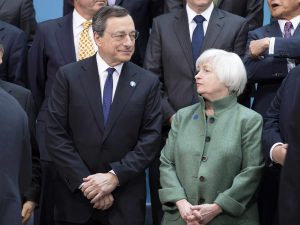 Ms. Yellen’s speech has been described as tight-lipped and terse. Reading over the transcript she comes across complacent and satisfied with the way the US economy is moving. She addresses risks but in an academic way, “we can never be sure that new crisis will not occur”.  Her statements are forward looking and speak to the possibility of excessive optimism and over-leveraged markets, but from the perspective of calm and properly functioning markets. According to the CME’s Fed Watch Tool expectations for rate hikes fell to long terms lows, there is now a less than 50/50 chance of rate hike all the way into summer of 2018. There is zero chance of  a hike at the next meeting scheduled for 20, September. Mr. Draghi’s speech, quite frankly, comes across as a man who believes he did right when it was time to enact QE but those times are past.

Why Did The EUR/USD Move Higher?

With the US economy expected to strengthen and the FOMC on a path of interest rate hikes why then did the EUR/USD move higher last Friday? The answer is simple. The dollar is being sand-bagged by decreasing expectation for an FOMC rate hike and increasing expectation the ECB will begin their tapering/tightening cycle. This combination is 1) causing the dollar to weaken from bullish extremes driven by robust expectations and 2)  causing the euro to strengthen as hawkish expectations establish themselves in the market. Where once the FOMC and ECB were on divergent paths, weakening the euro and strengthening the dollar, they are now on convergent paths causing the opposite.

The EUR/USD gained a full percent in the wake of the speeches and extended those gains over the next few days. The pair broke above resistance at 1.19000 and is now testing it for support. Candlestick action over the past few days suggests that there is some resistance above 1.2000 and that is to be expected. This is a near 2.75 year high and coincident with a small gap down which formed at the beginning of 2015 and during the early phases of the current FOMC tightening cycle. If support is confirmed here we can expect to see the pair continue higher into the near term at least. A firm break above 1.2000 will be bullish with upside targets near 1.2200 and 1.2400 over the next 3 to 6 months.

The risk is economic data and of course central bank speak. There is no expectation for either bank to change policy at their next meetings but what they say will surely move the market. Between then and now is the data. Today’s ADP suggests robust growth in the US job market and if that is confirmed by the NFP interest rate outlook could firm and the dollar could strengthen.

I began trading October 5th, 2015 after attending a seminar about buying/selling stocks. I had never understood the market until then and felt a calling to trade. Since then I have focused my efforts on technical analysis and market speculation, along the way I have picked up an interest in economic analysis, dividend/income investment, closed end funds and of course binary options.

Previous article How to Not Get Scammed

Why the Dollar Is Set for Big Gains?

Citigroup: “Cryptocurrencies are a real enough threat to the financial system”