Five most important news to start your day. These events are very likely to influence the market and trigger exchange rate fluctuations. Read to stay informed.

The initial list of 10 demands composed by Saudi officials picked another three points. Four Arab countries want Qatar, among other things, to close Al-Jazeera TV channel, the official mouthpiece of the state propaganda, and cut its ties with Iran. Saudi Arabia seems dissatisfied with Qatar’s independent approach to foreign policy and its general line that goes against the Saudi’s best interest. Oil prices can be affected by the Gulf crisis, yet considering growing shale output in the United States, the probability is not too high.

Another Attempt to Replace Obamacare 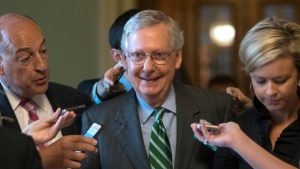 A group of Republican Senators decided it was time to approach the painful topic of American healthcare. Several senators have already voiced their skepticism, stating that the bill needs restructuring in order to be passed. President Trump indicated his interest in the project but agreed with remarks made by conservative colleagues. Ex-president Obama wrote on his Facebook page that “If there’s a chance you might get sick, get old, or start a family – this bill will do you harm.”

Annual Stress Test for US Banks

34 major United States banks all cleared the first stage of the stress test, carried out by the Federal Reserve. In the worst-case scenario, banks will lose up to $393 billion but still survive the event. Stress tests are important to assess the well-being of the financial system, especially after the crisis of 2008 demonstrated the destructive power of bad loans. “This year’s results show that, even during a severe recession, our large banks would remain well capitalized,” said Fed Governor Jerome Powell. Stable and healthy financial system contributes a lot to the well-being of the American economy in general.

While oil supply is growing by the day due to Nigeran and US-based producers, oil demand remains steady, which prevents prices from growing. China, India, and Japan constitute a lion’s share of oil consumption in Asia. Aging population of Japan, demonetization shock in India and a fuel glut in China all contribute to lower than expected oil consumption in the region, creating a negative pressure on the oil price.

JD.com, China’s second-largest e-commerce company is expected to invest almost $400 million in UK fashion retailer Farfetch to diversify geographically and gain a presence in the United Kingdom. JD.com will become a major Farfetch shareholder when the deal is complete. Amid fierce competition between JD and Alibaba in China, the former pushed heavily into European markets to gain a foothold there while it is still possible.

Types of Crossovers, Classifying Your Entry