Japanese banks plan to introduce a digital currency ready for the 2020 Tokyo Olympics as they respond to the threat from China’s Alibaba, which recently launched its mobile-phone payments service in the country. A consortium of banks, led by Mizuho Financial Group and Japan Post Bank, has won support from the country’s central bank and financial regulator to launch the J Coin, an electronic currency to pay for goods and transfer money using smartphones. The J Coin would be convertible into yen on a one-to-one basis, operating via a smartphone app and using QR codes to be scanned in stores. In return for providing the service for free, the banks would benefit by collecting more data on consumer spending patterns. “I think this electronic money is quite ahead of  cards, because when you use the cards the shops pay a certain fee,” the CEO of Mizuho Financial Group, told the Financial Times. Meanwhile, MUFG has been developing a blockchain-based alternative called the MUFG coin. However, there have been recent discussions between the top banks about the possibility of MUFG joining the J Coin initiative. “We are aware of the issue or concept [of J Coin], however, we would like to refrain from answering,” said MUFG when asked about the talks. “We want MUFG coin’s results and know-how to be used across Japan, including by other banks, but have not decided on what concrete measures to take.”

Several big Japanese banks have been lobbying their government and regulators about the danger of Alibaba’s Alipay service being launched recently in several cities including Tokyo, which they argue will allow data on Japanese consumers to be sent to China, according to a presentation seen by the FT. Their plan is to showcase Japan’s fintech capability at the 2020 Tokyo Olympics, when hundreds of thousands of tourists are expected to visit Japan. Mr Sato added that it would work best if all banks worked together on the project. “We shouldn’t grab the idea for ourselves, we should have open innovation,” he said.

Hironori Kamezawa, chief information officer of MUFG, told last week’s FinSum conference in Tokyo that Japanese banks were getting serious about the threat of digital disruption. “We have a strong sense of urgency and a sense of crisis in the banks of the situation facing us,” said Mr Kamezawa, adding that the MUFG coin was being tested by 1,600 of the bank’s senior staff. “I use it myself to settle the bill when I go out for a drinks party.” Good news for regulatory adoption and Bitcoin?

Dyson to make electric cars from 2020 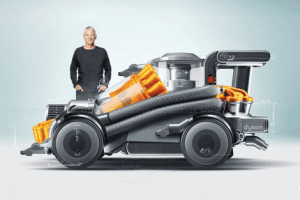 Dyson, the engineering company best known for its vacuum cleaners and fans, plans to spend £2bn developing a “radical” electric car. The battery-powered vehicle is due to be launched in 2020. Dyson says 400 staff have been working on the secret project for the past two years at its headquarters in Malmesbury, Wiltshire.

However, the car does not yet exist, with no prototype built, and a factory site is yet to be chosen. Sir James declined to give further details of the project. “Competition for new technology in the automotive industry is fierce and we must do everything we can to keep the specifics of our vehicle confidential,” he told staff in an email.

Important points that are undecided or secret include the firm’s expected annual production total, the cost of the car, or its range or top speed. Sir James said about £1bn would be spent on developing the car, with another £1bn on making the battery. Interesting move for Dyson. 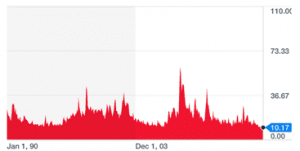 Two months after the volatility vigilante made a humongous wager that the VIX — would surge from its depressed levels by October, the trader has essentially extended that bet into December. The so-called rollover carries roughly the same maximum potential payout as before: a whopping $263 million. And considering the trader lost only about $9 million on the wager over the past two months, closing the October trade and pushing it to December allows continued exposure to a huge upside at a relatively small cost, according to a person familiar with the trade.

Still, considering the VIX’s propensity to trade near all-time lows, it’s a risky bet. The so-called fear gauge has fallen 23% so far this year, and investors continue to pile into the short-volatility trade, which has evolved into one of the market’s most crowded positions.

There are a couple of potential explanations for the trade. The first is that the trader decided the prolonged low-volatility environment would end in the next three months. While it seems as though it could stretch on forever, even the longest stretches of subdued price swings have eventually given way to fluctuations. It’s also possible the investor is betting on volatility around some key upcoming events. The trade’s December expiration will capture two Federal Reserve meetings, as well as a deadline for the government’s debt-ceiling decision. There’s a 60% chance the central bank will increase its benchmark interest rate by 25 basis points at the December meeting, according to Bloomberg’s World Interest Rate Probability data.

While this mystery trader is making waves with large bets, they’re not the only person wagering on a VIX spike. The trader known as 50 Cent — recently revealed to be affiliated with Ruffer LLP, a $20 billion investment fund based in London — rose to prominence with repeated bite-sized volatility bets. After all, there’s a possible $263 million payout on the line.

Equifax CEO walks away with $18 million

The departure of Equifax’s chief executive officer on Tuesday has not dampened the criticism of the company since it disclosed a massive data breach earlier this month. As in other recent corporate scandals, the departure of Richard Smith was swift if not inevitable. The credit reporting company said he was retiring effective immediately and he wouldn’t get a bonus for this year, though he is eligible to walk away with at least $18.4 million in pension benefits. Some said Tuesday his departure should have happened more quickly. Wells Fargo dispatched its former CEO last year, one month after regulators said thousands of its employees opened millions of fake deposit and credit card accounts to meet aggressive sales goals. Target’s former CEO held on for four months before leaving in May 2014 in the wake of a major data breach at the retailer in late 2013. But Anthem’s CEO did not leave that company after a 2015 data breach that exposed personal information for 79 million people. The second-largest U.S. insurer recently settled with victims of the hack for $115 million, the biggest data breach settlement yet.

What struck people as different about Equifax’s situation was the company’s bungled response to its crisis. For starters, Equifax waited 40 days from the time it discovered the breach in late July to its public disclosure on Sept. 7.

Stock markets ended a mixed session on Tuesday as the broader market largely ignored a modest bounce-back performance from the technology sector which moved sharply lower on Monday. The tech-heavy Nasdaq climbed 0.2%, the S&P 500 finished just a tick above its flat line, and the Dow slipped 0.1%. The Russell 2000 (+0.3%) settled at a fresh record high for the third session in a row. The technology sector never touched negative territory on Tuesday, but the magnitude of its gain did fluctuate a bit, hovering between 0.01% and 0.84%. However, the sector’s top component by market cap–Apple remained strong throughout the session, determined to end its four-session losing streak. Apple shares settled higher by 1.7%. Meanwhile, NVIDIA was strong early following news that it will provide GPU hardware to several Chinese tech giants, but weakened throughout the day. The chipmaker hit a new session low in the late afternoon following a report that Tesla will use Intel technology for infotainment instead of NVIDIA. Still, NVIDIA managed to contribute to the technology rally, settling higher by 0.6%. Red Hat also contributed jumping to its best level in nearly two decades, after beating both top and bottom line estimates and issuing upbeat guidance.

Outside of the tech sector, Darden Restaurants the owner of brands like Olive Garden and Long Horn Steakhouse, dropped 6.5% despite reporting in-line earnings and revenues. Conversely, Carnival climbed 2.9% after reporting better-than-expected top and bottom lines. The S&P 500’s consumer discretionary sector, which houses both Darden Restaurants and Carnival, finished slightly behind the broader market, ticking down 0.1%. In general, sector movement was pretty modest as eight of the eleven groups settled within 0.2% of their unchanged marks.

Fed Chair Janet Yellen spoke at a NABE meeting in Cleveland on Tuesday, defending a gradual path of rate hikes despite continued uncertainty in the area of inflation. Her comments did not move either the stock market or the Treasury market, which declined modestly, sending yields slightly higher.

12.50am – BoJ meeting minutes: the meeting noted that there was still the potential for more easing, and the minutes may expand on this. Markets to watch: Nikkei, JPY crosses

5 Reasons to Why Bitcoin is Here to Stay