How Do Casper, Plasma and Other Ethereum Upgrades Works?

We are living in the dial up era of Cryptocurrency. Future versions of ourselves will look back at the congested Ethereum blockchain and slow transaction times like we remember listening to a dial tone before connecting to the internet.

Make no mistake, there is incredible progress being made, but Ethereum is too slow. It’s estimated Visa can process 50,000 transactions a second, which dwarfs PayPal’s 193 TPS and SWIFT’s 174.

Ethereum needs to scale to compete. It currently manages about 7 – 15 tps. Ethereum wasn’t intended to act only as a decentralized currency. The Ethereum network was designed to host daps, ICOs and ERC20 tokens. This is going to require a network that is orders of magnitude faster than it is now.

Congested blockchains and slow transaction times are common across the board for POW cryptocurrencies. 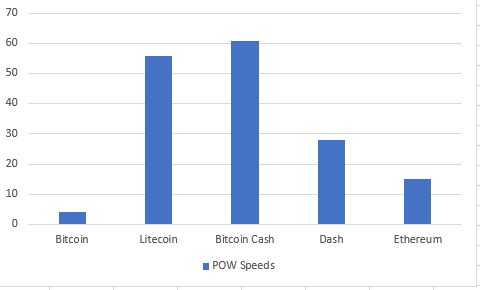 Litecoin and Bitcoin Cash has increased their transactions times by increasing the block sizes and Litecoin was first to market with SegWit, but all of these cryptocurrencies are being held back by an inability to scale.

At Devcon 3 (an Ethereum conference) Vitalik Buterin talks about a trilemma affecting blockchains.

The trilemma claims that blockchain systems can only at most have two of the following three properties:

This is true for all proof of work blockchains, but what about other cryptocurrencies that have proof of stake blockchains, Directed acyclic graphs and Proof of Importance consensus algorithms. 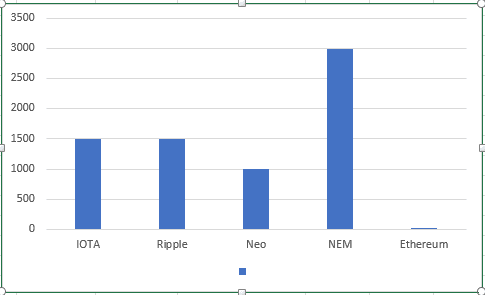 Ethereum is being left behind.

From an investor’s point of view, scalability isn’t essential for speculative price increases and mad hyped up moon runs #lambo. At the floor of the largest dip in the market cap, so far, there are still over $80 billion dollars tied up in Ethereum and around 400 billion in the market. But imagine what Ethereum will be worth when it can handle 1000 or 100000 or even 10000000 transactions per second. At these speeds, Ethereum would be faster than Visa and have the computational power to accommodate its use case and process transactions faster than all other current cryptocurrencies. Scalability will give Ethereum a clear advantage, and I think it will be the straw that broke the Bitcoin’s back.

There is a clear inverse relationship between Bitcoin’s market cap and Ethereum’s:

How are Ethereum Devs going to fix this?

Big name Ethereum developers like Joseph Poon, Vitalik Buterin and Vlad Zamfir have proposed, developed and are even running in test nets, upgrades and forks that will scale Ethereum to potentially millions of transactions a second.

I think the developments we are most likely to see implemented on the main Ethereum chains in 2018 – 2019 are Casper, Plasma, Sharding and Raiden. 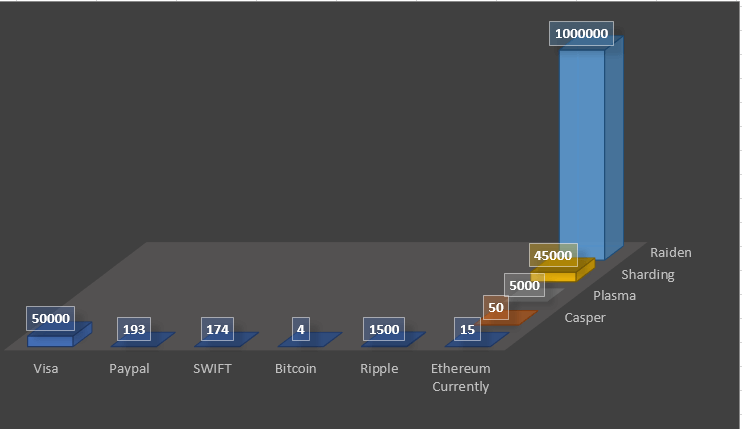 Casper is a set of smart contracts on the Ethereum network that has been running in the test net since the end of last year. It aims to move Ethereum to a proof of stake / proof of work hybrid, before the full transition is made.

Casper FFG (friendly Finality Gadget) will first be a smart contract that allows for staking and validating blocks before they are added to the blockchain. Blocks are still created with the normal ethash proof of work protocol, but the smart contracts will distribute staking rewards and establish consensus protocols by assigning value to following a set of rules that secure the network.

People who commit their ether to Casper via a special type of deposit, known as staking, are called validators. The weight that each validators’ vote carries is determined by the amount of ether staked, and they take it in turns programmatically electing and creating block through two voting functions prepare and commit.

Rumour has is that at least 1000 ETH will need to be staked to become a validator, but this number is unconfirmed.

The nothing to stake problem is a common criticism of POS blockchains. Since there is only a trivial amount of computational work required for a validator to vote on a chain, and they are rewarded for voting on the correct chain, it is in the validator’s economic best interest to vote on competing chains which impedes consensus.

How does Casper get around this?

To become a validator Casper requires you commit a certain amount of ether into escrow. If two votes are detected from the same validator for competing chains, and it is deemed to be malicious, Casper destroys all the ether that the validator had staked in the bond. If the 1000 ETH predictions turn out to be true, attacking Casper is extremely expensive.

“Imagine 100 people sitting around a circular table. One person has a bundle of papers, each with a different transaction history. The first participant picks up a pen and signs one, then passes it onto the next person, who makes a similar choice. Each participant only gets $1. If you sign one page and later sign a different page, your house burns down.”

Atoms form cells. Cells form ants. Ants form colonies. When enough nodes connect in a network there is synergy. The networks becomes a node itself in a larger network. Ethereum’s Plasma is about putting more information into the ant’s message so the colony can become more complex without increasing its size (number of ants)

Let’s assume our colony has worker ants, soldier ants and gatherer ants. When new ants are born they are allocated a life purpose. If there aren’t even numbers of ants in all the groups, the colony won’t have enough resources and it will die.

New ants are new transactions on the blockchain.

The clever queen has had enough of this so she implements a child chain smart contract. The state of every group of ants, or a certain amount of ants in a location is recorded and broadcast periodically to the queens mainchain.

Previously every single ant was carrying a copy of the ant ledger that contained the state of every ant. Now the nodes only carry a single state.

Like our super ants, Plasma will implement a set of nested blockchains called child chains by layering smart contracts on the main Ethereum blockchain. The goal of Plasma is to scale the network to millions of transactions a second across all the child chains.

You see for the blockchain to be trustless. Every full node needs its own copy of the ledger. More nodes, means more copies, which slows down the network. This is why centralized blockchains like Ripple are so fast; there are only 55 validator nodes, and they are all extremely powerful computers.

Validators will still participate and build the child chains and tokens can be created to incentive favorable behavior and decentivies attacks. Then periodically, the smart contract broadcasts the child chain’s commitments (state) to the main blockchain.

So, instead of every transactions being forged into new blocks, the mainchain only has a summary of the ledger maintained on the child chain. There aren’t as many nodes or transactions on child chains making it much faster.

Well as Joseph Poon explained, “Child Chains are the district, court of appeals, and the Main Chain is the supreme court. Only disputes which are improperly adjudicated by its children are enforced on the root chain, creating incredible efficiency.” – Ethereal Summit 2017 .

While we are Ethereum’s decentralized computing aspirations, Plasma will make Ethereum A LOT cheaper. You only pay for transactions on the main Ethereum network. Running a Dapp on the main net would cost business way more than they would be willing to pay, when they could just run it on a tried and tested server.

What Does All This Mean for Ethereum?

It means Ethereum is getting faster and better. Casper is on the test net, and Plasma is in beta 1 with a beta 2 release scheduled for March 2018.  By May, Ethereum has promised us a fully functional version of Plasma capable of supporting 100k transactions per second.

Combined with Sharding and Raiden, we could be looking at an Ethereum that is completely scalable in the next couple of years. This is a prerequisite for competing as a payment processor and a decentralized computer once Ethereum’s use case is realized.

Another Reason Why Ethereum Is the Best Blockchain

IQ Option·03.09.2018
Close
We use cookies to understand how you use our site and to improve your experience. By clicking "Got it" or by continuing to use our website you agree to their use.
Cookie settingsGot it
Manage consent