Today there is a rich economic calendar with one central bank interest rate decision from the Bank of Canada, a focus on the GDP Growth in several countries and areas such as Australia, Eurozone and Japan, while there is also the release of the Fed Beige Book on the US economic conditions and the weekly US Crude Oil Inventories. Overall moderate to high volatility is expected for the major currencies today.
These are the main economic events to focus on today in the forex market:

Time: 07:45 GMT, 10:00 GMT
The GDP measures the total value of goods and services produced in any specific area, i.e. the Eurozone, is a broad indicator for the health of Eurozone economies, while a robust GDP growth signals an increased level of economic activity, which is positive for the local economy, the Eurozone. The forecast is for a marginal decline both on a quarterly and a yearly basis for the GDP Growth in the Eurozone, which may have a neutral to slightly negative impact on the Euro. The forecasts for the quarterly and yearly basis are 0.6% and 2.7% accordingly, compared with the former levels of 0.7% and 2.8% respectively. 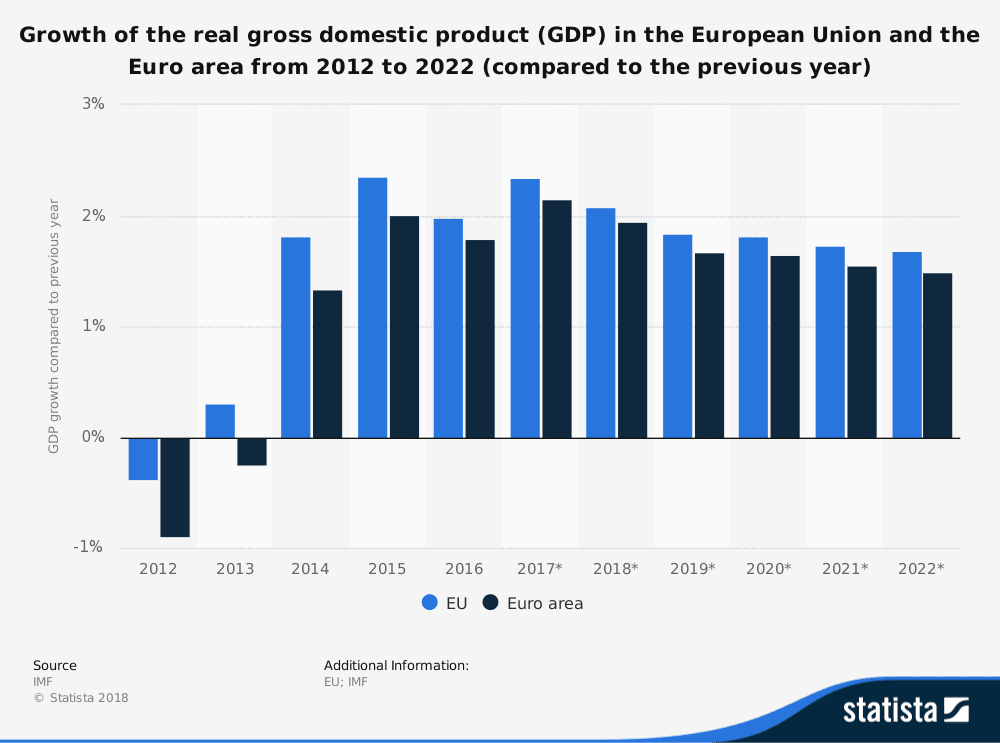 The statistic shows the growth of the real gross domestic product (GDP) in the European Union and the Euro area from 2012 to 2016, with projections up until 2022. GDP refers to the total market value of all goods and services that are produced within a country per year. It is an important indicator of the economic strength of a country. Real GDP is adjusted for price changes and is therefore regarded as a key indicator for economic growth. In 2016, the GDP in the European Union increased by about 1.98 percent compared to the previous year.
We see that the Real GDP growth in the Eurozone is expected to decline gradually over time from 2018 until 2022. But the decline is not expected to be of major importance, as in essence we notice a rather stable economic output for the Eurozone in the near future. A surplus for the Trade Balance is considered positive for any economy as it indicates capital inflows and increased demand for the local currency. The forecast for the Balance of Trade in France is for an increase of the trade deficit at -4.35 Billion Euros, larger than the previous deficit of -3.5 Billion Euros, which is considered negative for the Economy of France and the Euro.

Time: 15:00 GMT, 15:30 GMT
The major economic event for the day, the Bank of Canada Interest Rate Decision can move significantly the Canadian Dollar, not only with the actual decision but also with the statements on the economic conditions. According to tradingeconomics.com “Policymakers said that recent data have been strong, inflation is close to target, and the economy is operating roughly at capacity but noticed that uncertainty surrounding the future of NAFTA is clouding the economic outlook.” As seen from the chart the key interest rate in Canada is in an uptrend, reflecting the current positive economic conditions. The forecast is for an unchanged key interest rate of 1.25%.

Large economic surprises either positive or negative related to the US Crude Oil Stocks Change can move the oil prices and the USD/CAD.

Time: 00:30 GMT
Again as in the case of the Eurozone higher than expected or increasing figured for the GDP Growth Rate will be supportive and positive for the Australian Dollar indicating a robust economy. The forecasts are for an unchanged figure of 0.6% on a quarterly basis and a small decline on a yearly basis with a figure of 2.6%, lower than the previous figure of 2.8%, which may influence negatively the Australian Dollar.

Time: 05:00 GMT, 23:50 GMT
A series of important economic data for the Japanese economy, with the potential to move significantly the Japanese Yen. The Coincident Index measures the current economic activity and business conditions, while the Leading Economic Index signals the performance of the local economy. For both Indexes increased figures are positive for the Japanese Yen, but the forecasts are for small declines for both Indexes.
A narrower than before Current Account surplus is expected, which is positive for the Japanese Yen, but what could prove to be crucial for the short-tem of the Japanese Yen is the GDP Growth Rate. The forecasts are for a decline on both a quarterly and yearly basis with figures of 0.2% and 0.7% accordingly, lower than the previous figures of 0.6% and 2.5% respectively. If these forecasts are true, then there could be a negative sentiment for the Japanese Yen as the local economy will have been experienced growth at a much lower rate, and in almost all cases economic slowdown is considered a negative fundamental factor for any economy.
[cta_en link=”http://bit.ly/2w6LBL6″ name=”Trade now”][/cta_en]