The economic calendar for today is very rich and full of important economic data related to the economies of Australia, Japan, France, Germany, Eurozone, UK and US. The forex market will evaluate the expansion and growth of the manufacturing, services and composite sectors in the Eurozone and in US, and assess the relative attractiveness of the two major global economies. A strong focus later on during the day is on the FOMC minutes, as they can influence significantly the US Dollar upon their release. Overall moderate to high volatility is expected today in the forex market for the Euro, the British Pound and the US Dollar.

Higher than expected or rising figures for the consumer confidence in Netherlands and the various Markit figures for the manufacturing and services sectors will be positive and supportive for the Euro, reflecting economic expansion, increased business conditions  and higher growth. The forecasts are for declines for all Markit figures, which are considered a negative fundamental factor and may influence negatively the Euro upon their economic release.

A series of very important fundamental data for the UK economy, as lower readings for unemployment rate and claimant count change indicate a robust labor market and in general lead to higher economic growth, as more people are employed and therefore consumer spending should increase over time leading to higher figures of GDP growth rate. The forecasts are for an unchanged reading of 4.3% for the Unemployment Rate, an unchanged reading of 2.5% for the Average Earnings Including Bonus, and a small increase for the figure of the Claimant Count Change to 8.8K, higher than the previous reading of 8.6K, while the Employment Change is expected to increase at 110K, higher than the previous reading of 102K. Lower figures for the Claimant Count Change are positive for the British Pound as they reflect the number of people seeking actively for a job. Still the higher than expected Employment Change should be considered positive and supportive for the British Pound, indicating a positive momentum in jobs creation.

This statistic shows the forecasted unemployment rate in the United Kingdom (UK) from 2016 to 2021. The rate is expected to experience a net increase over this period, with little fluctuation between 2016 and 2022. The total decrease over this period is expected to be 0.3 percent, with the largest annual decrease occurring between 2015 and 2016, dropping by 0.5 percent. By 2017 and 2018 the unemployment rate is predicted to shrink to 5 percent before increasing incrementally in the following years. Yet despite this slight increase to the rate of UK unemployment the unemployment has been decreasing annually since 2011. 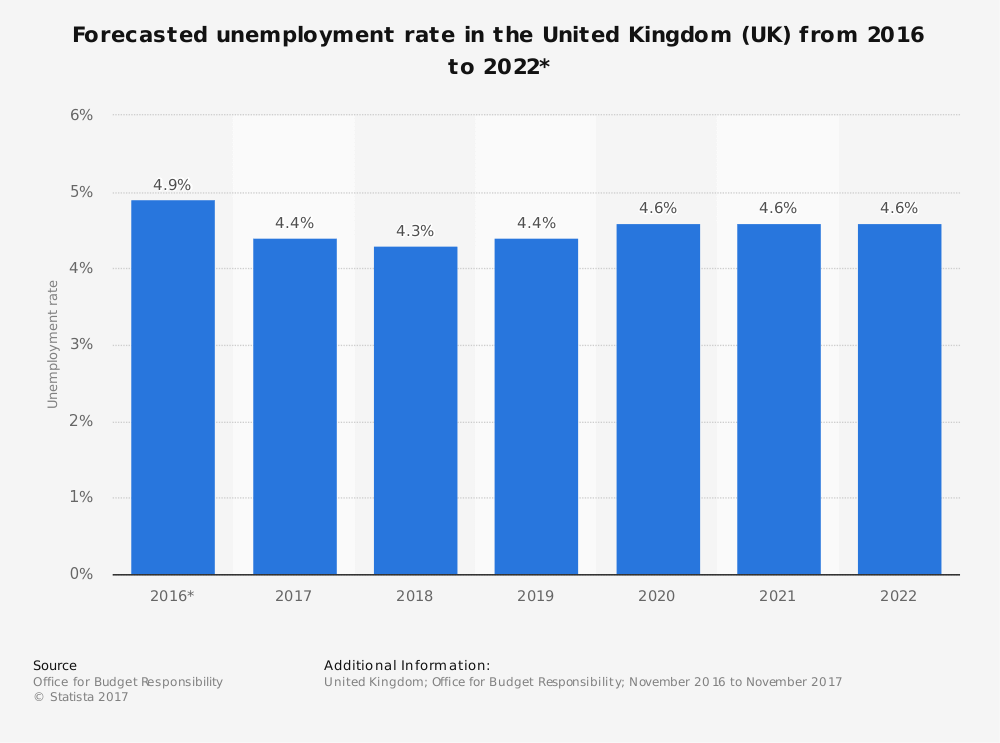 The forecasts for the US PMI figures are mixed, with a decline for the Manufacturing PMI, and increases for the Composite PMI and Services PMI readings. As in the case of the Eurozone, Germany and France, higher than expected or rising figures will be positive for the local currency, the US Dollar, reflecting economic expansion and higher economic growth.

The US API Crude Oil Stock Change provides an overview of the US Petroleum demand. In general if the increase in crude inventories is more than expected, then this implies a weaker demand and is considered negative for crude oil prices.

Increased figures for both economic data are considered positive for the Australian Dollar reflecting a strong labor market and increases in wages, which can increase the consumer spending, while a higher construction activity will indicate a robust construction sector, a leading indicator of economic activity. Low or consistent declines in the Construction Work Done may be an early indicator of an imminent contraction in the economy.

The forecast for the Japanese Manufacturing PMI Flash reading is for a marginal decline, a reading of 54.5, lower than the previous reading of 54.8, while a higher than expected or rising figure for the All Industry Activity Index, which measures the change in the total production by all sectors of the Japanese economy, will be positive and supportive for the Japanese Yen, reflecting a strong economy with increased economic and business conditions.

IQ Option·19.07.2018
Close
We use cookies to understand how you use our site and to improve your experience. By clicking "Got it" or by continuing to use our website you agree to their use.
Cookie settingsGot it
Manage consent