Important economic data is released today both in the European and American Session, with a focus on inflation rate in Germany, a speech from ECB President Mario Draghi, employment change and industrial production in the Eurozone, US retail sales and weekly US crude oil inventories. Moderate to high volatility is expected for the Euro, the US Dollar and the Canadian Dollar due to the release of the weekly US crude oil inventories.

These are the main economic events for today to focus on:

A plethora of economic data is released in the European Session, which can move the Euro. Higher than expected or rising Inflation Rate in Germany and increased figures for Employment Change and Industrial Production in the Eurozone will be positive for the Euro, reflecting the presence of inflationary pressures in the largest economy of the Eurozone and also increased economic activity for the Industrial Sector. As seen from the graph, the Inflation Rate in Germany is expected to increase in the following years and reach the rate of 2.47% in 2022, compared to the projected rate of 1.52% in 2018. 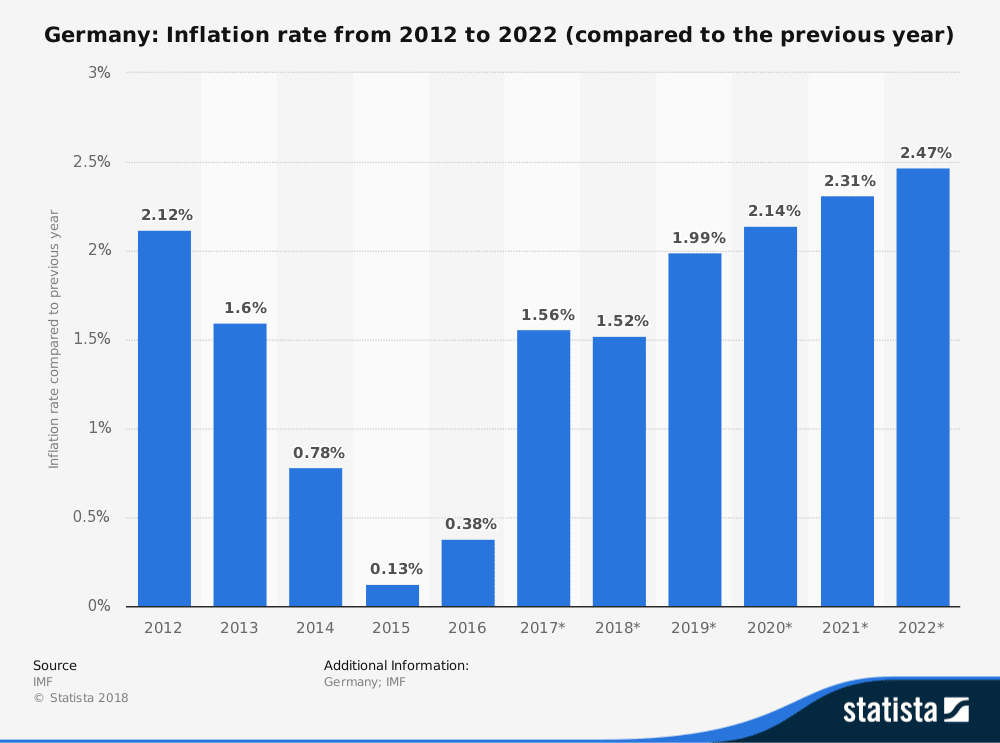 Higher than expected or rising Inflation Rate in Sweden will also be positive for the Swedish Krona, as it will increase the probabilities of future interest rate increases by the Central Bank in Sweden to fight inflation. The forecast is for an unchanged CPIF at 1.7% on a yearly basis and an increase of the Inflation Rate at 0.7% on a monthly basis, higher than the previous figure of -0.8%. Increased Retail Sales in Italy and Industrial Production in the Eurozone will be supportive for the Euro, with the expectations being of a decline foe the Industrial production and the Employment Change in the Eurozone, while Retail Sales in Italy are expected to decline for a second consecutive month. This economic data may influence negatively the Euro.

The Balance of Trade in Russia is expected to have an increase in the surplus with a figure of $14.45 Billion, higher than the previous figure of $13.7 Billion, which should be positive and supportive for the Russian Ruble, due to the increased capital inflows in Russia, and increased demand for goods and services denominated in the local currency. Several Speeches from ECB officials and the President of ECB will be monitored as they have the potential to move the Euro based on the statements related to economic conditions in the Eurozone.

The Producer Prices are a measure of inflation from the perspective of producers as they reflect the average change over time in the selling prices received by domestic producers of goods and services. Higher prices reflect inflationary pressures and are positive for the US Dollar. The forecast is for a decline and a figure of 0.2% on a monthly basis compared to the previous figure of 0.4%.

The forecast is for a figure of 0.4%, higher than the previous figure of -0.3%. Also declining or lower than expected readings for the Business Inventories are positive for the US Dollar indicating unsold goods held by manufacturers, wholesalers and retailers, with very low levels of inventories being indicative of a robust economy due to strong demand of goods by the consumers. The expectation is for a figure of 0.3%, lower than the previous figure of 0.4%. Any significant positive or negative economic surprise for the weekly US Crude Oil Inventories can move the Oil Prices and the USD/CAD currency pair.

GDP measures the overall production and consumption of goods and services in a country, with increased figures being indicative of economic expansion being positive for the local currency. The forecast is for a figure of 3.1%, higher than the previous reading of 2.7%, which should be positive for the New Zealand Dollar.

Today’s EUR Weakness Is an Opportunity for You

US/China Trade Talks. What You Need to Know About It

IQ Option·13.07.2018
Close
We use cookies to understand how you use our site and to improve your experience. By clicking "Got it" or by continuing to use our website you agree to their use.
Cookie settingsGot it
Manage consent