GDP for the first quarter came in below expectations of 1% at 0.7%. The biggest miss in the report was a decline in consumption from 3.5% growth last year to 0.3% growth this quarter.

Despite the headline miss, the dollar rose against most major currency pairs on the strength of the employment cost index which correlates to wage growth of around 2.5%. It recovered about half of its losses following the EU core CPI report.

Wage inflation has been weak throughout this recovery and has been the primary reason for the Fed to keep interest rates low for an extended period. This report is further evidence that wages are rising steadily and could keep the Fed hawkishly inclined even though headline growth was weak. Given the lack of explosive growth, wage gains are mostly coming due to a tight labor market.

The market may be reacting more to the internals of the report, because first quarter GDP has been notoriously misleading as this chart shows: 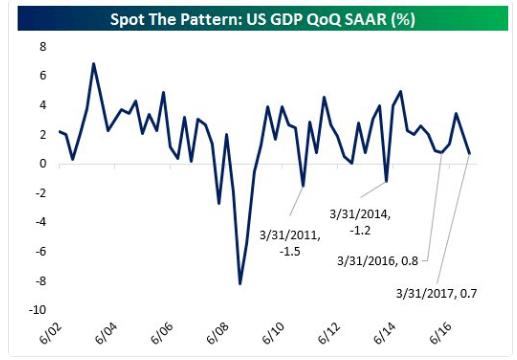 There has been a recurrent pattern of first quarter GDP missing expectations and not being indicative of the overall growth path. Additionally, the major point of weakness was consumption which seems largely driven by a soft patch in auto sales.

In 2017, there is one divergence in the United States that is vexing traders, investors and analysts. ‘Soft data’ is off the charts optimistic while “hard data” is coming in below expectations. Soft data typically describes sentiment and survey data which is forward-looking and based on what people say they are going to do. In contrast, hard data is backwards-looking and measures what they actually have done. Examples include labor reports, retail sales, inflation, and growth figures.

For bears, this is evidence that the dollar and stocks are vulnerable to a correction once the real fundamentals assert themselves. Bulls insist that soft data is forward looking and negative data has already been priced into the market.

Over the remainder of the year, we will see whether the soft data will translate into improved hard data. This will largely determine whether the EUR/USD will fall to parity or whether it will climb above 1.2.

6 Ways to Lose All Your Money When Trading Stocks