Today, almost everyone agrees that blockchain is a revolutionary technology. Well, those who don’t like exaggerations would at least say that it had a transformative potential. Even Bitcoin and cryptocurrency skeptics like JPMorgan consider blockchain a genuine technology. The distributed ledger technology (DLT), as blockchain is also called, has been trialed in various industries for dozens of use cases. From financial transactions to supply chain management and commodity trading, blockchain proved that it could speed-up processes, reduce the need for intermediaries, and cut costs among others. However, according to a recent report published by Boston Consulting Group (BCG), a US-based leading consulting firm, found that the use of blockchain in commodity trading was overhyped and had many drawbacks on several fronts. The study was a bit disappointing for blockchain fans, but it didn’t deny the clear benefits of the emergent technology.

What does the BCG study conclude

The BCG report, titled “a reality check for blockchain in commodity trading” revealed that the implementation of DLT was not beneficial for all the parties involved in commodity trading processes. For example, merchant traders are used to count on market inefficiencies to generate money, and blockchain might negatively influence their position by bringing more transparency and accuracy.

However, this is only one of the several drawbacks companies should consider. Senior executives shouldn’t go crazy about blockchain only because it is trendy. Even though there are several undeniable benefits, there are a few alternatives that might be less expensive than switching to a complex DLT infrastructure. The benefits of blockchain in commodity trading are exaggerated, the BCG concludes.

Still, DLT can successfully address several risks related to fraud, goods quality, or clearing among others. 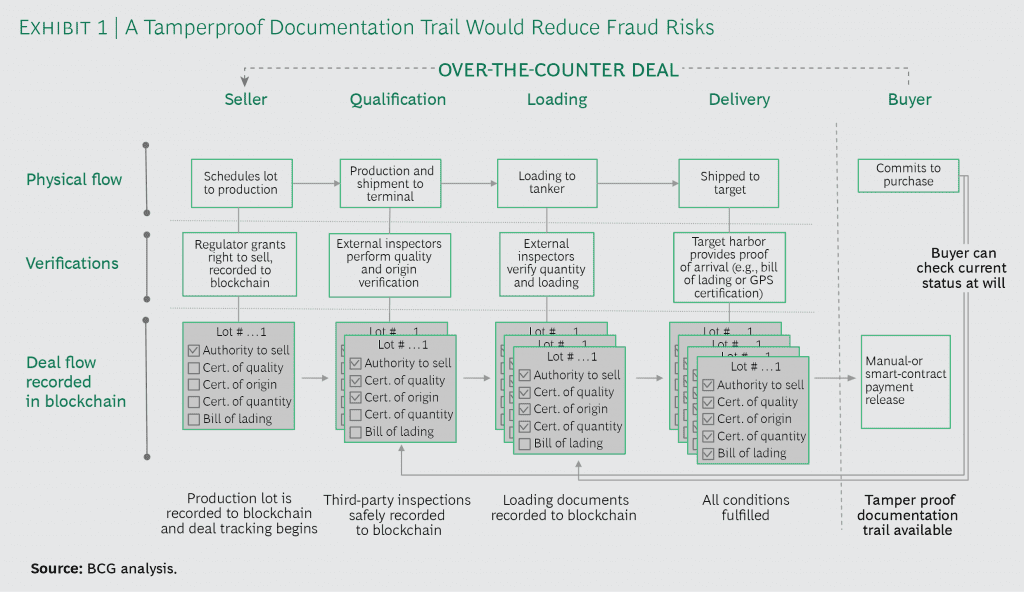 Blockchain could also improve the regulatory oversight and reporting. As of today, participants have to prepare compliance reports, but a DLT platform would allow regulators to inspect traders in real time by accessing the shared ledger.

BCG analyzed the technology in the context of different commodity markets, including power and gas, oil, iron ore, diamonds, and agricultural commodities. The consulting firm tried to define the DLT’s ability to transform commodity trading by focusing on several factors for each market, such as:

Thus, the consulting firm concluded that the implementation of blockchain would impact the commodity markets differently. For example, the power and gas market is already benefiting from high standards of transparency, so blockchain would be mainly required for streamlining the settlement of transactions.

In the end, the BCG authors were not impressed by the promises of blockchain for the market in general. Co-author Antti Belt told Reuters:

“There are so many pilot schemes but none have become real production scale systems yet. One of the problems is that it’s not designed for physical trades. The fundamental issue: how do you track a physical entity in a virtual world? It’s two worlds colliding.”

“People have spent millions, sometimes over $100 million, on IT system, do they want to do it again?” he rhetorically asked.

Even though the BCG believes blockchain is not a panacea in the commodity market, some companies are still open to adopting the technology. Last year, oil giants British Petroleum (BP), Royal Dutch Shell, and Statoil, along with several major banks and trading houses, said that they planned to form a blockchain consortium and venture to build a commodity trading platform.

In February of this year, the companies said that they have already trialed the technology and they were satisfied with the results. According to Alistair Cross, who works for Mercuria Energy Group, which is also part of the consortium, blockchain is great at handling bills of lading – the documents related to cargo ownership in commodity trading. The DLT implementation would reduce paperwork, eliminate errors, and cut costs, he said.

“The way we do our title transfers and post-trade execution is very heavy on paperwork. And the paperwork hasn’t really evolved over the last couple of hundred years,” Cross told Bloomberg.

Elsewhere, Swiss-based firm Open Mineral, which operates an internet exchange platform for metal concentrates, announced last month the collaboration with New York-based blockchain software developer ConsenSys to form a consortium for mining companies (not to be confused with cryptocurrency mining). The group is about to develop a platform for minerals trading and logistics. Minerac, as the upcoming platform is called, will allow parties to easily track minerals throughout the whole supply chain, from mining to shipping and warehousing. Open Mineral is a young startup backed by a group of traders from Glencore.

In conclusion, we may say that 2017 was the year of blockchain trials and experiments, while this year many companies are actually adopting the technology. Even though BCG says blockchain is overhyped, companies should assess its potential individually and make their own conclusions.

Australia Is Developing a National Blockchain

How to Trade Bitcoin in IQ Option

Fabiola Pina·08.05.2018
Close
We use cookies to understand how you use our site and to improve your experience. By clicking "Got it" or by continuing to use our website you agree to their use.
Cookie settingsGot it
Manage consent