“Bitcoin Is a Fad”, Said One Nobel Prize-Winning Economist

Bitcoin’s popularity continues to increase every day, while journalists, scholars, and the general public debate the success and future of this modern invention. 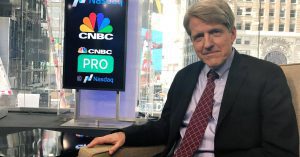 This time it was the turn a world-economy heavyweight, Robert Shiller. The accomplished economist, born in Detroit, was interviewed by the American news outlet CNBC. Shiller said that the enthusiasm around the cryptocurrencies reminds him of Bimetallism, which was a fad in the nineteenth century.

The author of several bestsellers commented that he is curious about the enormous enthusiasm that exists today around Bitcoin. Shiller stated that the fact that this financial instrument is widely extended, does not ensure that it’s going to be around for a long time.

Despite this ambivalence, the American economist said he had acquired bitcoins for the simple reason of them being a profitable option: “I’ll take bitcoin, too, because I know I can sell it and get out of it”.

Shiller said there seems to be some strange enthusiasm for it:

People get excited about things like new monetary standards. Remember bimetallism? It went into a fad, everyone was talking about it for a while. And then it faded.

“I think there’s a danger”, he said about Bitcoin. “But I’m not saying to sell everything. I’m still in the market myself”, he added.

Shiller criticized the gold market, saying that it is a bubble. The celebrated economist indicated that the gold market is a good example of a fad that has been around for a long time. “I think gold is a bubble, but it’s always been a bubble,” hedged Shiller. “It has some industrial uses, but it basically it’s like a fad that’s lasted thousands of years.”

Robert Shiller is one of the world’s 100 most influential economists. In 2000, Shiller published a book now considered prophetic: Irrational Exuberance. In the publication, the author analyzed the stock market bubble with astounding accuracy. Then, in the second edition, published in 2005, he stated that housing prices were inflated in a somewhat dangerous way. He hit again.

Has Bitcoin Price Been Manipulated?