The Japanese corporation Nintendo is perhaps the most recognisable brand for video games and gaming consoles. Differing from many other Japanese stock market securities, the company remained unable to recover back to its initial value after being hit hard in the 2008 financial crisis. You can see this point clearly on the chart, where the Nikkei index works as a histogram and indicates the values of its quotes above the crisis years. 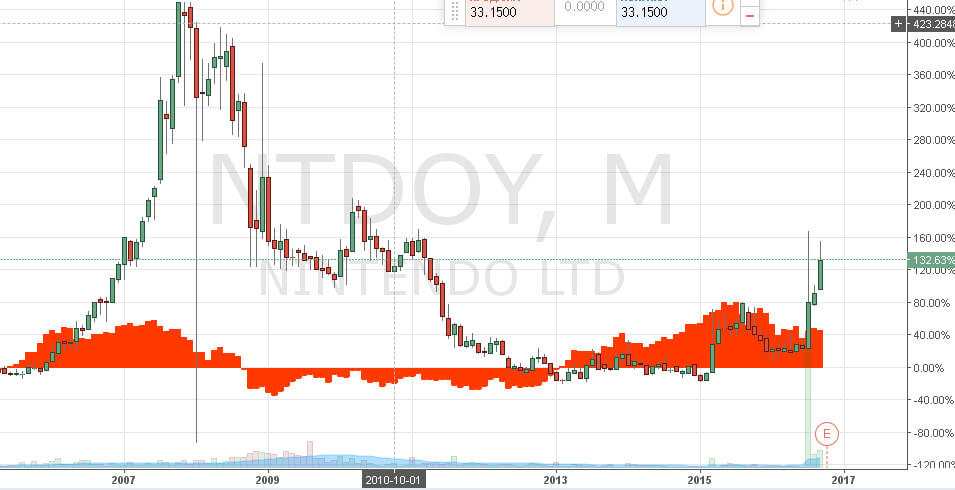 The history of the company itself is unusual and curious. The first mention of the Nintendo brand is in gaming cards, the company’s former primary product. The company entered into the world of electronic games led by engineer Gunpei Yokoi, and under the leadership of its 22 year-old president Hiroshi Yamauchi, great-grandson of the founder. Gunpei Yokoi was head of the now nonexistent development department Nintendo R&D1, which gave the world many innovative games during that time. For example, even in the USSR the popular cartoon “Nu Pogodi!” made its way into Nintendo’s Game&Watch platform. Thus, by the late 1970s, after producing a series of innovative games, Nintendo  had firmly taken the position of leader and pioneer in the industry, and literally created a whole market. 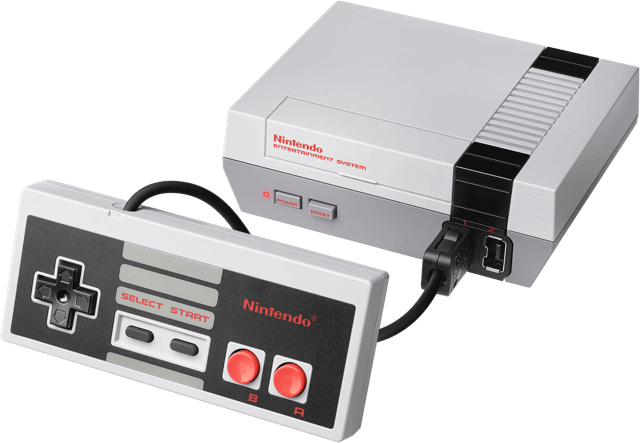 Beginning their decline in 2008, Nintendo shares failed to rally from new products released after the crisis. The sale price on the 2010 Nintendo 3DS console release had to be decreased, which led to losses. In 2012, another console release, the Wii U, had a lot of disadvantages and gathered negative reviews. Developers were too excited by technical capabilities of the innovative platform and forgot about the importance of gameplay content, which resulted in the company’s management having to accept of the failure of their release strategy, after showing negative results for three years in a row.

Nobody thought that the VR-based game about Pokémon, which had its origins in a joking idea competition between Google and Nintendo, would boost company’s capital to the tune of 10 billion dollars. The Niantic startup received major investments for concept development from Nintendo leaders Iwata and Ishihara, and The Pokémon Company.

The first Pokémon Go version was released on the 6th of June and crashed Niantic’s servers when they failed to handle the high customer demand. During the whole trading session on June 7th, the share price was increasing and reached a 10% gain by the end of the day.

The game launch was delayed in many countries until bug fixes were completed, and resumed on July 13th. But the market was still moving. While initial growth happened gradually, by the end of the week scoring systems detected a quote activity burst, attracting traders’ attention. However, share demand appeared to be delayed due to the weekend transition, which was the cause for a major gap on the morning session. On 14 July, after the European game release, Nintendo shares reached 50% growth. 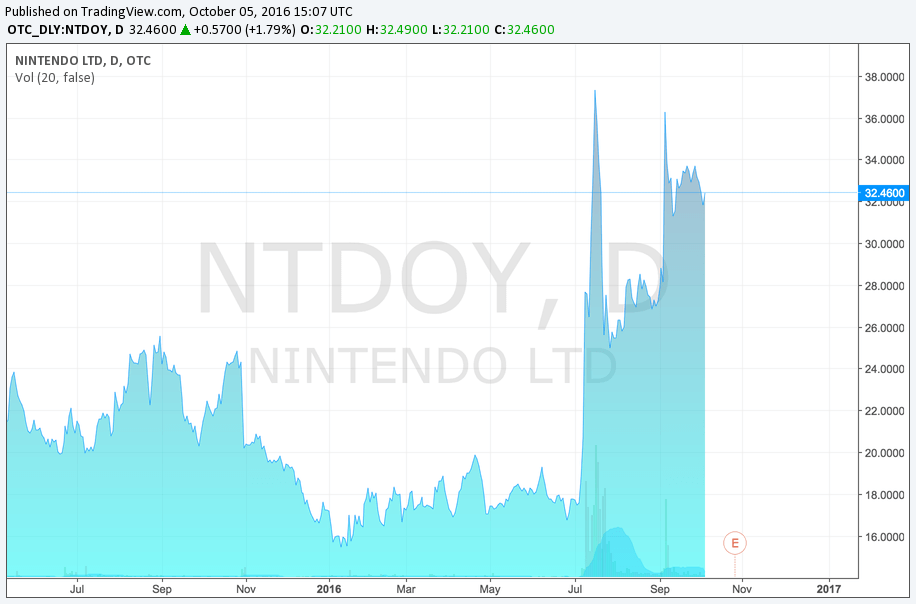 On 22 June, Nintendo revealed their position and disclosed probable benefits from Pokémon Go launch. Nintendo’s share in Niantic remained unknown, but Nintendo share in Pokemon media franchise accounts 32%, although Nintendo employees took no part in the game’s direct development. As of 25 June, the brand had lost 6.7 billion USD from former levels, and their share meltdown amounted to 18%.

The conclusion is clear. Investors deposited funds not in Pokémon Go; they invested, hoping that Nintendo would enter the mobile games and app markets.

The company’s development strategy had previously had included no such step, because of fear of troubled console sales due to the intersection of distribution markets. But in 2012-2013, facing the danger of further losses, Nintendo’s president Satoru Iwata forecasted the likelihood that the company would indeed optimize and refocus toward game adaptations on mobile operating systems.

The growth of Nintendo shares came to pass in 2015. This was preceded by a global uptrend in the whole Japanese stock market, which accelerated at the beginning of 2015. It is known that a rising tide lifts all the boats, and as securities and other drivers reach extreme values, investors start to search for stocks with underestimated potential. Investors buy based on gossip and fix their profits due to facts. The March 2015 press conference announcement of the next generation Nintendo NX console, based on the new i7 processor with its AMD core, supported the company’s share growth even during the period of Japanese “broad market” fall.

Moreover, the developers fixed one of the major mistakes made on the launch of the previous Wii U console, agreeing in advance on game series that would be adapted to the platform. They actively advertised the lineup of available hits, long before the release of Nintendo NX.

After the crushing plunge, strong support came from the press release announcement on Nintendo’s website about launching Super Mario for iOS. It started with Apple’s presentation on 8 September, but the day before, growth in the stock moved towards previous local peaks, reached during the Pokémon Go launch.

It is worth noting that before these events, the App Store set a record for number of downloads thanks to Pokémon Go, leading to significant profit for Apple as well.

Economic indicators for Nintendo are still attractive for investments. Despite increases since 2015, the Р/Е coefficient has a value of 116 in the current year, which is higher than last year, but less than values in 2013.

Despite the revenue decrease, operational profit is up, amid an overall profitable business.

After taxes, the outlook for profits and net income, compared to 2015, does not look very good.

One quarter remains until the end of the year, and we can firmly expect rapid improvement in final annual rates, accounting for the announcements of the Super Mario iOS release and the new feature in Pokémon Go to catchPokémon with bracelets.

Evidently, in 2014 Nintendo made a revision to its strategy. At that time managers paid attention to companies developing mobile apps. Now we see how this strategy is already bearing fruit. Today the brand is among the 20 biggest businesses in Japan.

Verbal interventions are engendered by talent. The trend started with Satoru Iwata, who skillfully arranged the launch of the Nintendo NX console. After the ad campaign for potential game hits available on the platform, intrigue is developing around its pricing. It was very satisfying for users when priced at 250 dollars. But then a rumour appeared about a new type of distribution, costing  about 10 dollars as a monthly payment.

Summing it all up, the management of Nintendo weathered the crisis and corrected the mistakes of 2012, finding resources to diversify the business towards mobile apps. We can now presume that company shares are interesting for traders, as company rates have come to the level of status among world leaders.
Nintendo capitalization accounts for 21.7 billion dollars. It holds 1436th place in the world brand rating, 63rd place in brand value and 84th place in the list of the world’s most innovative companies. Despite the complexity of their situation, the company strove to save its scientific and corporate potential, and not only refused to fire its employees, but instead to expand their amount.

How to trade NTDOY

Nintendo assets are 200% lower than their peak  values (2007-2008 level). That’s why it is possible and reasonable to apply long term call binary options (up\down). Better to enter at the end of November or December. Entry time should be from a month to a half year.

Conditions for choosing the time to enter:

Short term options are feasible to use before a corporate news release. Special attention should be paid to the company Niantic. Indirectly, it has already been played the role of a driver for Nintendo share growth.

If you choose a news-wise style of work and use turbo options with an expiration time of up to five minutes: despite the tone of a given newsletter, the price will follow emotions and the evaluation of a newsletter will take place.

Recent exchange trades took place alongside the release time of Pokémon Go, occurring with a 25% turnover from total Japanese stock trade volume. They were supported by high volatility. In this case, you can make a forecast based on current news and use instruments for a long-term deal close, in order to smooth out risks.

The Tech Sector Is Breaking Out To New Highs

‘Time For Talk Is Over’: US Takes For New Approach on North Korea

The World Without Netflix