Santiment was introduced as the financial information provider of all the cryptocurrencies. With an aim to be the Bloomberg of the crypto-space, the new coin gained popularity very fast. With its introduction in July’17, the market gave it a good welcome.

Within a month, the market cap of Santiment almost doubled and reached above $32 million. But then like many cryptos, a downward rally began, and SAN is left with only above $12 million in the market cap.

Santiment had a lot of activity on the market this week. An upward rally in the early week resulted in a 15% surge in mere 24 hours taking the value from $0.20 to $0.23. But resistance at that mark halted the growth and resulted in a steep dip in the value. But the support level at $0.19 to $0.20 checked any further depreciation. $0.20 mark also acted as a pivot and is followed by an upward rally. But because of a new resistance at $0.23, the value stabilized and fluctuated within a narrow band between $0.22 and $0.23. A second downward dip in the week took the price to $21 where SAN/USD pair received a support level. 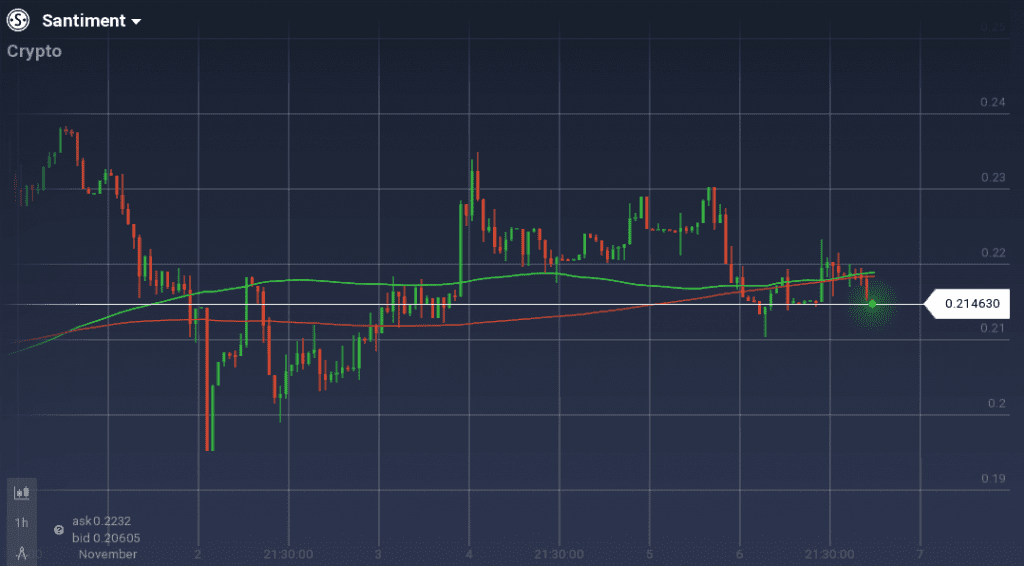 In the daily chart, the SAN/USD pair is mostly fluctuating between $21 and $22. But recently another downward movement can be observed.

Considering the oscillators, both Stoch and RSI are nearing the overselling zone. MACD is also running bearish with a possibility of a crossover.

Against Bitcoin, SAN depreciated more than 16% over the week. The support level at 0.000029 helped in stabilizing the value after the steep dip, and the pair is currently trading at 0.000030 BTC.

Bitcoin Price and Trading Volumes. Is There a Connection?

BTC Keeps Going Down After Its Biggest Daily Crash in Months