Watch Out for These 4 Common Trading Biases

We’ve compiled a list of the most common trading biases and how you can overcome them. Don’t let biases be an obstacle to your trading success!

This one is probably the easiest bias to fall for without even realizing it. Recency bias is placing too much importance on a recent trade. Focusing on a specific moment or event prevents traders from thinking long-term and focusing on the big picture. It limits traders’ ability to analyze the markets effectively.

Overcoming this bias requires taking a step back every once in a while. Rather than focus on your most recent trading experience, look at your trading results over an extended period. This is where keeping a trading journal can come in handy.

When traders search for information that supports their own point of view, they are guilty of confirmation bias. An example of this is trading a position and mainly focusing on indicators or market behavior that validate staying in the position, potentially ignoring signs of bearish trends.

How can you avoid confirmation bias? Keep an eye out for signs against making a trade, not just reasons for executing it. 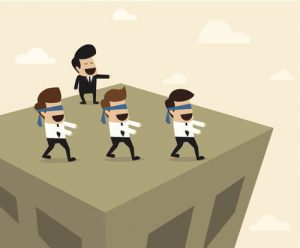 Traders are human. As humans, we have a tendency to follow the crowd and do as others do. However, just because other traders are pursuing a particular trade doesn’t mean it’s necessary to do the same. True, market sentiment is important, but gauging it incorrectly can lead to a bad trade.

News and trader commentaries can be valuable resources, but every trader should conduct their own analyses and plan trades accordingly. Don’t hesitate to go your own way.

While all biases are dangerous, loss aversion bias can be the most detrimental. Loss aversion is best summed up by the phrase “the pain of losses is stronger than the pleasure of gains.” In other words, traders sometimes prefer to avoid a loss over realizing a gain. Traders should consider the rules of risk management, but loss aversion bias can prevent one from catching a big move. Traders should also know when it’s time to cut their losses instead of holding onto a bad position.

One way to combat this line of thinking is to accept that losses are an inevitable part of trading. Strong traders need volatility and risk in order to make gains. It’s all about having a plan. Tools such as stop loss can also help, given that you set it up with loss aversion bias in mind.

Are you guilty of the biases mentioned above? If so, don’t fret — now you know how to recognize them and take control. Look out for these biases on your next trade!

Using Support and Resistance in Trading

A Trading Checklist to Prevent Mistakes

Vasiliy Chernukha·24.04.2019
Close
We use cookies to understand how you use our site and to improve your experience. By clicking "Got it" or by continuing to use our website you agree to their use.
Cookie settingsGot it
Manage consent