The digital coins in the market are trying to move in a positive track since a while. However, the resistance on their way and the dominating bear has become a massive obstacle on their progressive path. Though not significant according to crypto standards, the market added $7 billion in last 24 hours and thus the total market cap went up to $266 billion.

EOS has become one of the top gainers in the market among the top coins. Though there was no significant bull, the lack of bear and a gradual upward inclination has turned out to be very efficient. The coin gained 7.7 percent on the daily chart, which added to the 5.1 percent weekly appreciation. In total, the EOS holds $4.9 billion in market capitalization and thus capturing only 1.8 percent of the entire market. Even with the gain, there was so significant increase in treading over the hours, as the volume was recorded to be $267 billion for last 24 hours. 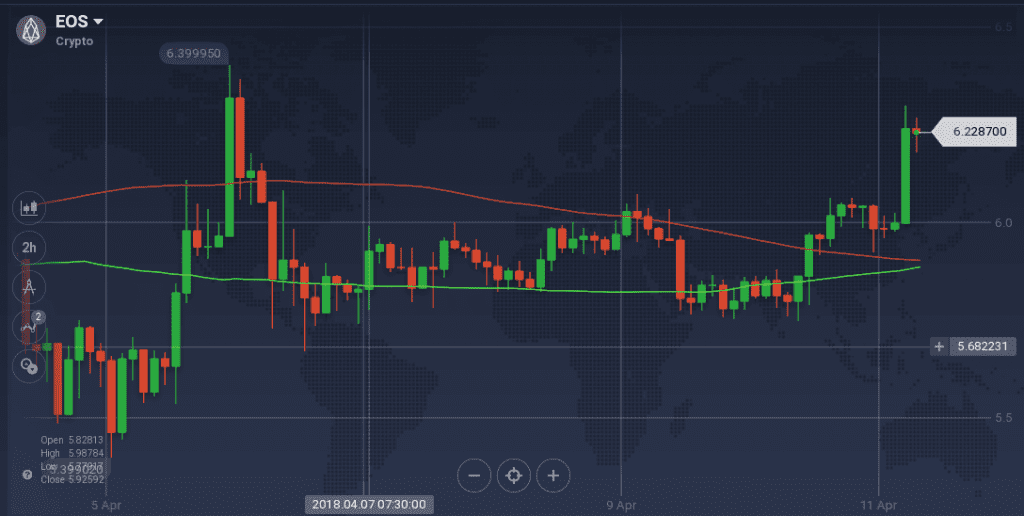 EOS started the weekly session by pivoting from around $5.5, a level where it found a strong support, to reach the weekly peak at $6.4. However, the peak resistance resulted in a classic pullback and the coin went down until it found support at $5.7. Though EOS quickly tried to recover its prices, it faced resistance at different levels – between $5.9 to $6.0. Ultimately, the resistance pushed the price downward, until it found support again at $5.7.

On the daily chart, the coin is showing a positive trait as it has maintained an upward journey. Though it faced resistance at $6.0, the demand has taken the price to $6.2.

The recent positive movement has made the indicators to run bullish. However, the oscillators – Stoch and RSI – are tending to make a reversal from the overbuying zone. RSI is at 87 percent. MACD, on the other hand, is going fully bullish and is accompanied by ADX.

Omise Go is an old timer on IQ Option and its performance on the last week’s charts are quite impressive. The coin appreciated by 2.4 percent on the daily chart. Though its week-on-week appreciation is mere 1.5 percent, it was mainly due to massive drop it incurred at the start of the week. It, however, maintained a strong trend after that. With the long-running bear on the market, OMG went down sub-one billion and is attracting a very few traders, as the trading volume was mere $30 million. 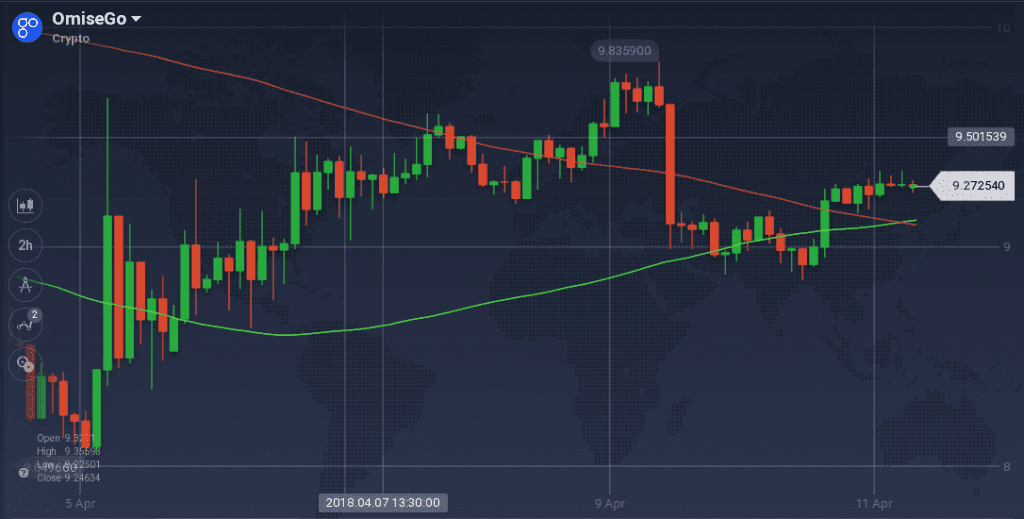 On the weekly chart, OMG maintained a bullish run after a massive drop to $8. The coin pivoted with force and maintained the trend for quite some time till it reached the weekly peak at above $9.8. The coin suddenly took a hit and dropped from the peak to below $9, until it found support at $8.8. The coin is trying to recover its value and is on the rise again. However, it is facing some resistance around $9.2.

Though the drop of the coin from the peak caused the indicators to fall, its tendency to bounce back forced them to soar. Stoch and RSI both went above the overbuying mark, however, due to the resistance, they have a downward inclination now. 100 SMA on the weekly chart is pushing to go over 200 SMA with a recent cross-over.

The cryptocurrency market is in a weird state right now. The fluctuating nature is not allowing any steep bullish movement, but on the positive side, it is also resisting any massive dip. With all the advancements going on around the world regarding crypto regulations, let’s see how long the market remains in this state.

IQ Option·12.04.2018
Close
We use cookies to understand how you use our site and to improve your experience. By clicking "Got it" or by continuing to use our website you agree to their use.
Cookie settingsGot it
Manage consent