Santiment is having some of its best weeks in the currently soaring crypto market. The token again touched a new high this week and gained 28 percent against USD over the week. The market cap of the coin also reached above $271 million and in the last 24 hours, trading volume of over $12 million is recorded.

For SAN/USD, the week started with a jump in the value. Within 24 hours, the pair reached $4.3 from $3.5. But it had to face the strong resistance at $4.3. But also due to support levels forming between $3.9 and $4.0. But ultimately $3.9 acted as a pivot and initiated an upward movement. Within the next 24 hours, the token reached $4.8 to touch an all-new high. But the peak resistance pushed the token down until it found the support at $4.2. 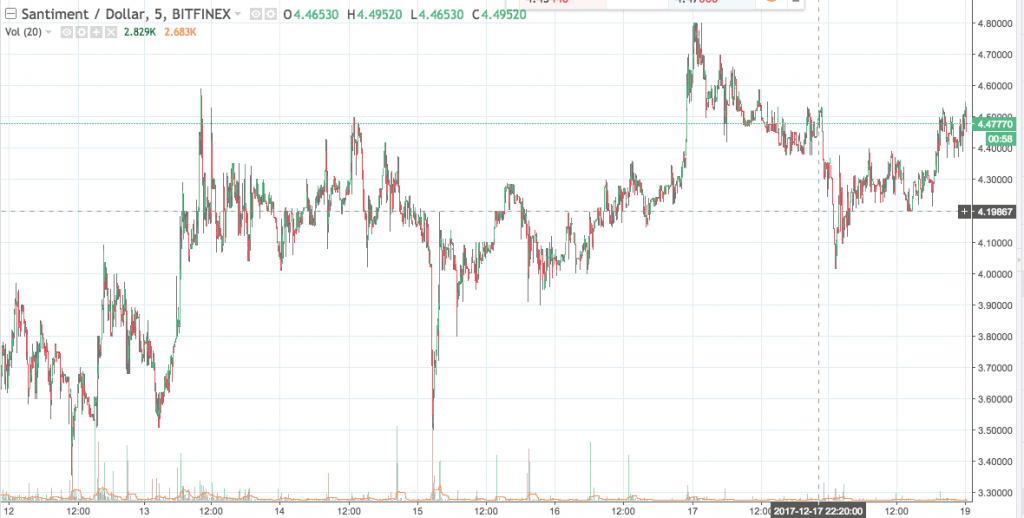 In the daily chart, with the support at $4.2, the pair is recovering, but it is recently facing a new resistance level at $4.4. The token gained around 4 percent in the last 24 hours.

Due to the resistance, the technical indicators are stabilizing. Stoch is around 40 percent and RSI is at 48 percent. Though still running bullish, MACD has slowed down by the recent resistance.

Next article How to Create Your Own Cryptocurrency?

Bitcoin Price and Trading Volumes. Is There a Connection?

Vasiliy Chernukha·18.09.2017
Close
We use cookies to understand how you use our site and to improve your experience. By clicking "Got it" or by continuing to use our website you agree to their use.
Cookie settingsGot it
Manage consent