Australia is benefiting from rich natural resources and industrial production, making it be one of the most productive countries over the world. Australian economic growth relies heavily on exporting raw commodities; therefore, any volatility in commodity prices or demand for raw materials can pose a threat to the development of this exporting country. The Australian dollar apparently is called a commodity currency, which represent primary characteristics of the country ‘s economy.

Known as the largest workshop with 40% of the world production is done over there, Chinese growth becomes a primary factor that most likely impacts those nations that this country is closely associated with. To maintain the manufacturing, China should import resources and raw materials (iron, copper, gold, etc.) to fuel this industrial engine, and then export the finished goods to the rest of the world.

China has become the biggest trading partner of Australia and a consumer of Australian iron ore and coal.  Australia is having stronger link to Chinese growth than any country, which has economic relation with China, does because the country’s economy depends heavily on the foreign investment and more sensitive to volatility of global commodity prices.

Chinese economic data releases tend to impact the Australian dollar the most among the major currency pairs. Strong China economy typically implies that the Chinese demand for commodities from Australia could increase, which in turn can drive the value of Australian dollar upward while weak Chinese data could hint at a downturn in trade with Australia that become a negative factor on the Aussie.

As we mention above, any slowdown in the economy of China, that will naturally affect the need and demand for Australian commodity, have a strong impact on the Australian dollar, undervaluing its value. As a result, a reduction in the rate of growth regarding inflation in China could simultaneously reduce the inflation of the Australian economy. If inflation runs to low, central banks (RBA) look to stimulate the economy by lower rates, that causes the value of Australia drop down. 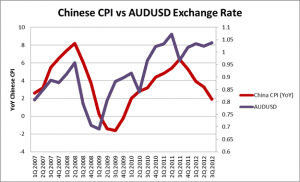 However, as of late, these 2 lines are diverging as the China CPI continues to soften at 34 month lows while the AUD/USD exchange rate remains at elevated levels. Therefore, a surprise China CPI reading to the downside may create an environment where the AUD/USD ‘catches up’ and sells off. 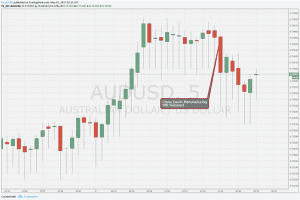 The chart shows AUD/USD dropped after Caixin China manufacturing PMI for April fell to a seven-month low of 50.3. Traders had dumped the Aussie as they bet on a gloomy outlook of the Chinese manufacturing activity and also vague prospect of Australian economy. Data released in May, 2nd, 2017.