As it turns out, this colorless, flammable gas is arguably the most important petrochemical on the planet — and much of it comes from the hurricane-stricken Gulf Coast. Ethylene is one of the big reasons the damage wrought by Hurricane Harvey in the chemical communities along the Gulf is likely to ripple through U.S. manufacturing of essential items from milk jugs to mattresses. “Ethylene really is the major petrochemical that impacts the entire industry,” said an expert. Texas alone produces nearly three quarters of the country’s supply of one of the most basic chemical building blocks.

Ethylene is the foundation for making plastics essential to U.S. consumer and industrial goods, feeding into car parts used by Detroit and diapers sold by Wal-Mart. With Harvey’s floods shutting down almost all the state’s plants, 61 percent of U.S. ethylene capacity has been closed, according to analysts. Ethylene occurs naturally — it’s the gas given off by fruit as it ripens. But it also lies at the heart of the $3.5 trillion global chemical industry, with factories pumping out 146 million tons last year. Processing plants turn the chemical into polyethylene, the world’s most common plasticthat’s used in garbage bags and food packaging.

When transformed into ethylene glycol, it’s the antifreeze that keeps engines and airplane wings from freezing in winter, and it also becomes the polyester used in textiles and water bottles. “The combination of Harvey’s path, duration and rainfall total is wreaking havoc with the supply side of the U.S. chemicals industry on an unprecedented scale,” said an Analyst. “We certainly haven’t seen anything quite like it in our 18 years of following chemical stocks on Wall Street.” The sudden dearth of ethylene and other materials is being felt up and down the supply chain. More than half of the country’s capacity for making polyethylene plastic has been shut down in the past week. More than 60 percent of production of polypropylene — another plastic, has been curtailed.

$1 trillion Fund Bleak View on Global Trade – Thanks to Trump 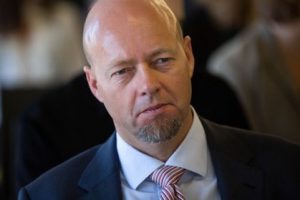 The man running the world’s biggest sovereign wealth fund says there’s every indication that global trade is suffering from something more serious than a temporary slowdown. The Investment Management says the heyday of cross-border trade is probably behind us. “The question investors are asking themselves is if the easy wins already have been made,” he said in interview from his office on the top floor of Norway’s central bank in Oslo. “The global supply chains have in a way had a one-time gain primarily through outsourcing of multinationals to China.”

Norway’s wealth fund owns 1.3 percent of globally listed stocks, spread out over almost 80 countries. And with interest rates at record lows, the investor has cut its long-term return expectations to about 3 percent from 4 percent, even after winning approval from parliament to raise its share of equities to 70 percent from 60 percent.  “I don’t expect that we will act differently in any similar crisis in the future,” he said. As the fund approaches $1 trillion in value, its stated goal is to safeguard today’s oil wealth for future generations of Norwegians.

It has surged in size since its inception two decades ago, generating an annual nominal return of 5.89 percent. Norway’s government last year started taking cash out of the fund for the first time, to make up for lower oil revenue. Withdrawals are set to hit about $9.3 billion in 2017, and remain at that level in coming years amid stricter fiscal rules.

U.S. consumer spending increased by less than estimated in July, though rising incomes and an upward revision to June purchases put the economy on a stable footing for the second half. The focus now turns to jobs data on Friday for more clarity on the next move in interest rates from the Fed. The latest economic statistics reinforced that price pressures remain benign, while GDP and jobs growth are robust.

In Asia, Caixin’s China PMI beat estimates to rise to the highest since February, underscoring sound growth as the backdrop of the once-every-five years Communist Party Congress that will be held on Oct. 18 in Beijing, where delegates plot China’s course over the next five years. Read more here. Asian equities are poised to advance for a third week as investors shrugged off geopolitical concerns after North Korea lobbed a missile over Japan. Risk appetite returned as diplomatic efforts to contain the hermit kindgom’s nuclear program continue.

Google is losing allies across the political spectrum 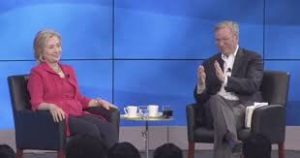 Eight years ago, Google was on top of the world. People across the political spectrum saw the search giant as a symbol of high-tech innovation. During the just-completed 2008 presidential campaign cycle, candidates as diverse as Ron Paul, John McCain, and Barack Obama had all made pilgrimages to Google’s Mountain View headquarters to burnish their reputations for tech savvy.

Even better, Google soon had a close relationship to the newly elected president, Barack Obama. “Google was riding high on the fact that Eric Schmidt was campaigning for Obama,” said a n expert. “There was a lot of attention paid in the press to the fact that Googlers were starting to work in the White House.” With so many Googlers in government, Google had an outsized influence on policymaking during the Obama years. But today, Google is in a different situation. Most obviously, Schmidt worked hard to get Hillary Clinton elected president, and Clinton lost.

The issues don’t end there. Given Silicon Valley’s liberal views on social issues and Schmidt’s love for Democratic politicians, it was probably inevitable that conservatives would sour on the search giant. But the larger problem for the search giant is that the company has been losing support among Democrats as well. A growing number of liberal thinkers believes that the concentration of corporate power was a major problem in the American economy. And few companies exemplify that concentration more than Google.

What to Expect from Fastenal’s Earnings Report (Released July 12)?