To understand the appearance of Ethereum Classic, we should first check the history of another cryptosystem known as the DAO (from the “decentralized autonomous organization”). It came out in May 2016 after an initial coin offering that became the largest one at that time. In essence, the DAO was a decentralized venture capital fund, designed to finance all future decentralized applications.

The DAO was fully transparent and flexible, which got the attention of many investors. From May to June, DAO raised more than $ 150 million in Ethereum or 14% of all Ethereum tokens released at that time. The system was created on the Ethereum blockchain, and its token could be acquired in exchange for Ethereum tokens by those who wanted access to DAPPS (decentralized applications).

The DAO had a way back function for those who did not agree with some of the DAPPS and wanted to take their invested Ethereum coins back. This feature in the DAO code was called “Split Function.” Moreover, one could build its “Child DAO” with this function.

In order to make sure everything goes smooth, the contract stipulated that one cannot spend his recuperated Ethereum tokens for 28 days after splitting off from the DAO. In fact, there were more smart-contract-based codes to maintain the system safe, but unfortunately, it had a vulnerability in the code, which later was the primary cause for dividing the Ethereum community.

The Attack on the DAO That Led to Ethereum Classic

As we mentioned, the DAO system had a weak point somewhere in the code, and the hackers didn’t wait for too long to exploit it. However, before getting further, it’s essential to make it clear that, even if the DAO was built on the Ethereum blockchain, the latter was not guilty of the code vulnerability. It just relates to the DAO alone, while Ethereum is only the background or space for it.

So, in mid-June of the same year, after one month of happy existence, the hackers exploited the weak point in the code and took out one-third of the funds in the DAO, which was around $50 million at that time (3.7 million ETH tokens).

The hackers acted this way:

The hackers took out more than $50 million in Ether and moved the funds to their Child DAO, but there was one more thing left. As you already know, they could spend Ether funds only after 28 days, which meant the funds were blocked there for almost a month.

Checking For a Solution

The Ethereum community was in a panic after the attack, and it wanted to find a reasonable solution. Even thought Ethereum platform couldn’t stand guilty for the DAO’s loophole, people lost confidence in it. The Ether price fell from $20 to around $12.

Since hackers could not spend the funds for 28 days, the Ethereum community had enough time to choose between three possible solutions: leave it that way, initiate a soft fork or launch a hard fork.

Well, the Ethereum Foundation went for the last one – hard fork, but they actually deceived the crypto community about the unanimous decision to approve it. The majority of miners did not participate in the voting, and their votes were counted as “for.”

The problem with the hard fork is that once you split the network, there is no way back. During the hard fork, the blockchain goes on a different path, and everyone should move to this new chain if they want to access the updates. Those who don’t want to move to the new after-fork system would not get the access to any upcoming updates.

Well, so this is exactly what happened – a part of the community didn’t want to shift to the new system, so they continued with the old chain – the so-called Ethereum Classic (ETC). The new system that followed the hard fork was supported by the majority of investors and “heavy players,” so it kept the same name – Ethereum (ETH). 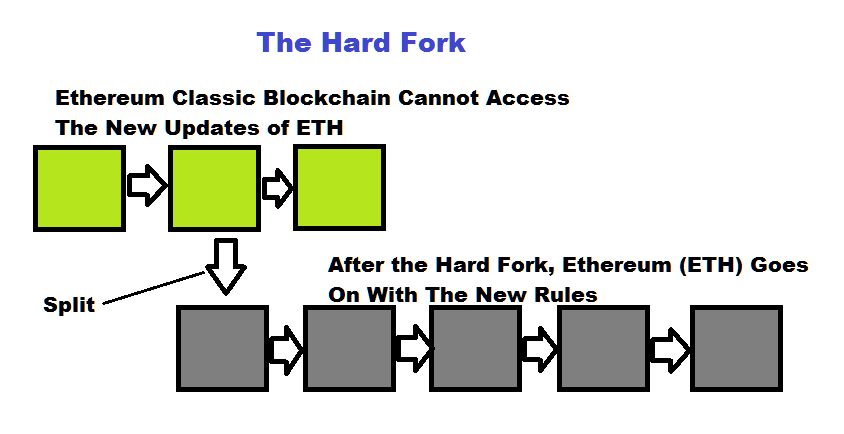 As you may guess, the hard fork was seen as a necessary move to refund all the stolen cryptocoins after the DAO attack by initiating a smart contract with the only function “withdraw” to provide the victims with one ETH for every 100 DAO.

However, it suggested that a split in the system, which is an intervention into the very basis of Ethereum blockchain. Many people didn’t like it because Ethereum pledged a fair and transparent system that is immutable and perpetual. It had to show absolute resistance to any human intervention. This was the central argument of those who decided to keep with the old chain, Ethereum Classic. They said that more hard forks might follow if the community allowed that one – and they are right.

For example, a hard fork is expected at the end of October 2017. Known as Byzantium, it aims to remove the effect of malicious presences within the network. Byzantium is only the first planned hard fork from broader Metropolis stage of the Ethereum project. Today, the update is at the testing level, but official changes will start soon.

So, the ideological argument was so strong that the anti-hard fork community could not be convinced even if all the Ethereum major players, such the founders themselves (Vitalik Buterin and Gavin Wood), left for the new chain.

Unfortunately, those who stick with Ethereum Classic cannot access the updates, such as Ethereum’s shift from Proof Of Work (PoW) To Proof of Stake (PoS).

So, Ethereum Classic operates with the old algorithm from pre-hard fork period. Today, the cryptocurrency became the 12th largest one by market capitalization.

The market cap for ETC is currently at $1.1 billion, having a medium-term bearish dynamic. 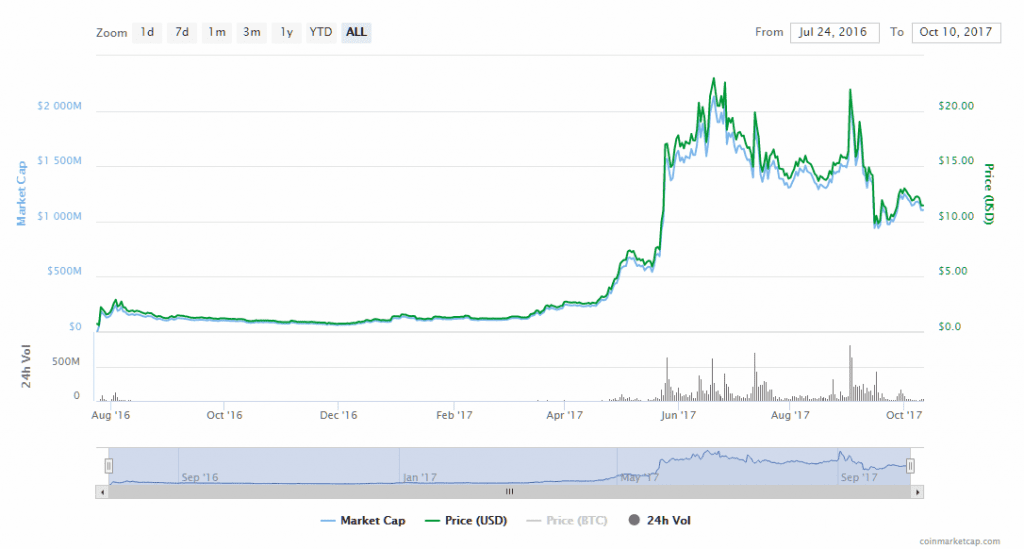 Here are some advantages of ETC:

Here are the main drawbacks of the cryptocurrency:

Even if all the media attention goes to ETH, the “Classic” version gets its portion as well. It can still be considered a good investment option in your crypto portfolio.

In April, Grayscale, the subsidiary of Barry Silbert’s Digital Currency Group, started the Ethereum Classic Trust. This is only one of the events that allow institutional traders invest in ETC. It shows that big players still have interest in it.

To support the price, ETC community decided to introduce a hard cap on the issuance of tokens. Accordingly, it was agreed that the total ETC stock should never go beyond 230 units. As for ETH, it doesn’t have any hard cap on total ETH issuance.

However, there are significant risks one should consider. The Ethereum Foundation still keeps ten percent of the ETC that they got after the hard fork event, and the DAO hacker holds approximately 3.36 million ETC, which is 3.65% of total capital. If one of the mentioned parties enters the market, ETC will go down in price.

In the end, ETC may have its word – who knows?

Robert Shiller: Bitcoin Could Be Here in 100 Years

Bitcoin Futures: The First Time in a Regulated Market

IQ Option·18.12.2017
Close
We use cookies to understand how you use our site and to improve your experience. By clicking "Got it" or by continuing to use our website you agree to their use.
Cookie settingsGot it
Manage consent