EOS Stands Out with Double-Digit Gain in a Bearish Market

The grasp of a strong bear on the market has become worrisome for the traders. Its been days the coins are constantly bleeding and there is no sign of any recovery. However, some coins outperformed the market’s trend and gained in double digits. Overall, due to the market stagnation, the total market cap is merely at $298 billion.

Litecoin has stumbled upon one of the major roadblocks on its way due to the abrupt shut down of LitePay. The result of this clearly reflected on the market as it slipped quite a lot after that. Even in the past 24 hours, LTC went down by around 5 percent, fueling a weekly depreciation of 22 percent. Its market cap also dropped to $7.5 billion and the trading volume in the last 24 hours was $334 million. 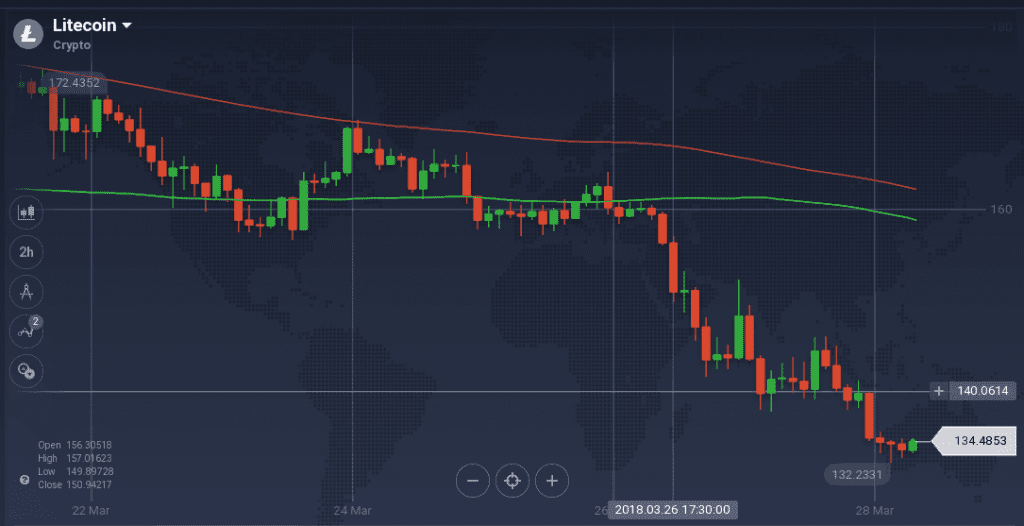 Bear dominated the entire weekly chart of LTC with two steep slides. For LTC, the week started as it slipped from $174 to $158. That level tried to act as a pivot and initiate a bull, however, the coin faced a massive resistance at $169 which pushed the price down. Multiple resistance in the vicinity – $165 and $162 – also acted upon as a barrier. However, a support was present around $158.

As the bear clutched the market LTC prices took a slide. The simultaneous news of the shut down of LitePay added fuel to the situation and LTC went down from $160 to the current trading level of $134 – a depreciation of 17 percent in 48 hours.

As there is no sign of any support, the indicators are running absolute bearish. RSI and Stoch both are running below the overselling borderline for around 48 hours, except at some particular recovery points. MACD and ADX are also running bearish, the former being way below the baseline.

EOS stands out in the crowd of depreciating coins with its double-digit gain in the last 24 hours. The coin is up by 12 percent on the daily chart, however, the weekly appreciation is only 0.5 percent due to the zig-zag pattern of the curve. With a market cap of $4.6 billion, EOS surpassed Cardano and Stellar to be the 6th largest coin on the market. To make an entry to the list of top five coins, it is only $1.9 billion shy of its market cap. With the shooting price, the trading volume also surged at $858 million, of which 52 percent of the trading is done against KRW.

After maintaining a huge bullish climb on the weekly chart, EOS faced massive resistance above $7. However, with support around $6.3 to $6.5, the coin tested the resistance for a while, but failed with no luck. Support at $6.4 gave the coin a base from the pullback. However, it was not strong enough to check the slide of the prices with the take over of the bear. After reaching below $5.3, EOS found a strong support level, and due to other market factors as well, the coin pivoted to above $6. However, it soon faced resistance at $6.3. With support around $5.8, the coin is adamant to breach the resistance level.

Due to the gaining prices, the technical indicators are soaring as well. The oscillators – Stoch and RSI – are on an uprise, but both are below the overbuying zone. The current value of RSI is 60 percent. MACD is also hinting some bullish signals. The long bullish run also helped 100 SMA to climb above 200 SMA.

Twitter has publicly announced that they will start instituting a ban on cryptocurrency ads, including ICOs, following in the footsteps of Google and Facebook.

Litecoin has taken a significant price hit since promised payment processor LitePay has informed them that it has closed up shop.

The confirmation of Coinbase on the addition of ERC20 tokens have boosted the price of such tokens on a bearish market.

No doubt the market is suffering right now. Based on the trading activity, it seems the traders are pulling an entry and exit scheme to hoard some profits. However, it might be a good time to gather some coins at discount.

Previous article Facebook: Short Too Good for You to Pass

Next article Bitcoin’s High Mining Cost and Its Consequences

This Is Why Bitcoin’s Price Moved Up Today

Vasiliy Chernukha·11.10.2017
Close
We use cookies to understand how you use our site and to improve your experience. By clicking "Got it" or by continuing to use our website you agree to their use.
Cookie settingsGot it
Manage consent