The current rumble in the cryptocurrency has affected the coins very badly. Though started with FUD, many recent governmental curbs are now fueling the depression. The total market cap of the coins has gone down to $282 billion. 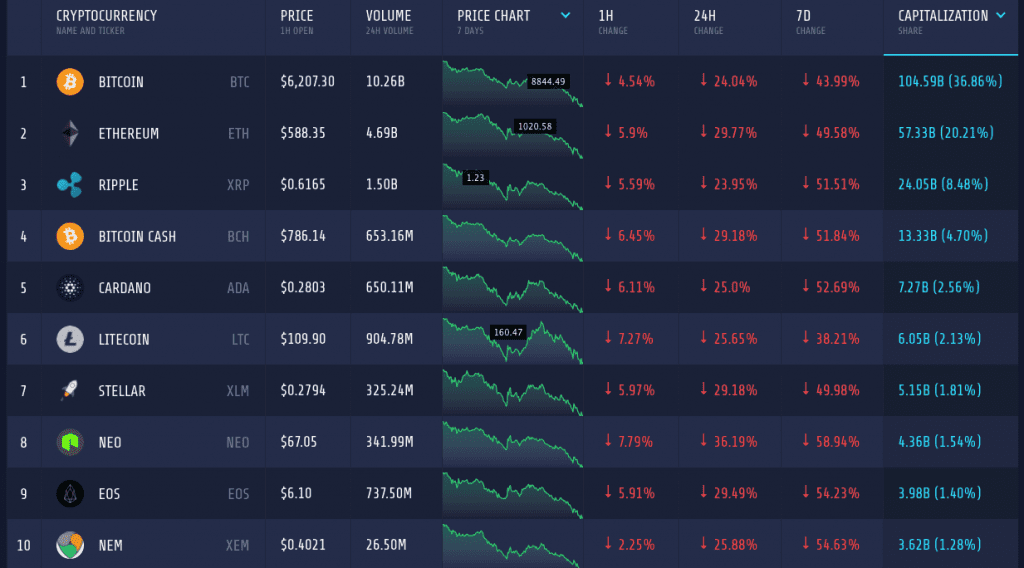 Bitcoin is badly hit by the market dip. Around 24 hours ago, BTC was struggling to maintain its value above $8000; now it’s doing the same but for $6000. Bitcoin depreciated 24 percent in last 24 hours and whopping 44 percent in 7 days. Its market cap also dropped to $104 billion. 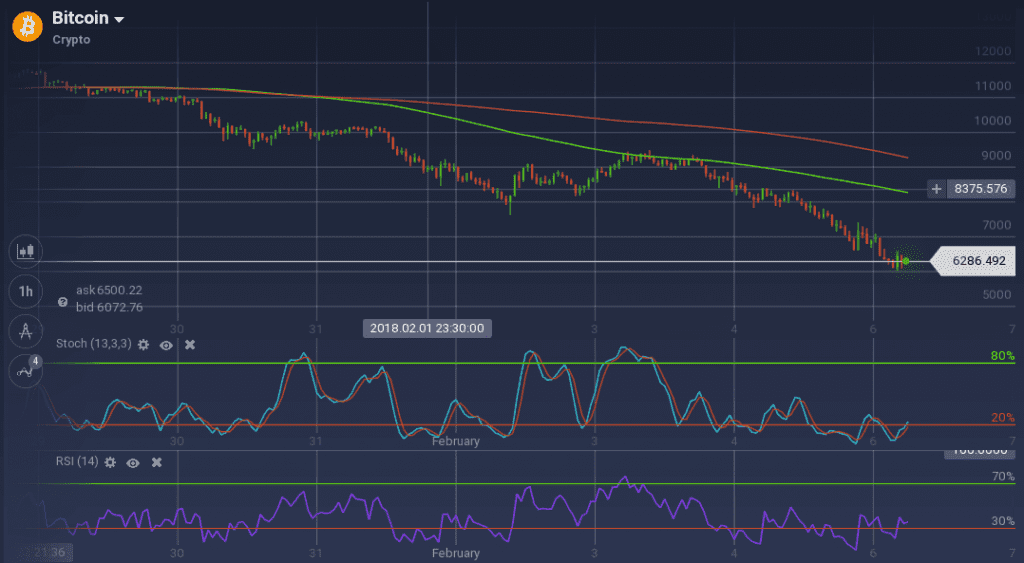 After falling to $8000, BTC/USD price rebounded, and with some support available between $8260 and $8560, the pair went up to $9360. But then the bearish run took the pair over again and its value started to dip. On the way to its bearish journey, Bitcoin tried to find some support at $8000, but it could not hold the value. The coin is now trading around $6300 without the presence of any support around.

With the steep dip, Stoch is hovering in the overselling zone for a while, but now it is indicating an upward movement. RSI is at 34 percent and giving mixed signals.

Ether, the second biggest coin in the market, is also experiencing a very bad bearish run. Its market cap is now mere $58 billion, much less compared to its peak at $138 billion. The coin depreciated 30 percent on the daily chart and 50 percent on the weekly. The dumping of the coins also increased the trading volume and in the last 24 hours, it was $4.69 billion for Ether. 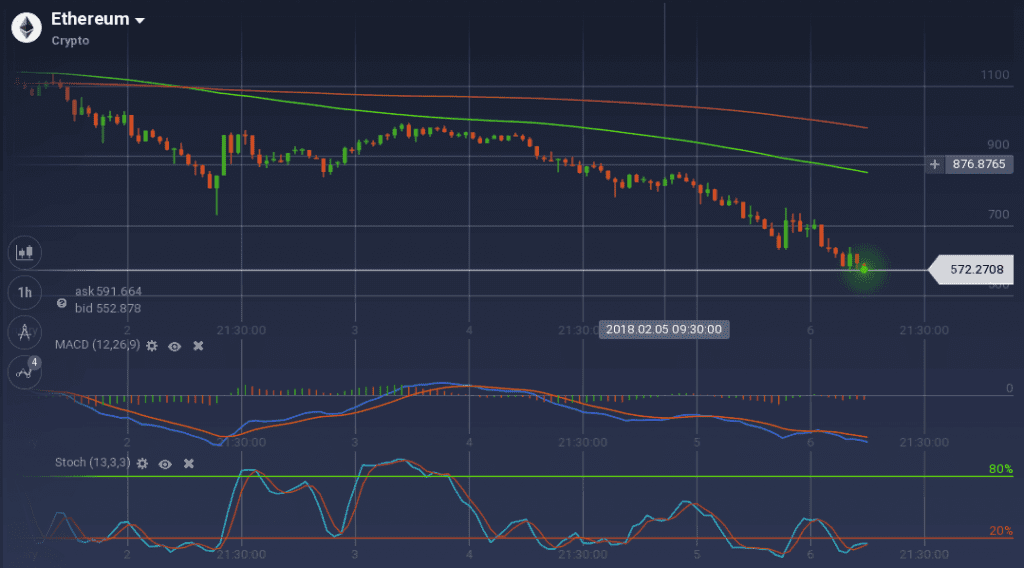 In the midweek, Ethereum found some support between $850 and $880. The support helped the coin to recover its value and touch $990. But the stiff resistance there checked any further growth. Eventually, the bearish run took over and the coin dropped from $960 to $580 in mere 48 hours. The coin is now experiencing a free fall with any support present.

The technical indicators are giving mixed signals. MACD is running bearish, so is RSI. But Stoch is showing some signs of recovery from the overselling zone.

Ripple, the coin which once made billionaires, is also not immune to the market crash. In fact, it lost more than any other top three coins on the weekly chart with more than 51 percent depreciation. In the last 24 hours, the trading volume of XRP was $1.5 billion and the South Korean market is the leading the dumping with around 50 percent of the market share. United States market is also having a significant share with 15 percent. 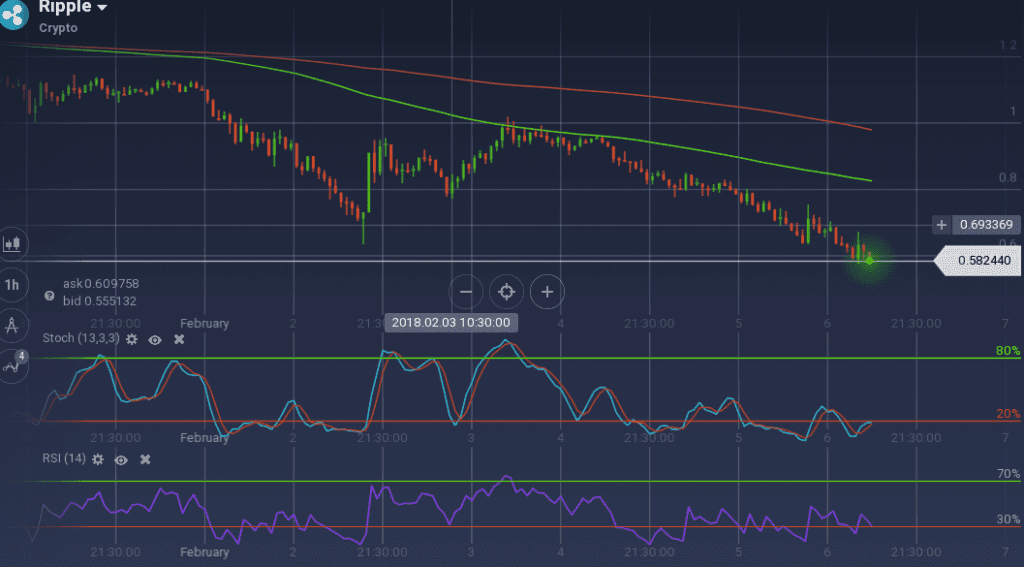 With a rebound in the midweek, after a long bearish run, XRP went up from $0.71 to $0.98. Though the coin faced strong resistance there, it tested it for a while but failed. Soon with the strong bear taking over, XRP/USD’s value started to fall, and the coin went below $0.60.

With the dominant bear, 100 SMA is running below 200 SMA with a significant gap between them. Other indicators are giving mixed signals. Stoch is showing signs of recovery while RSI is moving down. Both the oscillators are below overselling mark.

China further tightened the cryptocurrency noose. This time, the Chinese government blocked access to all the international cryptocurrency websites in its highly censored internet. Now, it will be very difficult for the crypto enthusiasts in China to trade cryptocurrencies, as any visit to the banned site will be viewed as illegal. The impact of this move is already reflecting on the market as the coins continue to plummet.

Three of the biggest banks on the Wall Street – JP Morgan Chase, Bank of America and Citigroup – have banned the cryptocurrency transactions via credit card.

In India, the government is gearing up to put regulations on the cryptocurrencies by March 31st after declaring them illegal tender.

The market is falling and there are no signs of recovery. The way the market is moving right now, it cannot be said where the prices will end up finally. But for the traders who like to short sell the prices, this might be a big opportunity.

Why Bitcoin had a Bad Week?

Bear Sentiment — Capitalizing on the Downfall of the Cryptocurrency Market

IQ Option·08.07.2018
Close
We use cookies to understand how you use our site and to improve your experience. By clicking "Got it" or by continuing to use our website you agree to their use.
Cookie settingsGot it
Manage consent