Crypto Analysis: Stellar is The Leading Gainer in Past 24 Hours

The cryptocurrency market is back on its usual track again. After losing prices for a couple of days, almost all of them are recovering. The entire economy has now reached $534 billion, and more than 1400 coins are present today on the market. But there is no stopping, as more and more players are jumping into this everyday.

For Ripple, the past week was very eventful. Bearish run dominated the week, but the steep bulls compensated the falling prices. Ripple is still the 3rd largest coin in the market with a market cap of above $53.3 billion. The volatile prices are also attracting a lot of traders, as in the past 24 hours, above $2.6 billion in trading volume was seen.

For XRP/USD, the week started with a jump from the pit and the pair went to $1.74 from $0.89. But the resistance at $1.7 did not allow it to rise any further. Soon another resistance level was also formed at $1.62, but support was also present at $1.47. Finally, the bearish rally took the entire market, and ripple was no exception to it. The support could not hold the prices and the prices began to fall. 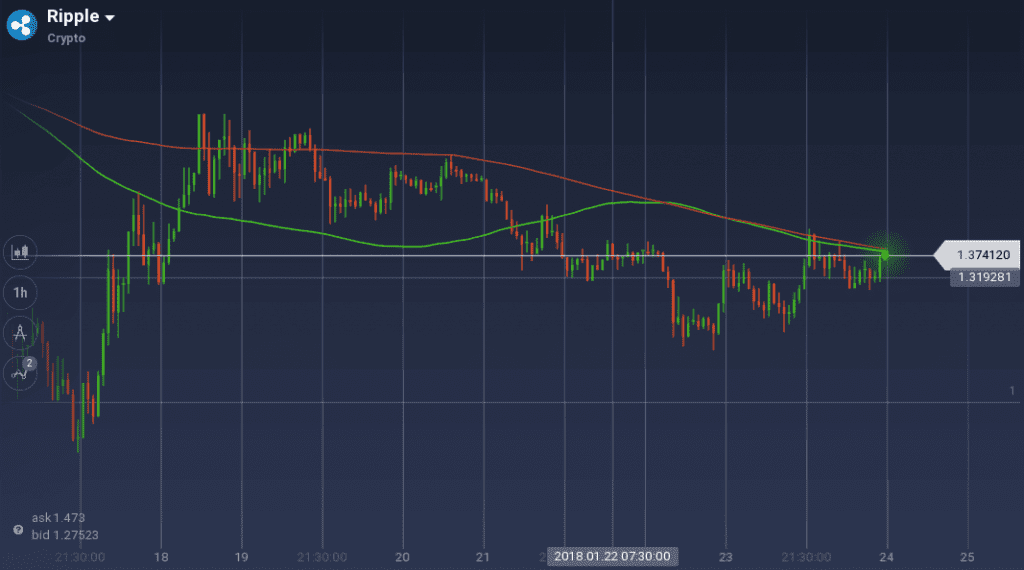 XRP/USD dropped to $1.15 until it found some support. The support also pushed the prices upward, but another recent resistance in that vicinity is checking the growth. Currently, the coin is facing the resistance at $1.4, but with support present at $1.29, it is also testing the resistance level.

As XRP/USD is testing the resistance, the technical oscillators are also in a soaring mode. Stoch and RSI, both are going upward. RSI is currently at 64 percent. The recovery from the bearish run has also narrowed down the gap between 100 SMA and 200 SMA.

Stellar is one of the lead gainers in the past 24 hours. The volatile price of the coin is also attracting quite a good number of traders, as in the last 24 hours, more than $248 million in trading volume was recorded. The It also holds a market cap of above $9.4 billion. 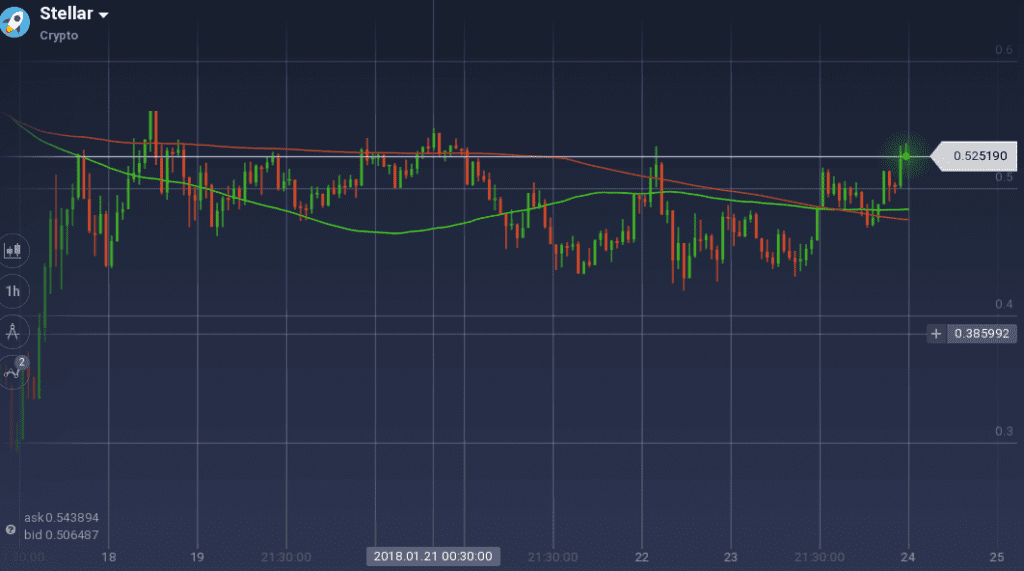 Almost throughout the week, the coin faced tough resistance at $0.54, but it also had support at $0.47. But when the bear took over the market, this support level was not good enough, and the prices dropped, until $0.42 held the prices.

All the indicators are also running bullish due to the recent recovery of the coin. Stoch has approached the overbuying zone, and so is RSI, currently being at 68 percent. MACD curves are also soaring.

The upward run also resulted the 100 SMA is going above 200 SMA, indicating the dominance of the bull.

XLM is also soaring against Bitcoin. XLM/BTC pair is trading at 0.000048 BTC, gaining 50 percent over the week.

The biggest development in the crypto market in the recent hours came from South Korea as the country has finally legalized the crypto trading, but the authorities also made it clear that to prevent any illegal activity, it will ban all the anonymous account from January 30th.

Also, the Japanese cryptocurrency exchange BitFlyer is set to make its entry in the European market as it received approval from the authorities.

It is to be noted that, this week, the Wall Street banking giant Morgan Stanley announced that it will clear the bitcoin contracts for its clients.

This past week was rough from the entire crypto market. But amid all the hurdles the market is moving forward again. Also, as days are going by, more and more mainstream institutions are opting for the cryptocurrencies. So we can surely assume that the crypto economy has a bright future.