Catalonia Wants to Be Independent. Who’s Next?

The paradigmatic cases of modern separatism are represented by Czechoslovakia (former Slovakia, Czech Republic, Moravia, and Bohemia), Scotland, the ever-present case of the Basque Country, and the current convulsive Catalonia.

The economic and social situation in Spain, as a consequence of the crisis of the mid-2000s (the unemployment rate is now 18%), has only increased the tension between Spanish and Catalans. Separatist groups have multiplied, divisions have deepened, and results are in sight. 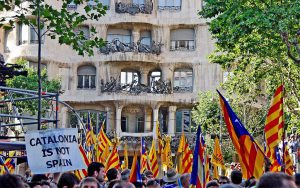 During the last weekend, Spain, and more specifically Catalonia, have been on the news all over the world. What happened? A few months ago, the Catalans had decided that on the first day of October 2017, a new referendum would be held to determine the permanence, or not, of Catalonia as part of Spain.

During the last weeks, as the day of the referendum approached and the political tension increased, the government of Mariano Rajoy decided to take extreme measures: Spanish justice cancelled the consultation and, as if this had not been conflicting enough, his promoters were arrested.

Ten days before the day, a judge in Barcelona launched an operation in which those responsible for the call for the referendum were incarcerated. Police officers carried out more than 40 raids and detained a total of 14 people. The result: massive protests in the streets of Barcelona and throughout Catalonia. 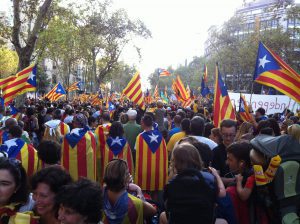 The days continued to pass and the tension did not subside. The Catalans seemed willing to carry out the consultation in any way. And so they did. Last Sunday, October 1, 2017, the Generalitat de Catalunya managed to open most of the 2,500 polling stations. Catalans turned to vote in mass. The National Guard intervened and chaos took over.

Volunteers had managed to carry out the logistics of the consultation, even though it no longer offered any legal guarantee. The police evacuated several of the sites that would serve as polling stations while human chains protected the establishments. Protesters clashed with security agents. 1000 people had to be cared for by the medical services. Mariano Rajoy said: “We have done what we had to, acting with the law and only with the law.”

The economy of Catalonia relies mainly on the industrial sector and services. The economic activity of the region constitutes 20% of the economy of Spain. The GDP of the province is well above the average of the European Union. With this panorama and a long history of divisions, territorial disputes, and conflicts regarding autonomy and identity, Spain and Catalonia have always had a somehow tense relationship. This tension reached, last weekend, its peak.

Time will tell how this situation ends. In the meantime, the story shocks Spain, Europe and the world. Meanwhile, it’s possible to start thinking, what would be the consequences of a potential success of the Catalan separatist experience for the rest of Europe? In case the independence of Catalonia succeeds, European geopolitics would be deeply shocked. It happens that there are several areas of Europe that are under the separatist threat. Here a review of the two most delicate cases:

Until 1707 a sovereign State, Scotland has since been under the administrative region known as United Kingdom of Great Britain and Northern Ireland. Although the country has its own independent government, based in Edinburgh, most of the Scots would like to abandon the United Kingdom. There are two factors that feed the independentism sentiment of the inhabitants of Scotland. On the one hand, the cultural and historical differences, on the other hand, the oil reserves that are in Scottish territory and of which the United Kingdom benefits today. The debate over Scotland’s independence or not has been going on for decades and remains one of the tensest in Europe.

At the end of 2014, the Scots underwent a referendum to determine whether their country should remain in the United Kingdom. 45% voted in favor of the exit, while the remaining 55% was inclined to stay. Since then, the Scottish Nationalist Party has only grown. The story seems to have, sooner or later, a only one possible ending.

Probably the separatist movement that has caused more violence during the last century in Europe, Basque Independence continues to represent a separatist threat to Spain. The Basque separatist movement, which resulted in the armed struggle led by the ETA, abandoned violence in 2011. During the years in which the ETA was active, almost 1000 people were killed and hundreds injured. 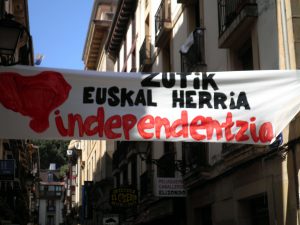 The Basques who promote independence aspire to the creation of a sovereign state in the territories known today as the Basque Country and the French Basque Country. According to data collected by Euskobarómetro, almost 55% of Basques want to become independent of Spain.

The independence of Catalonia not only means a dramatic loss, both economically and politically, for Spain. It also means a green light for latent separatist movements.

Smile to Pay. Now a Reality in China

Vasiliy Chernukha·04.09.2017
Close
We use cookies to understand how you use our site and to improve your experience. By clicking "Got it" or by continuing to use our website you agree to their use.
Cookie settingsGot it
Manage consent