The 80/20 rule describes the ratio of high quality work that can be expected from a body of work, find out how to apply it to your trading account.

Not all trades win, but some win a lot

It goes without saying that not all trades are winners. The point of trading is to weed out as many of the low probability trades as you can, protect yourself unnecessary losses and try to maximize your profits. One way to do this is to use the 80/20 rule. If you don’t know, the 80/20 rule, also known as the Pareto Principal, is a theory that states 80% of effects come from 20% of actions, or in the case of trading, 80% of your gains are going to come from 20% of your trades. 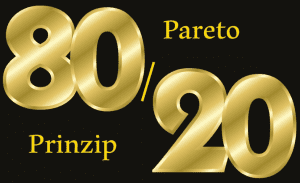 Great, but how does that apply to your account other than as an interesting bit of trivia? For one, it means you need to trade actively. I don’t mean you need to go out and trade every day, or every signal, or every asset, but you do need to trade regularly and as your strategy and technique demand. Not trading may save your capital but it does not open the door to success either. The key at this point is to use a strategy, rules for entry, that help you weed out as many of the bad trades as possible.

By weeding out bad entries the bulk of trades will be positive, providing a solid platform for success. Now, the 20% of winning trades have a higher chance of being great, and not just good. If you aren’t able to make good trades to begin with you will have a much lower chance of making a great trade. In fact, if you do, it will more likely be luck than anything else.

Think about it like this; if a craftsman’s skills allow him to make furniture, or pottery or tools with a 95% rate of success, and 20% of those successes are great, the chances of them being great are a lot better than one who is only able to turn out decent work at a 50% success rate.

Applying the 80/20 Rule to your trading

Assuming you are using a relatively successful strategy there are two applications of this principle that can help cut your average loss and maximize your average gains. The first applies to losing trades. When I trade I pretty much know when it isn’t working out. Good trades don’t usually show much loss, and if they do they don’t last very long. Great trades usually never show losses and keep on moving to new highs. I use stop-losses to protect myself from losses but if I see a trade isn’t working I can close it out before that to save even more capital and move on to the next opportunity. The trick is giving the trade enough time but once you get the feeling it isn’t going right it’s time to get out or at the very least raise your stop-loss.

The second application will help maximize profits. Just like with losing trades, good and great trades are usually easy to spot. They move into the money quickly, the stay in the money and they deliver profits without much question. When this situation occurs the first thing to do is raise the stop-losses to protect capital and early profits. The next thing to do is remove or raise any profit-stops you have set (I usually start with 50% and then raise it to 100%). So long as the trade continues to move in the right direction stop-losses and profit-stop can be increased, bracketing price action in a manner that allows some freedom of movement but not too much.

Four tips for improving your results

The first is to use a good, solid strategy that produces profitable results and stick to it until you master it. The second is to cut losses quickly, better to retain capital and come to trade another day. The third is to let profits run. If the horse is running in your direction don’t stand in his way. The fourth is to trade a lot. The more you trade the better you get, the better you get the better your 20% of great trades will be.

Currency Trends for May 18th: the Intense Sell-Off of USD and Positive Data from Japan

Economic Calendar for August 18th: USD/CAD Moved Up After Last News from Canada

Tatyana Scherbakova·03.09.2020
Close
We use cookies to understand how you use our site and to improve your experience. By clicking "Got it" or by continuing to use our website you agree to their use.
Cookie settingsGot it
Manage consent