The last few days have seen tremendous volatility in worldwide markets. The S&P 500 has lost more than 6% in the last 5 days alone, with similar falls seen in Europe:

Japan and the other Asian markets were hit even harder, with the Nikkei losing 4.7% on Tuesday and the Hang Seng down 5.1%. The digital currency sector has not been spared, although the downturn started earlier in January. Bitcoin has shed 50% of its value year-to-date, with Ripple and Ethereum also posting double-digit losses:

The sudden downswing in equities was fueled by many factors, among them:

Despite the turmoil, the current downturn has to be put into perspective. January saw a significant advance in equity prices, with the S&P 500 rising 5.6%. From the election of President Trump to the January 26th high, the Dow Jones rose a remarkable 45%. On a longer-term perspective, it has risen more than 300% since the March 2009 lows, with only three 10%+ corrections since.

Investors are potentially overreacting as corrections have become more and more rare, while they used to be routinely expected. This ongoing 5% correction was the first one in 312 days, a new record: 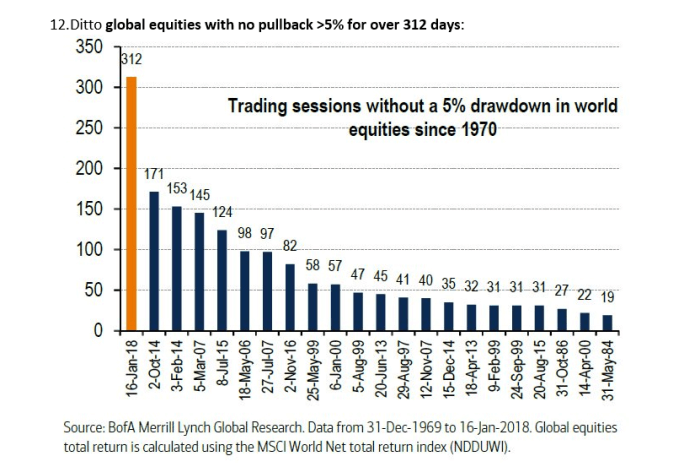 Part of the positive sentiment in January was due to the passage of the Trump administration’s $1.5 trillion tax cut, which has increased GDP forecasts but thereafter increased inflationary fears. Nevertheless, interest rates remain close to multi-decade lows. This makes the opportunity cost of owning equities and alternative assets, including cryptocurrencies, still very limited.

Cryptos themselves are correcting after a phenomenal 2017, where Bitcoin was up 20-fold, Ethereum more than 90 times and Ripple more than 300 times. Oil remains more than 35% below its 2014 highs, while commodities as a group are at a 50-year low compared to stock prices. In addition, even much larger stock market slumps historically do not have an impact on the underlying economy. The 40% correction in China in 2015-16 did not, as did not the one-day 23% crash in U.S. stocks of 1987.

Considering these factors, what is the overall outlook for investors and especially crypto investors?

If U.S. inflationary pressures persist, both stocks, bonds and cryptos will remain under pressure. Commodities would be the bright spot, as they historically perform best when inflationary pressures mount. If U.S. economic data disappoints, bond yields will fall, and equity markets will find support. Developing markets and other economies dependent on US-dollar borrowing would likely bounce back even stronger. At that point, cryptos would find a new base from which to build a renewed uptrend. Because of their inherent volatility, their price gains would be quick and large, possibly gaining back all the ground lost so far in 2018.

Alibaba Founder Jack Ma: Bitcoin Is in a Bubble

Korea: Receiving Bitcoins Is an Act of Taking Profits