Back to Basics: Trading with MACD

As you probably already know, there is no single ‘best’ technical analysis indicator. Each of them has its time and place. However, if asked to choose their favorite tool, a lot of traders would answer “MACD”. Moving Average Convergence Divergence is a trend-following indicator that is used to spot an emerging trend, whether upward or downward. It is by right one of the most effective and commonly used technical analysis tools ever created. In todays’ article, we will take a closer look at the indicator and learn how to apply it in trading.

Moving Average Convergence Divergence will help you spot emerging trends, arguably the most important thing in any trading pursuit. But just as any other indicator, MACD has to be used correctly in order to yield tangible results. And you have to understand, what exactly you are working with.

How to use it in trading?

MACD is a complex tool that can be used in several ways: 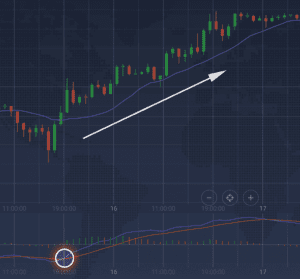 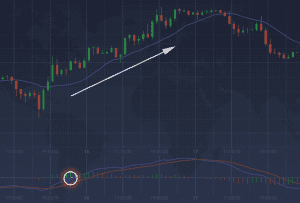 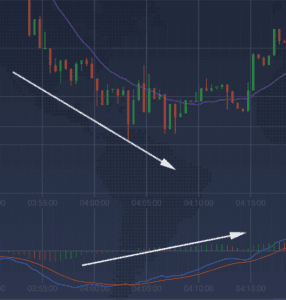 Finally, watch for a thing called divergence. When the price action and the MACD chart demonstrate opposite movement, the trend may soon reverse. A bullish divergence forms when a security forms a lower low and the MACD forms a higher low. A bearish divergence forms when a security forms a higher high and the MACD Line forms a lower high. This is an advanced technique and will probably require some training to be applied correctly. Still, it definitely deserves your attention.

Note that all indicators, no matter how good, can and will provide false signals from time to time. It is, therefore, advised to double check the signals you receive with other indicators or different timeframes (preferably both).

How to set up?

Setting up MACD is easy. Simply do the following:

1. Click on the ‘Indicators’ button in the bottom left corner of the screen,

And you are good to go. Now, when you know how to set up and trade using this indicator, give MACD a try and consider adding it to your trading system.

The Tech Sector Is Breaking Out To New Highs

How to Trade With the Mass Index Indicator

Anticipating the Trend. How to Trade Divergences?

How to Trade Using an Average Directional Index (ADX Indicator)