Interview with VIP-Trader, Who Knows All about IQ Option Tournaments

Today, the IQ Option team interviewed the trader Fabio Spirandelli, who has been working for more than 2 years at the brokerage firm and learned about IQ Option through a friend who introduced him to binary options. Fabio works in the commercial sector. He previously worked for a vehicle repair and trade company, and in Multi-Level Marketing. After some disappointments in Marketing, he came to trading.

– How do tournaments work and what do you need to win?

To win, you need to participate in all the tournaments, practice a lot, put the strategies to work, and adapt to the format and modes of each tournament.

– I participated in several tournaments in the beginning, but I didn’t attach much significance to them (because the initial prize was low and I thought that trading in the real account would give me higher returns). I ranked first several times with a great score, but because I didn’t care and generally did not manage the account, I went broke.

When I went to check the results at the end of one tournament, I realized that the value of the prizes had increased significantly as a result of the buybacks made by traders. I compared the volume of chips that I had before breaking with that of the prize winners, and that’s when I woke up: If I had stopped making transactions with that number of chips, I would have been one of the winners, with a substantial amount.

– Is tournament trading different or similar to trading with a real account?

– Despite the participation, I consider trading in small tournaments a game. The tournament negotiations are similar. Although the transactions are more aggressive, the big advantage when participating in tournaments is the fact that you don’t have the relaxation associated with the demo account or the fear stemming from the real account, since your money is not at risk.

At the beginning of the tournament, there is less fear of losing. You feel calm because the entry fee is low. As the volume of your chips rises and you place on the scoreboard, the psychological aspect changes, and you start trading as you would with a real account. 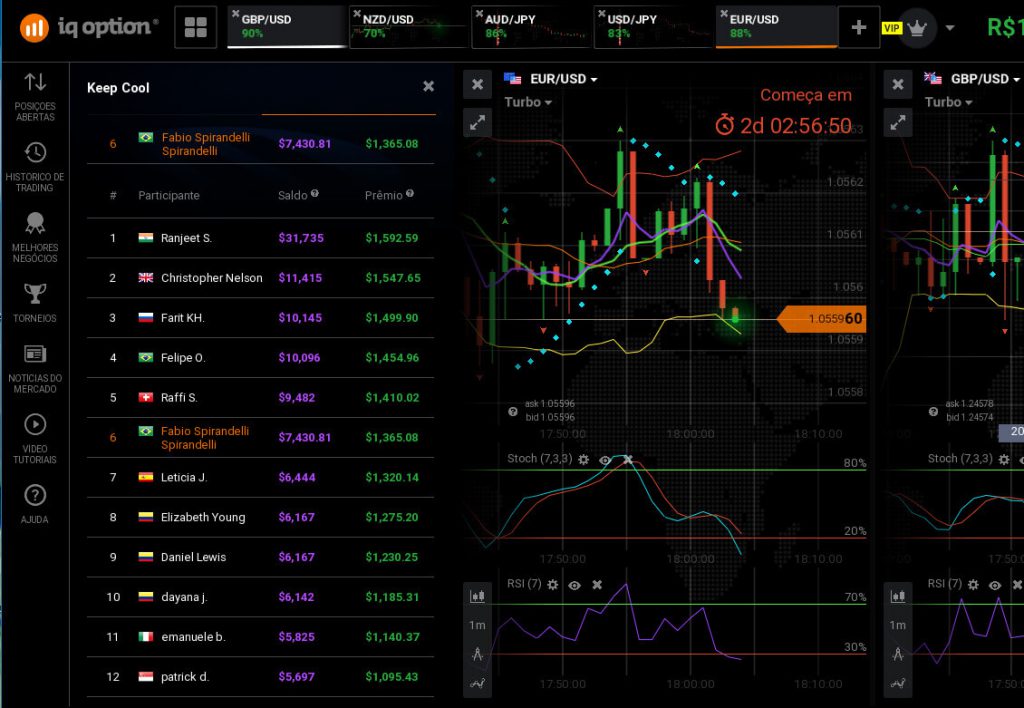 – What strategy do you use in tournaments?

– The small tournaments are the hardest, because I consider them purely a game of luck. In tournaments lasting over 5 to 10 days, you can outline your strategy but you have to be more aggressive in the transactions. In the 15- and 30-day tournaments you can plan a daily goal like with a real account, which is logically a bolder goal. Winning is getting harder and harder, since there are increasingly more traders in the tournaments, and they are getting better and better and mastering how it works.

My initial strategy for shorter tournaments is to first perform a buyback, which doubles your money. We begin trading with 10-20% of the total, because in short tournaments, you have to be more aggressive in order to double or triple the money in the shortest possible time (if you lose your funds, you can still do another buyback and try the strategy again). Once you reach the doubling or tripling target, the transactions become 5-10% of the total, and you make a high volume of trades.

For longer tournaments, such as 15 and 30 days, first do a buyback to double the funds and invest 5%. Trade as if the funds were “real,” so make more trades than normal because the tournament is long, and you can set a daily goal (start with a more demanding goal). When you reach a good score, begin trading with a daily goal with compound interest. In my opinion, the goal is to rank among the winners. Then, moderately, go up one position at a time, without taking a risk.

– Have you ever won a tournament? What was it like?

– I have won in several different tournament modes. Each one has its own specifics, but the key is to be willing to trade a lot, and the goal is to get ranked.

– Do you have any advice you can give to anyone who is just starting?

– I advise everyone to participate.