Holy Week. Is It a Good Time to Trade?

New equity sell-off, changing geopolitical risk in Syria and North Korea, new episodes of tariffs drama and White House drama. All happened in a week that started with a G-20 meeting, a forum where cooperative initiatives are supposed to be taken and coordination is supposed to be achieved.

I do not expect so many events next week, as it is the Holy Week of Catholic Christians.

My last week’s views were not as accurate as older ones.

Last week’s Trade Balance release (-0.20T JPY) was not part of my scenario. Yet the new equity sell-off and episodes of tariff drama favored JPY and will continue to do so. I regard any retest of the 200-Day Moving Average as an opportunity to go short.

I am keeping long positions on USD/CAD at higher level than current week’s close. Even if I am wrong with my reasoning that BOC (the Central Bank) will keep rates unchanged on the 18th of April meeting, I strongly believe that there are enough reasons for the pair to retest the 131.50-131.66

Increasing unemployment at 5.6% gives another good reason for RBA to not consider tightening any time soon. I have straightforwardly expressed my view that AUD/USD pair is in a well-defined downturn and both the actual move of the pair and the macro releases of last week, strengthen this scenario.

Yet, I do not believe that the downtrend will continue during next week. Most possible scenario is for the pair to consolidate between 0.76 and 0.78 levels

I keep my 2018 long bias on USD. What I get from FED’s communication is aggressive rate hiking during the year, which I believe is not priced at current USD levels. I am not yet calling for 4 rate hikes within 2018. I do believe that equity sell-offs (like the one we are witnessing now or had witnessed on February) will keep on happening and would put the brakes on FED’s tightening. What I am implying is that an independent/sober/reasonable/ confident interpretation of Wednesday’s FED’s press conference should categorize it as a hawkish communication*. The only question I noticed that the Governor was not persuasive enough was the question regarding the consequences of a possible trade war.

Markets reaction was opposite to my interpretation. It took 14 hours and Thursday’s European Opening (at 08:00GMT) for the markets to start pushing USD higher, which was unreasonably weakening up until that point. To my defense, the new Governor’s (Jerome Powell) quick rhythm of speaking, and more human nature of voice (compared with Draghi’s or Yellen’s extremely cautious/almost nonhuman usage of words) will create some misunderstanding/confusion/opportunity.

USD strengthening was interrupted by Thursday’s new episode of tariffs drama. “China is not afraid of and will not recoil from trade war” was communicated by the embassy of China in USA, China could impose tariffs on 3B$ worth of US trade mainly hitting US Soybean producers, and USA could impose new tariffs on 50B$ worth of Chinese trade. 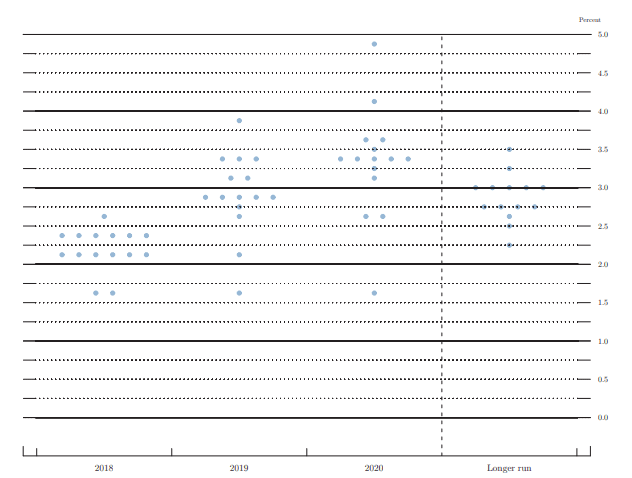 I am keeping my short bias on EUR/USD. Except for the increased Current Account at 37.6B EUR, all readings are within my scenario. Tuesday’s published economic statement (ZEW at 13.4) has plunged, Wednesday’s German’s 10Y bond auction resulted in lower yields (0.60%), FED’s rate increased by 25bps and all Thursday’s PMI readings were deteriorating. Positioning on the divergence of EUR vs USD makes sense, especially during periods of equity sell-offs

Last week’s mentioned and drawn trend line has not been crossed despite the new episodes of tariffs drama. I believe that the trend line will prove to be valid and that current levels are nice to build a short position.

BOE’s degrees of freedom seem to increase. On the one hand we had the announcement of the extension of the Brexit deadline -it was set on Dec 2020, 21 months later than the initial March 2019 deadline-, the inflation CPI index is finally decreasing (2.70% latest reading). On the other hand, unemployment is at record low (4.3%) and average earnings are picking up 2,8%. The picture is getting rosier.

I believe that being long GBP could pay off:

Next article Zcash Prepares to Become the Top Privacy Coin

Economic Calendar for September 1st: USD/CAD Is Expected to Have Increased Volatility

Forex Trends for May 15th: Disappointing US economic data led to volatility on USD

IQ Option·21.12.2017
Close
We use cookies to understand how you use our site and to improve your experience. By clicking "Got it" or by continuing to use our website you agree to their use.
Cookie settingsGot it
Manage consent