Crypto Market: Forked Coins Are Performing Better Than Original Ones

As bear is dominating the charts again, coins are continuously bleeding. Even massive weekly gainers like EOS are not immune to the bearish takeover. In the last 24 hours, the market shed $28 billion, as the current market capitalization is $322 billion.

The coin managed to register 5.5 percent gain over the entire week despite the dip of 7.3 percent in 24 hours. The coin is attracting an average number of traders, as the trading volume in last 24 hours was $335 million. 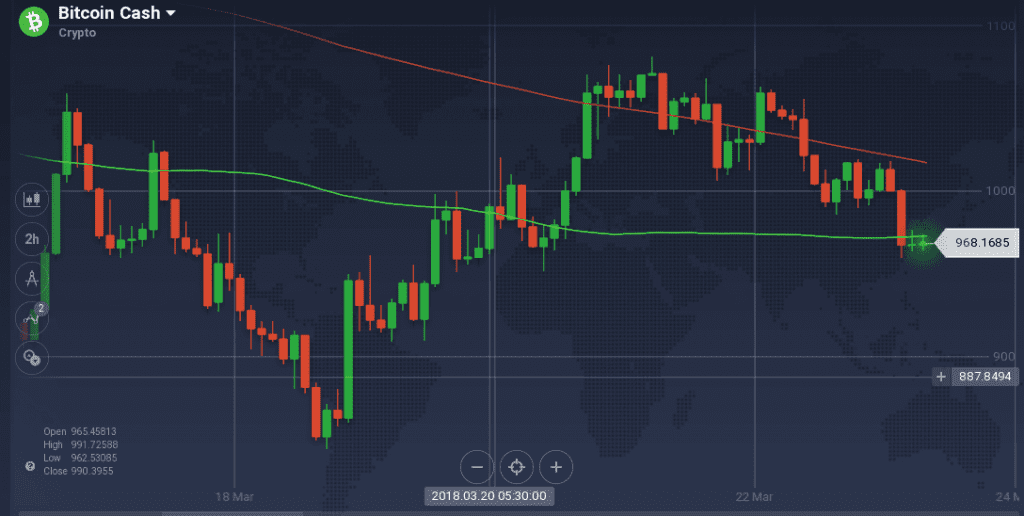 The performance of BCH on the weekly chart was full of ups and downs. After climbing to $1060, the coin took a nose dive and go below $850. However, the coin pivoted with a bullish trend and in around 48 hours, it went above $1075. The peak resistance also played its role and the coin started to lose its value gradually. Though BCH struggled to maintain its peak value, multiple resistance at $1060 and $1020, became major barriers.

The recent dip in the prices resulted in the technical indicators to plummet. Both the oscillators – Stoch and RSI – are running below the overbuying zone. Similarly, other indicators like MACD and ADX are also moving bearish. The current value of RSI is around 28 percent.

The unplanned fork of Ethereum is gaining audience day-by-day. Unlike most of the coins, ETC made a major bullish rally in late February. However, it could not hold its bullish prices and is going down since. In a month, it lost more than 57 percent of its value as it went down from $42 to the current trading price of $18. Considering the recent charts, the coin depreciated 8.7 percent in the last 24 hours, but maintained around 3 percent appreciation in the weekly. Considering ETC’s $1.85 billion market cap, the trading volume of $219 million is not bad as no massive movement is going on with its prices. 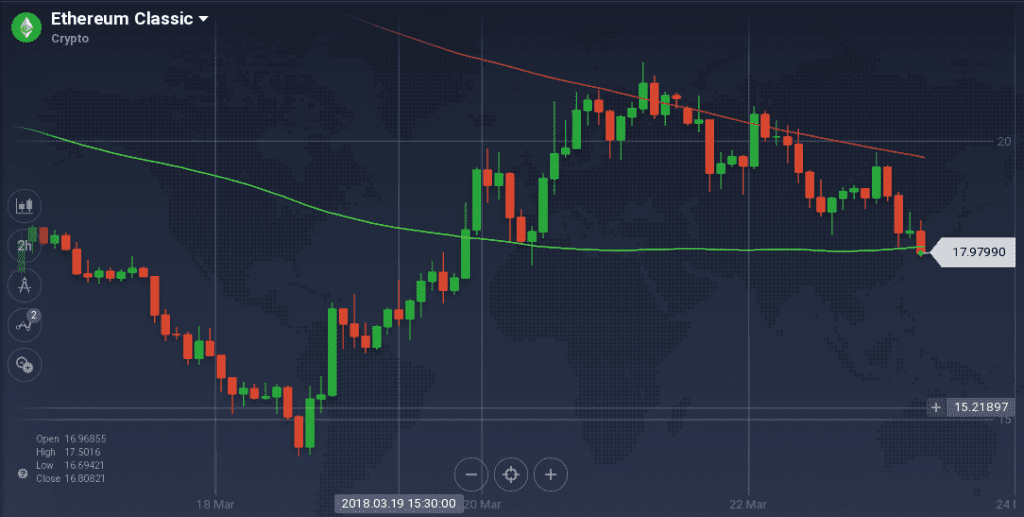 On the weekly chart, a massive bull followed a steep bear for ETC. The bear was the result of this week’s market crash – a dip from $18.5 to $14.3. However, the coin rebounded aggressively as it went above $21 in less than 48 hours. For ETC as well, the peak resistance acted as a massive barrier, which pushed the coin in a gradual bearish ride. Though multiple support formed at $19.4 and $18.7, they could not hold the prices due to the formation of resistance at $20.5 and $19.5.

Currently, the coin is struggling to find some support as it trading around $18.

Due to the extreme dip in the prices, the indicators went bearish. However, due to the coin’s tendency to rebound, some sign of trend reversal can be seen in the indicators. RSI, currently at 42 percent, has an upward inclination as it went up from the overselling zone. Similarly, Stoch is also hinting some positive signs hovering below the overselling mark. However, MACD curves are still running strongly bearish.

Bitcoin took a major hit this afternoon, dropping hundreds of dollars as rumors stated that Binance would face criminal charges for operating without registration in Japan. According to Asian news outlet Nikkei, Japan’s Financial Services Authority (FSA) was in the process of investigating Binance’s activity in the country.

Regulatory pressures and a broadening bank clampdown have seriously affected cryptocurrency exchanges in India. Their representatives claim bitcoin trading has dropped as much as 90 percent in the last two months. Cryptos are not considered legal tender in the country and authorities have demonstrated a negative attitude towards their use. At the same time, leading Indian banks have taken steps to limit exchange operations even before any rules mandating such policies are adopted.

Huawei the world’s third-largest mobile phone maker is reported to be exploring the release of a model that can run blockchain applications according to two anonymous sources reported by Bloomberg News.

Though the prices are dropping, the opportunity of making some profit from the market is still there.

Previous article Forex Analysis: Bank of England on the Path to Policy Tightening

Fabiola Pina·03.03.2018
Close
We use cookies to understand how you use our site and to improve your experience. By clicking "Got it" or by continuing to use our website you agree to their use.
Cookie settingsGot it
Manage consent