Worst place to be for an analyst is behind the curve. Before starting this 20 week’s long  report, I tried hard to avoid being the anecdotal definition of Economist. The one that accurately describes today what has happened yesterday that made the past predictions fail.

Having passed a long period while my predictions were on spot, followed by a period that the market moved further while I was arguing in favor of consolidation, I am experiencing the awful feeling of being behind the curve.

The high bond yields – high tension environment, eventually followed by equities falling and volatility picking up. But this realization is worthless, while just a week ago, I was declaring that I was wrong arguing for equity sell off and volatility increasing.

Inflation seems contained. My main scenario that would trigger equities falling and safe haven assets increasing (USD, JPY) is off the table for the rest of 2018.

Trump’s agenda seems more real that was initially priced. On the positive side of the moon, tax law and fiscal expansion is a reality for the last 6 months. On the dark side of the moon, tariffs that started with too many exemptions and seemed rhetoric, now are real. And the only way to price in tariffs taking effect is by expecting a shrinking GDD. A 1.5% downwards revision of Global GDP from today’s 3.9% number is within the range of possible outcomes.

I keep my short USD/CAD position.

On Friday while everyone was watching for the OPEC’s decision and the realization of EU’s retaliatory response on tariffs, the pair has finally started moving south. Worth-noted that Friday’s unexpectedly low inflation reading announcement could not sent the pair higher. USD/CAD rallied for 10 minutes but eventually moved lower.

Snapshot is getting worse:

Australian economy is moving fast. I am still confident that my long AUD/USD bias will pay off and that 0.7680 level will be reached within summer.

Anything that quantifies household consumption (credit growth, wage growth, private capital expenditure) should be carefully watched. RBA’s governor explicitly argued in favor of growing wages (3% growth would be the magic number) rather than growing debt, to increase inflation.

Last week’s view that further continuation of USD strengthening is unlikely, and levels need to be retested proved correct. I keep my long USD bias but still cannot pick a level or a triggering event that would make me enter the market.

Any reasonable decreased reading of confidence, consumer sentiment, personal spending can now be interpreted as something good for a sustainable growing US economy, as they do not fuel inflation, and not as something that postpones future rate hikes. 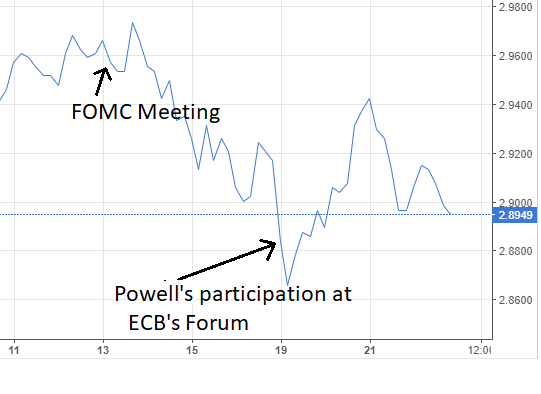 The macroeconomic picture is mixed and described in one word, unchanged. On the one hand, one may note the healthy levels of GDP growth, PMI readings and Draghi’s conviction that inflation expectations are well anchored, but on the other hand all kind of confidence / sentiment readings are alarmingly decreasing.

Last week I was pointing to my short EUR/USD bias. I keep the same view and could enter when 1.1750 is retested.

Worth-noted the low liquidity expected on CAC contracts on Tuesday and the DAX contracts on Wednesday as France and Germany are playing at FIFA World Cup. Range trading is what generally happens under such circumstances.

Bank of England left an optimistic flair for UK’s economy, restated that it expects an excess demand growth by 2020 that would fuel inflation and restated the bad weather narrative regarding 1Q18. Worth noted that there are now 3 members of BOE voting for rate hike instead of 2, of previous meetings.

Today’s EUR Weakness Is an Opportunity for You

Types of Crossovers, Classifying Your Entry

IQ Option·06.07.2018
Close
We use cookies to understand how you use our site and to improve your experience. By clicking "Got it" or by continuing to use our website you agree to their use.
Cookie settingsGot it
Manage consent