The last trading session of February 2018 in the forex market today has a very rich economic calendar mainly in the European and American sessions. Moderate to high volatility is expected for the EUR/USD currency pair as there is important economic data such as the Unemployment Rate in Germany and the CPI for the Eurozone, and later the US GDP Growth Rate.

Also, there is another important factor which can move the US Dollar, the new Fed Chair Jerome Powell delivering his semi-annual economic testimony before House and Senate committees Tuesday and Thursday, making his first appearance as Chairman of the Fed. The forex market will focus on his comments related to inflation, economic growth and future path of interest rates.

These are the main economic events for today in the forex market:

The Euro and the British Pound can move due to the Consumer Confidence Index in Germany and the UK, as higher than expected readings will be supportive and positive for both currencies, the reason being that higher consumer confidence can lead to higher consumer spending and economic growth. The forecasts are for lower readings for both Consumer Confidence Indexes, but the declines are expected to be marginal. The Swiss Franc can move due to the KOF Leading Indicators about the state of the economy, a higher reading should be positive for the Swiss Franc as the Index predicts the direction of the economy over the following six months.

A decline is expected with a reading of 106.1, lower than the previous reading of 106.9. The British Pound can move also due to the release of the Nationwide Housing Prices, reflecting the state of the housing market and also inflationary pressures in the economy as well. Higher readings are positive for the British Pound reflecting a strong housing market. The forecast is for a decline and a reading of 2.6%, lower than the previous reading of 3.2% on a yearly basis. Higher than expected or rising figures for the GDP Growth Rate in France and Sweden will be considered positive for the Euro and the Swedish Krona indicating increased economic activity and robust economies. On a quarterly basis the forecasts are for increases of both mentioned GDP Growth Rates.

Two very important economic events can add significant volatility and price action for the Euro. A lower than expected or declining Unemployment Rate in Germany and higher than expected or rising Inflation Rate in the Eurozone will be positive for the Euro, indicating inflationary pressures and a robust economy. As seen from the chart the Unemployment Rate in Germany is in a downtrend, being a positive fundamental factor for the German economy. 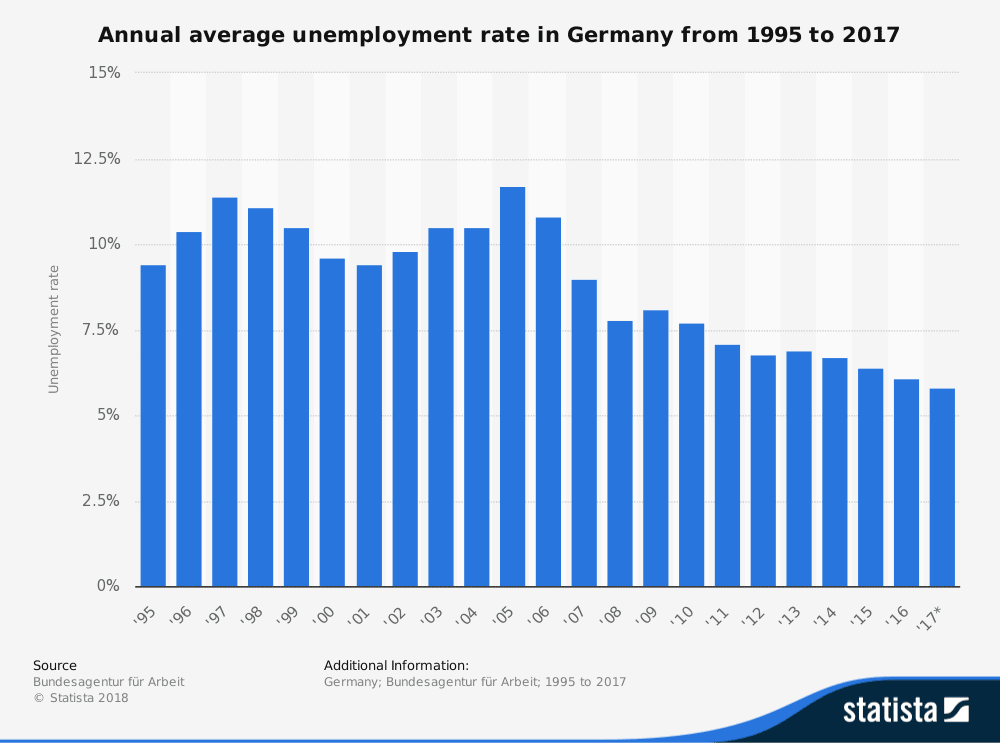 This statistic shows the annual average unemployment rate in Germany from 1995 to 2017. As of 2017*, the annual average unemployment rate in Germany was at 5.8 percent. The forecasts are for an unchanged Unemployment Rate of 5.4% in Germany and a marginal decline for the Inflation Rate in the Eurozone with a reading of 1.2%, lower than the previous reading of 1.3%. The Inflation Rate is expected to decline also in Italy both on a monthly and a yearly basis.

As seen from the chart for the US GDP Growth Rate, the US economy expanded an annualized 2.6 percent on quarter in the last quarter of 2017, below 3.2 percent in the previous period. There are significant increases and declines for the GDP Growth Rate, mainly due to seasonality factors.

Higher readings are positive for the US Dollar indicating economic and business expansion. Pending Home Sales are expected to decline on a yearly and monthly basis, which should be considered a negative factor for the US Dollar. Increased Pending Home Sales indicate a strong housing market, which is correlated to the overall state of the economy. Any positive or negative economic surprises for the Crude Oil Stocks Change can move the oil prices and the USD/CAD currency pair.

Higher readings for AIG Manufacturing Index are positive for the Australian Dollar, indicating improved economic and business conditions for the manufacturing activity. The forecast is for a decline and a reading of 57.0, lower than the previous reading of 58.7. Also increased readings for the Private Sector Credit are positive for the Australian Dollar reflecting increased consumer spending and expenditures on housing, personal and business purposes.

These expenditures can have a positive impact on the GDP Growth Rate. The forecast is for a marginal increase with a figure of 0.4% on a monthly basis, higher than the previous figure of 0.3%.

Previous article Forex World Weekly Report: EUR/USD Managed to Come All the Way Up to 1.2500

First Week Outlook 2018? A Test Is Coming for the Dollar

IQ Option·24.09.2018
Close
We use cookies to understand how you use our site and to improve your experience. By clicking "Got it" or by continuing to use our website you agree to their use.
Cookie settingsGot it
Manage consent