The economic calendar for today has the main economic event of the Reserve Bank of Australia monetary policy decision, the Inflation Rate in Switzerland and Russia, the Construction PMI in Germany, the Ivey PMI in Canada, and the Economic Optimism Index in US. There are not any major economic data related to the Asian Session. Increased volatility and price action is probably expected for the Australian Dollar and the AUD/USD currency pair.

These are the main economic events for today to focus on as they can move the forex market: 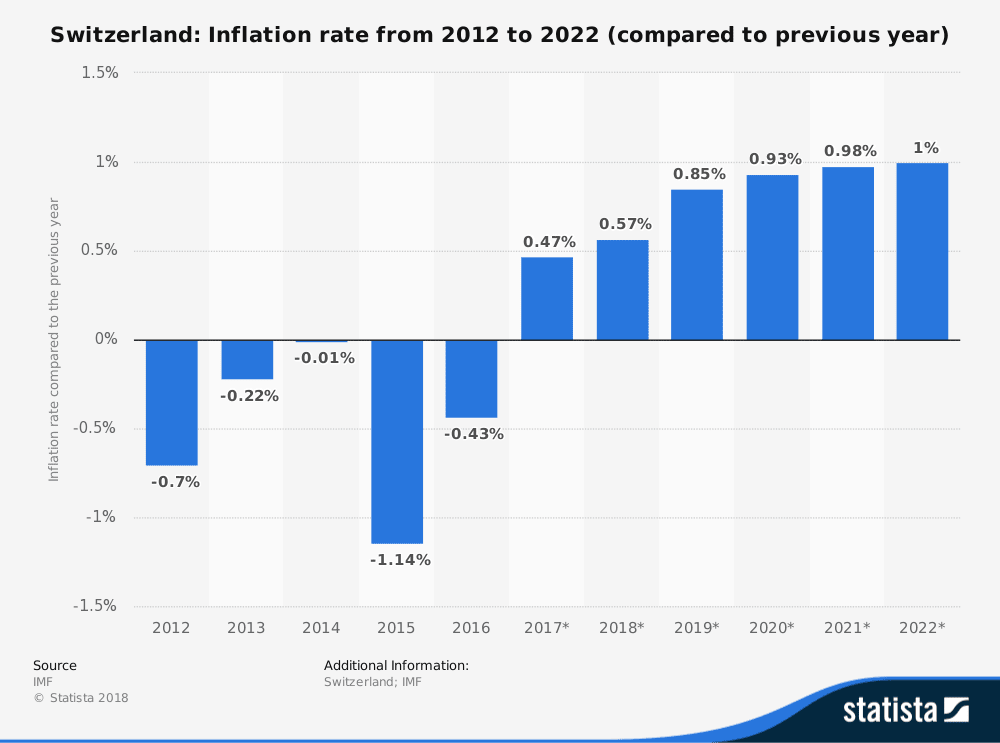 The statistic shows the average inflation rate in Switzerland from 2012 to 2016, with projections up until 2022. The inflation rate is calculated using the price increase of a defined product basket. This product basket contains products and services, on which the average consumer spends money throughout the year. They include expenses for groceries, clothes, rent, power, telecommunications, recreational activities and raw materials (e.g. gas, oil), as well as federal fees and taxes. In 2016, the average inflation rate in Switzerland was approximately -0.43 percent compared to the previous year.

For now there are not any severe inflationary pressures in Switzerland, something which would be positive in economic theory for the Swiss Franc, as they would weigh on the Swiss National Bank to increase the key interest rate to fight inflation. The Inflation Rate in Russia is expected to increase at a marginal rate and reach 2.3% on a yearly basis, higher than the previous reading of 2.2%. This should be positive for the Russian Ruble, as in the case of Swiss economy any sustainable inflationary pressures may signal a more aggressive monetary policy from the Central Bank of Russia to fight inflation.

The Economic Optimism Index (IBD/TIPP) measures the sentiment of consumers related to economic conditions, with readings above 50 indicating optimism, and potential higher economic growth for the economy in the US. The forecast is for an increase of the Index with a reading of 58.2, higher than the previous reading of 56.8 which should be supportive for the US Dollar. The Factory Orders provide an overview of the manufacturing sector, and increased readings are considered positive for the US Dollar indicating increased economic and business activity. The forecast is for a decline of the US Factory Orders and a reading of -1.3%, lower than the previous reading of 1.7%.

The Ivey PMI Index measures the activity level of purchasing managers in Canada, with readings above 50 indicating expansion, being positive for the Canadian Dollar. The forecast is for a reading of 56.3, higher than the previous reading of 55.2. The API Crude Oil Stock Change report provides insights on the demand of the US petroleum industry. Positive or negative economic surprises can move the crude oil prices. For example if the increase in crude inventories is more than expected, this implies a weaker demand and is considered negative for crude oil prices. The central bank official’s speeches can move the currencies with any potential updated information on economic conditions such as inflation rate or economic growth.

Higher than expected or rising Retail Sales, plus a trade surplus for the Current Account will be considered positive for the Australian Dollar, reflecting increased consumer spending, higher future economic growth and capital inflows to the economy. The forecasts are for an increase of the Current Account deficit and increased Retail Sales on a monthly basis, with a figure of 0.4%, higher than the previous figure of -0.5%. As seen from the chart the key interest rate Australia is at a record low of 1.5%, having declined in the previous years, and is expected to remain unchanged at 1.5%.

Any positive surprise with an interest rate increase should be positive and supportive for the Australian Dollar. Higher interest rates attract capital inflows, and the increased demand for the currency should increase its value over time compared with other currencies. However a balance is required from the central bank so as to increase the key interest rate at a level which cannot harm the economic growth, due to the higher cost of capital for consumers and businesses.

What Weak Inflation Gains Mean for the US Dollar