The European Session today has several key economic events, such as the Switzerland SECO Economic Forecasts and the Balance of Trade, the Inflation Rate in UK and the ZEW Survey Figures for Germany and the Eurozone, while very important is the Consumer Confidence Reading for the Eurozone as well. There is also the second day of the G20 Finance Ministers, Central Bank Governors Meeting in Buenos Aires, Argentina. In the American and Asian Session there are not any key events, so expected volatility and price action should be moderate to high only in the European Session, especially for the Swiss Franc, the Euro and the British Pound.

The Federal Government’s Expert Group publishes on a quarterly basis its forecasts for Switzerland’s economic development based on assumptions about the international economy and on monetary developments. A comprehensive assessment of the economic situation in Switzerland and abroad as well as information on the economic forecast of the expert group can be found in SECO’s quarterly publication.

Higher than expected or rising figures for the Balance of Trade Surplus is positive and supportive for the Swiss Franc, and can lead to the appreciation of the currency due to the capital inflows and the increased demand for goods and services denominated in Swiss Francs. The forecast is for an increase of the Trade of Balance surplus for Switzerland. The Germany PPI Index is expected to decline on a monthly basis, indicating low inflationary pressures in Germany. The key economic event early in the morning is the Inflation Rate in UK. The forecast is for a decline of the Inflation Rate and the Core Inflation Rate on a yearly basis. 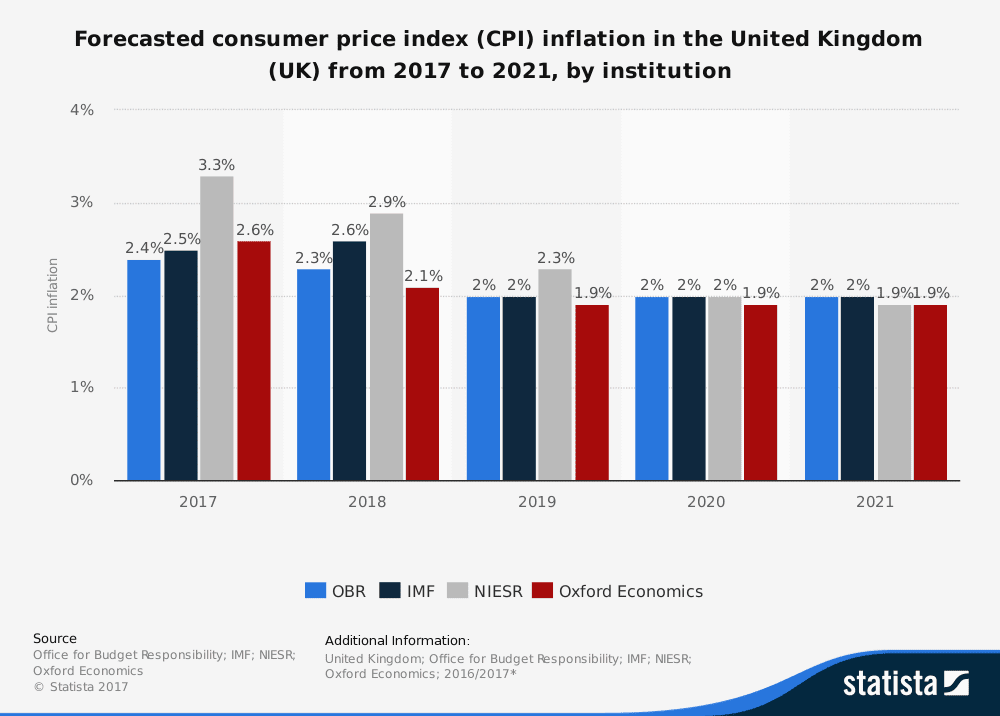 As seen from the chart in the following years the estimates are for the CPI in UK to decline and stabilize around the level of 2%. This statistic shows a comparison of consumer price index (CPI) inflation forecasts in the United Kingdom (UK) from 2017 to 2021. CPI measures the rate of change to market basket price levels of consumer goods and services purchased by households. Predictions varied between the four institutions, with the greatest discrepancy range coming in 2017, yet each institution predicted an overall decrease in CPI inflation. With a softer than expected CPI Index the Bank of England may not raise the key interest rate often, which may influence negatively the British Pound over time.

The Center for European Economic Research (ZEW) releases its surveys and results, indicating the expectations and optimism about the economy of Germany and the Eurozone. Higher than expected or rising figures are positive and supportive for the Euro, reflecting a more optimistic economic sentiment, and improved current and future economic conditions. The forecasts are for declines for the figures of ZEW Current Conditions in Germany and ZEW Economic Sentiment Index in Germany and in the Eurozone, which may influence negatively the Euro. There is a lot of volatility for the ZEW Economic Sentiment index related to the Euro Area.

A report on the US total petroleum industry, with positive or negative economic surprises having the potential to move the oil prices. For example if the increase in crude inventories is more than expected, it implies a weaker demand and is considered negative for crude oil prices.

The housing price indexes measure inflationary pressures, with rising figures being positive for the Australian Dollar, reflecting a robust housing market. The forecast on a quarterly basis is for an increase, with a figure of 0.6%, higher than the previous figure of -0.2%.

EUR/USD: All Wound Up ahead of ECB Meeting

This Is How You Can Make Opportunity Happen

Good News for the United States and Its Economy