The liquidity in the forex market will return today after the public holiday yesterday for the US, China and some European countries, with some important economic data related to the economies of Germany, Eurozone, Switzerland, Spain and UK. Moderate to high volatility and price action should be expected for the Euro, as there will be released the ZEW Economic Sentiment Index for Germany and the Eurozone, and also the Eurozone Consumer Confidence Flash.

Producer prices In Germany measure the inflationary pressures in the economy from the perspective of the domestic producers and the average changes in prices for their output. Rising prices indicate inflationary pressures, and are positive for the Euro as higher inflation rates can lead to future interest rate increases by the ECB. The Balance of Trade for Switzerland is expected to show a slight decrease in the trade surplus with a figure of CHF 2.6 Billion, lower than the previous figure of CHF 2.632 Billion. This is positive and supportive for the Swiss Franc as a trade surplus reflects capital inflows in the Swiss economy and higher exports than imports, therefore increased demand for goods and services denominated in Swiss Francs, which in economic theory should lead to the appreciation of Swiss Franc against other currencies over time.

On the contrary the Balance of Trade for Spain is expected to show an increase of the trade deficit with a figure of EUR -2.1 Billion, higher than the previous figure of EUR – 1.62 Billion. This should be considered a negative factor for the Euro, but later on today there are more important economic data which can really move the Euro. The inflation rate in Sweden on a monthly basis is expected to decline and being negative with a reading of -0.5%, lower than the previous reading of 0.4%, a negative effect for the Swedish Krona, as it reflects the absence of any significant inflationary pressures in the economy. The Sveriges Riksbank, which is the central bank in Sweden has the objective to maintain price stability in the economy with a low, stable rate of inflation.

However the Riksbank uses the CPIF, the consumer price index with a fixed interest rate, as target variable for monetary policy. The target is that the annual change in the CPIF shall be 2 per cent, which is to say the same level previously applied to the consumer price index, CPI. The forecast is for a reading of 2.0%, same as the target level, higher than the previous reading of 1.9%. This increase may be supportive for the Swedish Krona, as sustainable readings over the 2.0% target level will increase the probabilities of future interest rate increase by the Riksbank in 2018.

The Center for European Economic Research (ZEW), releases its monthly survey on future economic expectations for Germany and the Eurozone. Rising or higher than expected figures indicate positive expectations and are positive for the Euro. The forecasts are for higher readings for both Germany and the Eurozone which should be supportive for the Euro. As seen from the graph the ZEW Economic Sentiment in Germany is rising during the past five months, with the exception of a decline during December 2017.

The UK Industrial Trends Orders measures the economic and business expectations of the manufacturing sector, with rising figures being positive and supportive for the British Pound, reflecting an optimistic outlook. The forecast is for a decline with a reading of 11.0, lower than the previous reading of 14.0. 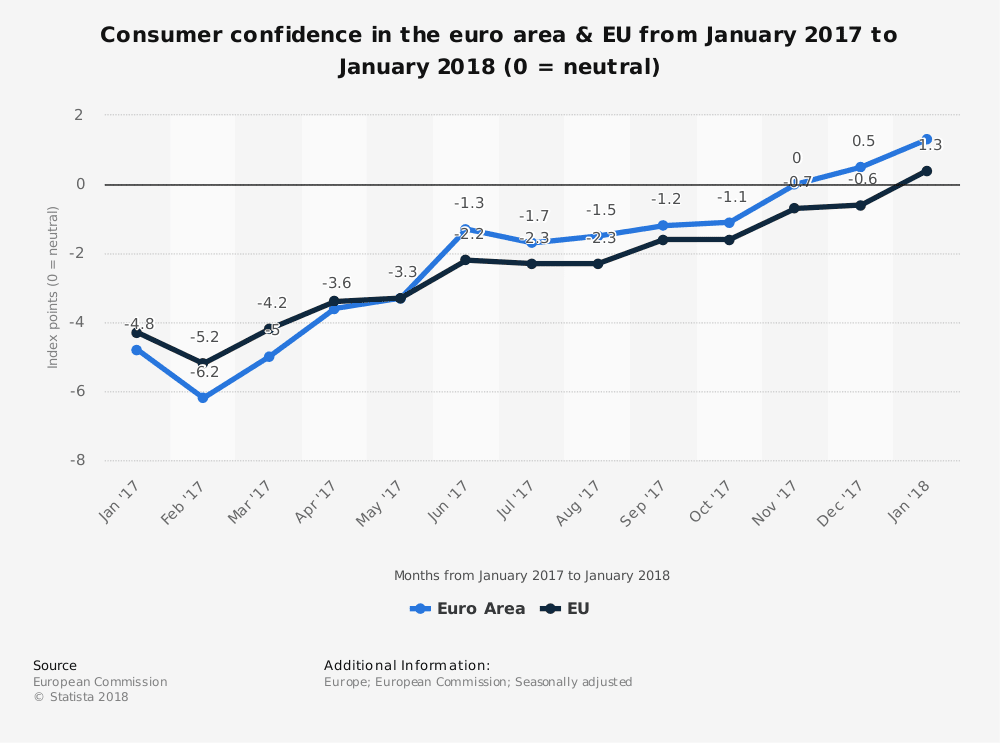 The forecast is for a decline with a reading of 0.9, lower than the previous reading of 1.3. This may influence negatively the Euro upon its financial release.

The Westpac Leading Index tracks the economic activity in Australia and can provide an indication of its future economic performance, with higher than expected or rising figures being positive for the Australian Dollar. The meeting minutes from the Reserve Bank of Australia can also influence the Australian Dollar with any statement on economic conditions such as inflation rate and economic growth, or mentioning a potential monetary policy shift with a tighter monetary policy and interest rate increases in the future.

Inflation Is Why The Dollar Will Rise More

Vasiliy Chernukha·28.11.2019
Close
We use cookies to understand how you use our site and to improve your experience. By clicking "Got it" or by continuing to use our website you agree to their use.
Cookie settingsGot it
Manage consent