The main economic event for today is the US Inflation Rate and Core Inflation Rate, which could support the US Dollar after the strong US data on Non-farm Payrolls. There is also important economic data related to the economies of Australia, Japan, Spain and UK. Moderate to high volatility is expected mainly for the US Dollar, the Australian Dollar, the Japanese Yen and the British Pound.

These are the main economic events for today to focus on as they have the potential to move the forex market:

The Inflation Rate in Spain is expected to rise having a final figure of 1.1%, higher than the previous figure of 0.6%. This will be positive for the Euro, as the inflationary pressures in Spain will contribute positively to the overall Inflation Rate in the Eurozone, and weigh on the ECB decision to raise the key interest rate in the future to fight inflation. Still there are not any severe inflationary pressures in the Eurozone.

The UK Spring Budget 2018 may influence the British Pound as there will be released the findings and forecasts of the Office for Budget Responsibility (OBR) and the latest  economic and public finance forecasts, an update on the economy. It will be important to notice any indication about future spending.

After the recent statements from the Chair of the Federal Reserve Jerome Powell and his optimistic upbeat on the US Economy, the forex market participants will focus on the figures of the US Inflation Rate and the Core Inflation Rate, as higher than expected or rising figures will probably indicate an interest rate increase during the next FOMC meeting scheduled for March 20-21st 2018.

The forecasts are for unchanged readings of the Inflation Rate and the Core Inflation Rate at 2.1% and 1.8% respectively, but for a decline of the monthly Inflation Rate with a figure of 0.3%, less than the previous reading of 0.5%. As seen from the graph, the CPI in the US is expected to rise gradually from 2018 up to 2022, indicating inflationary pressures which can support future interest rate increases by the Fed. 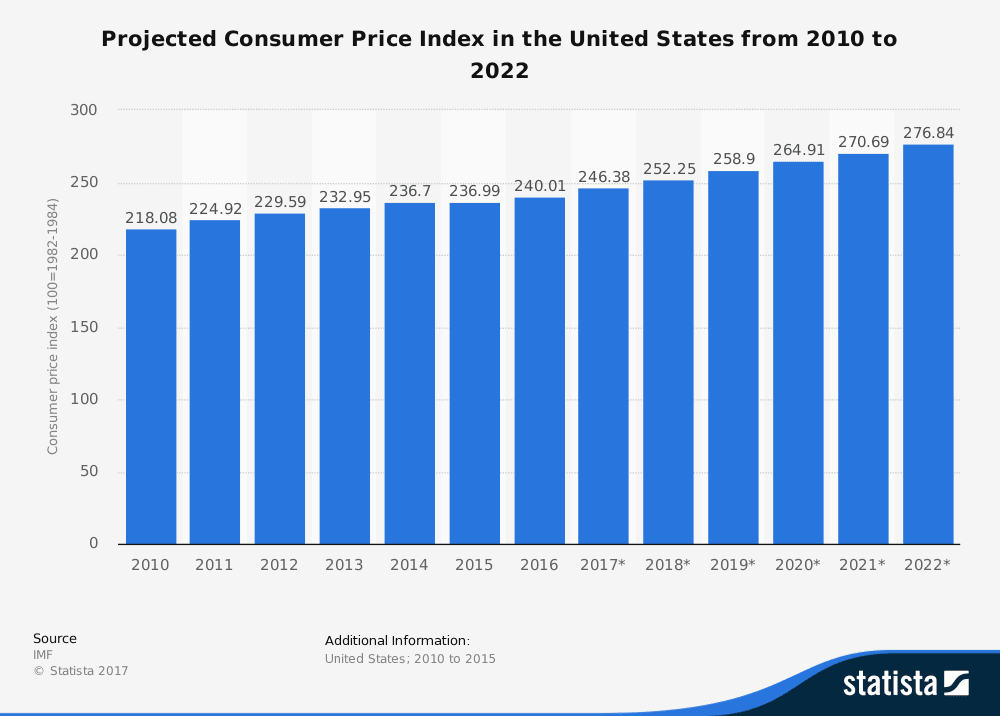 The US CPI measures change in the price of consumer goods and services purchased by households and a key value in calculating US inflation and the health of the economy. The US Department of Labor’s Bureau of Labor Statistics calculates the CPI and defines it as, “a measure of the average change over time in the prices paid by urban consumers for a market basket of consumer goods and services.”

They aggregate the data collected to compare how much it would cost a consumer to buy the same market basket of goods and services one month or year against how much it cost in a previous month or year.

The API Crude Oil Stock Change provides insights on the US petroleum demand. If the increase in crude inventories is more than expected, it implies a weaker than expected demand and is considered negative for crude oil prices.

Higher than expected figures for Business and Consumer Confidence, but also for Home Loans will be supportive and positive for the Australian Dollar. Increased readings of Business and Consumer Confidence have a positive impact on employment, spending, and GDP Growth Rate, supporting a more optimistic economic outlook. As seen from the chart, the trend for the Business Confidence is undefined with increases and declines, but for the past 2 consecutive months there has been an increase.

The Monetary Policy Meeting Minutes can influence the Japanese Yen in the event new updated information on economic outlook, inflation is released, which may indicate any monetary policy shift and change in the near future. The Machinery Orders are an important indicator of business capital spending, and increases are indicative of stronger business confidence and economic outlook as well, while they can also have a positive impact on employment. The forecast is for a figure of 6.5% and an increase for the Machinery Orders, much higher than the previous reading of -11.9%, which should provide support for the Japanese Yen.

IQ Option·26.02.2018
Close
We use cookies to understand how you use our site and to improve your experience. By clicking "Got it" or by continuing to use our website you agree to their use.
Cookie settingsGot it
Manage consent