A very rich economic calendar today, with major economic data related to the economies of Australia, UK, Switzerland, Germany, Eurozone, US and Japan, which means that expected volatility and price action for the major currencies should be moderate to high. The positive or negative economic surprises if any, may add further volatility to the forex market and potentially form new trends. For example the forex market will weigh on the Fed and BoE Interest Rate Decisions, their prospects of future changes so as to probably form a new trend, either an appreciation of the USD or the British Pound for the GBP/USD currency pair.

These are the main economic events for today which can move the forex market:

The Annual SNB Report and ECB Economic Bulletin will provide insights on current economic conditions in Switzerland and in the Eurozone, while higher than expected or rising figures for the Markit PMIs will be positive and supportive for the Euro, reflecting expansion and increased economic activity in the various sectors.

The Business Climate Index, Expectations Index and Current Conditions Index are published monthly by the IFO institute, measuring business expectations and economic conditions for the next six months. Higher than expected or increasing figures are considered positive for the Euro, indicating increased optimism on the economic and business outlook. The forecasts are for declines for all Ifo Indexes, which may have a negative influence on the Euro. Also lower figures are expected for all the Markit PMIs Indexes for the Eurozone, indicating expansion but at a slower pace compared to the previous readings, which may influence also negatively the Euro. The Markit Composite PMI Flash figure for the Eurozone is expected at the level of 56.7, lower than the previous figure of 57.1.

After the important economic data yesterday on the Unemployment Rate and Employment Change in the UK, today the Retail Sales and the BoE Interest Rate Decision can move the British Pound significantly. A higher than expected Retail Sales figure will be positive for the British Pound, reflecting increased consumer spending and higher future economic growth. The forecast is for a figure of 1.3%, less than the previous figure of 1.6%. The BoE is expected to leave unchanged the key interest rate at 0.5%. But the statements made by the BoE indicating potential future interest rate increases may influence more the currency than the actual announcement of the Interest Rate Decision. As seen from the chart, the forecasted Bank Rate in the UK is expected to increase gradually over time in the following years. 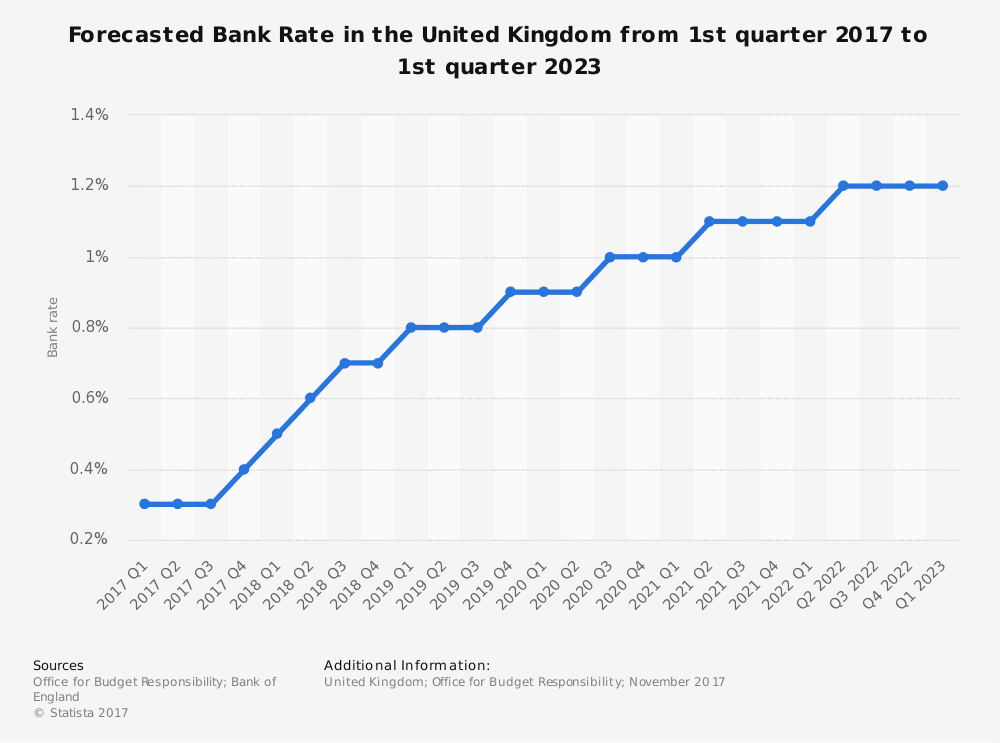 This statistic shows the forecasted Bank Rate in the United Kingdom (UK) from first quarter 2017 to first quarter 2023. The rate at which the Bank of England can loan money to commercial banks is set to increase gradually over this period, a net increase of 0.9 percentage points. This Bank Rate has a close correlation with the key Interest Rate, so over time the key Interest Rate is expected to increase as well.

The same financial analysis applies for the US economy as in the case of the Eurozone. Higher than expected or rising figures for the Markit PMIs Indexes will be positive for the local economy, and the US Dollar. The forecasts are for marginal declines for all PMIs Indexes, which although negative, may have a little impact on the US Dollar.

As seen from the chart the Unemployment Rate in Australia is in a range of 5.4%-5.8%, for the past twelve months. The forecast is for a figure of 5.5%, same as per previous figure, a neutral reading. Lower Unemployment Rate is positive for the economy, leading to higher consumer spending and higher economic growth.

The Pound Is on the Rise Ahead of British CPI Data

IQ Option·30.10.2017
Close
We use cookies to understand how you use our site and to improve your experience. By clicking "Got it" or by continuing to use our website you agree to their use.
Cookie settingsGot it
Manage consent