The recent statements from the newly appointed Fed Chairman Jerome Powell, moved the forex market and helped the US Dollar appreciate against major currencies as the market is now starting to anticipate 4 interest rate increased by the Fed in 2018. This is a very important fundamental factor which can form a new trend for the US Dollar in 2018. Today the US Dollar can move with the release of economic data such as the PCE Core and the ISM Manufacturing and Employment figures. Other currencies which can move upon the release of important economic data are the Euro, the Swiss Franc, Japanese Yen, the Australian Dollar and the Canadian Dollar and the British Pound.

These are the main economic events for today to focus on:

A plethora of important economic data early in the European Session, with a focus on PMI figures which measure the level of economic activity in the Manufacturing sector. Higher readings are positive and supportive for the local currencies, the Euro, The Russian Ruble and the Swiss Franc as they indicate expansion in the sector.

A lower than expected Unemployment Rate for Italy is considered positive for the Euro, indicating a strong labor market, while higher figures for the GDP Growth Rate and Retail Sales in Switzerland will be positive for the Swiss Franc indicating a robust economy and increased consumer spending, which is correlated with economic growth. The forecasts are for a higher figure of GDP Growth in Switzerland on a yearly basis at 1.8%, higher than the previous rate of 1.2%, while the Retail Sales are also expected to increase on a yearly basis with a figure of 1.1%, higher than the previous figure of 0.6%.

Again as mentioned before a higher than expected reading for the Manufacturing PMI in UK will be positive and supportive for the British Pound, signaling an expansion in the sector. The forecast is for a marginal decline and a reading of 55.0, lower than the previous reading of 55.3.

A higher reading for the Mortgage Approvals and the Consumer Credit will also be considered positive for the British Pound indicating a strong housing market, a leading indicator of the broader economy and increased consumer spending on goods and services, with the potential to have a positive impact on the GDP Growth Rate. Consumer spending is one of the ways to measure the GDP level. Mortgage Approvals are expected to increase, while Consumer Credit to decline.

Probably the most important economic event in the European Session with the potential to move the Euro positively should there is a decline in the actual reading. The forecast is indeed for a marginal decline and a reading of 8.6%, lower than the previous reading of 8.7% Lower Unemployment Rate means practically a higher number of people employed and being able to increase the total level of consumer spending, while adding inflationary pressures in the economy due to stronger demand for goods and services. As seen from the chart the Unemployment Rate in the Eurozone is in a downtrend, a fundamental factor which explains in a large extent the appreciation of the Euro against other currencies such as the US Dollar in 2017. 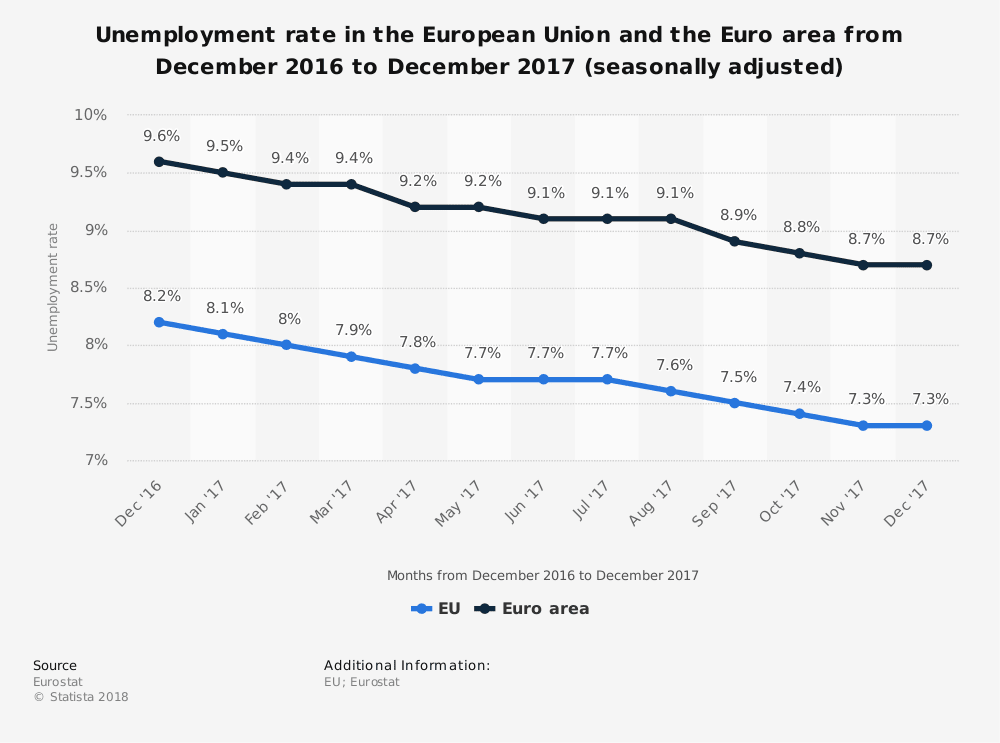 The Current Account for any country is the total of the trade balance, net income and direct payments between it and other countries and in essence measures the capital flows to and from the country. As the balance of trade is incorporated in the Current Account, a trade surplus is considered positive for the local currency, the Canadian Dollar, indicating capital flows to Canada and increased demand for the Canadian Dollar.

The forecast is for a Current Account reading of -17.9 Billion Canadian Dollars, which is less than the previous reading of -19.4 Billion Canadian Dollars. Higher readings for the US PCE Price Index, Personal Income and Spending, plus the PMI figures will be considered positive and supportive for the US Dollar. Increased Income and Spending indicate higher consumer spending in the future, a higher PCE Price Index indicates inflationary pressures, while increased readings for the PMI Index signal expanding conditions and economic activity. As seen from the chart below taken from tradingeconomics.com the ISM Manufacturing PMI in the US has been in an uptrend in general as of April 2017.

The Fed Powell Testimony can add increased volatility for the US Dollar based on statements related to economic growth, inflation and interest rates path.

Increased Private Capital Spending is positive for the local economy reflecting optimism in the economy. The forecast is for an increase of the reading.

These Are the Events You Need to Watch This Week