The last trading session for this week has important economic data related to the Euro, with the release of the Inflation Rate in Italy and in the Eurozone, and several economic releases related to the US economy. Moderate to high volatility is expected for the Euro and the US Dollar, and most probably the EUR/USD currency pair.

These are the main economic events for today to focus on today in the forex market:

The ECB has mentioned that interest rate increases for 2018 are most probably not an option, so this actually means that the ECB will have not pressure to increase the key interest rate any time soon, which could be considered negative for the Euro. The key driver for the Euro may be the economic growth in the Eurozone. As seen from the chart, the Inflation Rate is expected to increase gradually and reach the level of 1.97% in 2018. 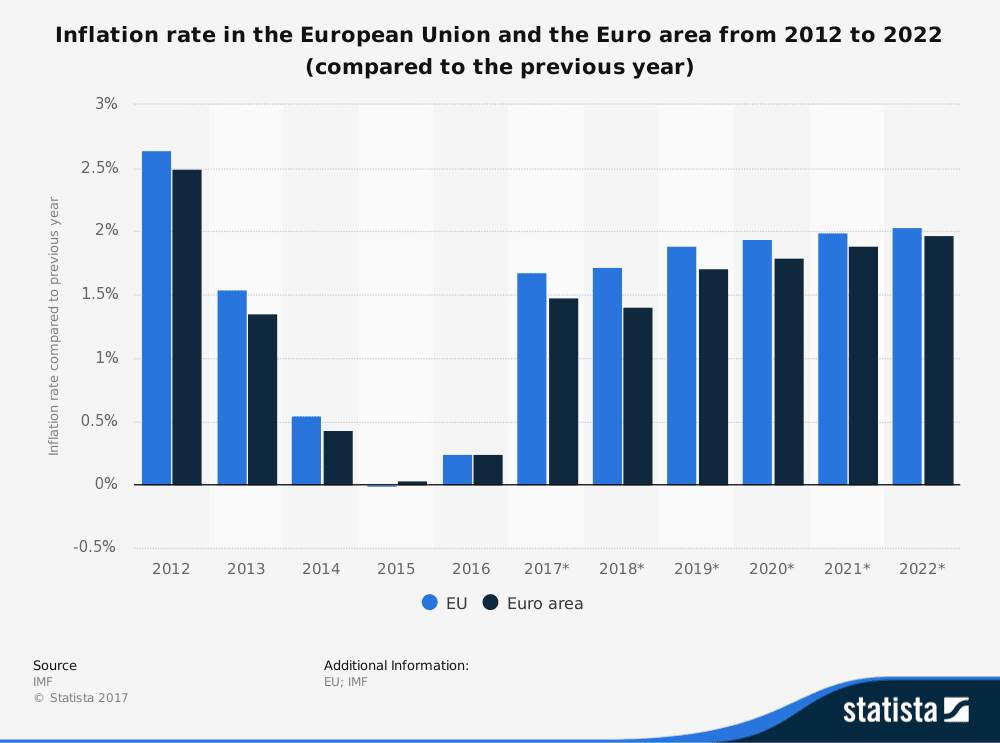 The statistic shows the inflation rate in the European Union and the Euro area from 2012 to 2016, with projections up until 2022. The term inflation, also known as currency devaluation (drop in the value of money), is characterized by a steady rise in prices for finished products (consumer goods, capital goods). The consumer price index tracks price trends of private consumption expenditure, and shows an increase in the index’s current level of inflation. In 2016, the inflation rate in the EU was about 0.24 percent compared to the previous year.

A strong housing market is correlated with a strong economy, so increased readings of Housing Starts and Building Permits are supportive for a strong housing market. The forecasts are for declines for both of the expected figures, but at the same time the Industrial Production is expected to increase both on a monthly and a yearly basis. A mixed economic data for the US Dollar.

Higher Job Openings will also be supportive and positive for the US Dollar, reflecting a robust labor market, which can lower the Unemployment Rate and contribute positively to economic growth. The forecast if for a figure of 5.8 Million, a marginal decline with the previous reading of 5.811 Million.

One of the Weakest Recoveries in US Economic History: The Reasons

The Pound Is on the Rise Ahead of British CPI Data

IQ Option·13.06.2018
Close
We use cookies to understand how you use our site and to improve your experience. By clicking "Got it" or by continuing to use our website you agree to their use.
Cookie settingsGot it
Manage consent