Dollar gives up gains against the Euro following the FOMC’s surprisingly hawkish statement, but it remains strong against other currency pairs.

The Federal Reserve surprised many market participants by acknowledging recent weakness in data but dismissing it as “transitory”. They have decided that the softness in inflation, growth, and other economic stats is not going to dissuade them from raising interest rates in June. Odds for a June rate hike rose above 95%. 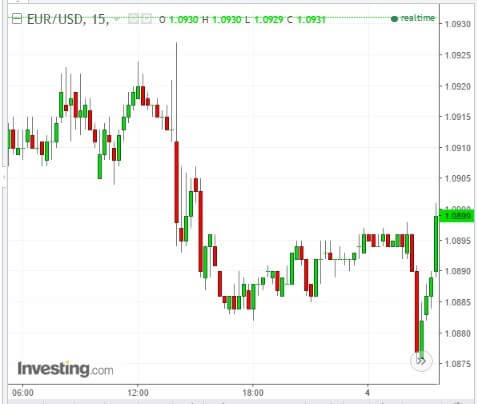 Losses following the FOMC were given back following Emmanuel Macron’s clear victory against Marine Le Pen in France’s presidential debate and impressive European data. Most polls show Macron ahead by a comfortable margin, and his debate performance makes his victory on Sunday even more likely.

Le Pen has come out hard against the Euro and vowed to take France out of the European Union if she is elected. On the other hand, Macron is committed to the European project. As the odds of Macron’s victory increase, the Euro has been rising in anticipation.

More positive news came as retail sales and PMI beat to expectations. This continues a trend of impressive economic data coming from the Eurozone. This is a stunning change from the previous few years when the European economy was on the verge of depression and deflation.

In Europe, the hard data is confirming the stock market’s strength. In contrast, hard data has yet to confirm lofty valuations in the US stock market and bullish sentiment. Thus, the Euro is gaining against the dollar.

Market participants have already priced in the impact of a June rate hike and will turn its focus to upcoming economic data to determine whether the Fed is correct in labeling recent weakness as temporary and transitory.

Although, there have been famous instances of the Fed getting it wrong. Recent history shows that the Fed has shown good judgement in steering monetary policy against headwinds.

In late 2014 and early 2015, many market participants were advocating for looser monetary policy due to weakness in oil prices, industrial production turning negative, and inflation readings running below expectations. The Fed disagreed with consensus and remained steady to its plan of tightening policy via tapering quantitative easing (QE). The Fed was correct. Growth and inflation bounced back when the decline in oil subsided.

Next article US Dollar and Euro Rally: Forex Trends for Friday 5th May

The Trade War Escalates, What You Should Do About It

UK Interest Rates: A delicate balance for the BoE

Forex Analytics: Reversal in The Euro

IQ Option·07.06.2018
Close
We use cookies to understand how you use our site and to improve your experience. By clicking "Got it" or by continuing to use our website you agree to their use.
Cookie settingsGot it
Manage consent