Dropbox: What to Expect from Its Q2 Earnings Report

Dropbox is set to release its latest quarterly earnings report this Thursday after the closing bell. Given that this will be the second report Dropbox releases since the company underwent a successful initial public offering (IPO) in March, analysts are keeping a close watch on the cloud storage giant’s performance. More on Dropbox’s stock fluctuations as well as what to expect from its Q2 earnings report below.

Though shares of Dropbox have gained 9.5% since going public, the company has experienced significant volatility throughout the past few months. After appreciating 47% in mid-June and reaching a price of $42 per per share, prices plunged 17.4% by the end of July. However, shares have managed to regain approximately the same amount this past week alone, suggesting Dropbox has potential for more bull runs in the months ahead. 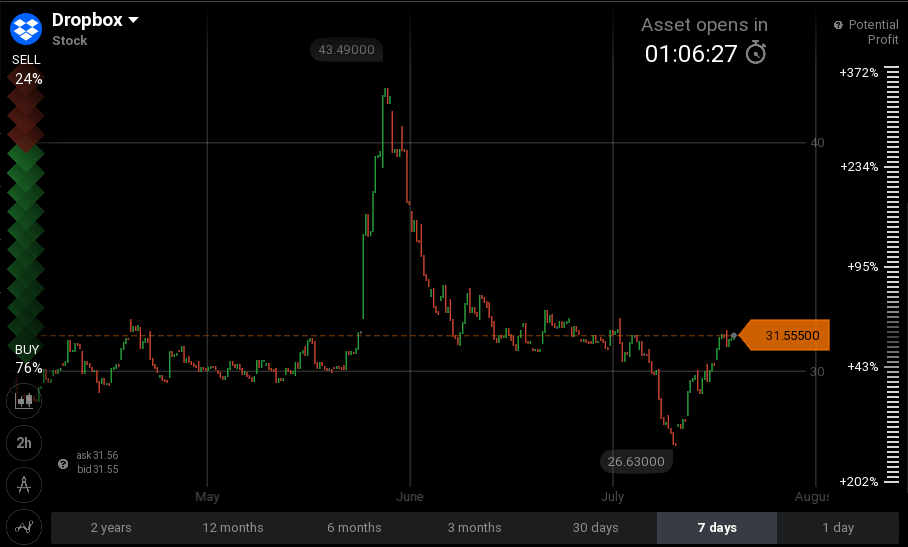 On the whole, analysts are offering a bullish outlook on Dropbox’s future. Global investment banking firm Jeffries recently upgraded DBX from a status of Hold to Buy, considering the company to be undervalued.

Though some investors may be concerned with competition, others suggest Dropbox’s close relationship with consumers will allow the company to stay ahead of the game. Moreover, its investment in Shingled Magnetic Recording (SMR) technology may pay off in the form of positioning Dropbox as a top contender against Apple and Google.

As for earnings, investment research firm Zacks expects Dropbox to report earnings of $0.06 per share. Its EPS estimate stands at $0.28, four cents higher than previously projected. Lastly, Q2 revenue is estimated at $330.3 million.

Dropbox has seen mixed performance over the past quarter, but analysts have reason to believe the company could potentially pull off an earnings beat for Q2. Overall, solid growth and investment in new products make Dropbox a firm worth keeping tabs on in the long term.

Economic Factors for Stocks: What Should You Be Paying Attention To?

Tatyana Scherbakova·16.02.2021
Close
We use cookies to understand how you use our site and to improve your experience. By clicking "Got it" or by continuing to use our website you agree to their use.
Cookie settingsGot it
Manage consent