It goes without saying that at this stage cryptocurrencies are going to be the way forward for finance the world over. The advantages are too big to ignore, the development communities are huge and hard at work, and major financial institutions and other significant organizations are investing in a big way.

At the very least we are going to see their integration at some stage in the near future. Adoption is coming to UK markets in bits and piece, with more and more vendors accepting bitcoin and other related cryptocurrencies day by day. It is growing and will soon be mainstream, if it is not already mainstream. The only real question is what cryptocurrencies are going to take command, and in which industries.

Litecoin and Bitcoin ATM’s in UK

There has been a recent surge in demand for cryptocurrencies. An example of such demand and growth is the installation of Litecoin ATM’s across the UK.

Litecoin is the current global leader in terms of of Litecoin supportive ATM’s, with 91 Litecoin ATM’s installed in June 2017 alone. Many Bitcoin ATM’s cater for Litecoin withdrawals and vice versa. The main owners of these ATM’s are Bitcoin of America, RockitCoin, Athena Bitcoin and Bitstop. In May, Alphavend announced that it was going to install a Bitcoin ATM with Litecoin integration on Brighton. 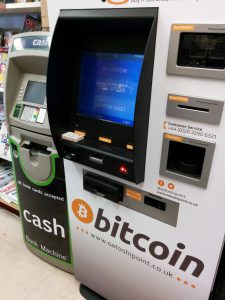 Litecoin is a coin very similar to Bitcoin except that it is much faster and easier to use. Hence the name Litecoin, and it solves much of the technical drawbacks of Bitcoin. It could well be possible that people will store their money in Bitcoin but use Litecoin for everyday purchases, the two being the most well-known cryptocurrencies and sharing many features. Bitcoin can be likened to the equivalent of a “savings account” while Litecoin would be the “current account”.

The correlation of Litecoin to Bitcoin has historically been around 0.8, meaning there is a quite a large correlation. While this may seem like the two are intrinsically linked this may not be the case. If there is a Bitcoin coin crash, instead of Litecoin sinking with the ship, investors may actually flock to the perceived next best thing – Litecoin. That said they are so intertwined it is more likely that each will bring up the other, given the level of interoperability for the two currencies. While other currencies like Ethereum are said to be “against” Bitcoin, they may well be up against the Bitcoin/Litecoin duo.

But before the UK expands in the cryptocurrency sector the regulatory infrastructure needs to be put in place. Before vendors and investors start trading and investing in alternative currencies there is the very large question of taxation and associated legal requirements. Other countries such as Japan are a little ahead of the curve in terms of the legal status and regulation of cryptocurrencies.

With the collapse of Tokyo based cryptocurrency exchange Mount Gox and the subsequent loss of $450 Million, Japan has now instigated legislation and procedures to ensure that the disaster does not happen again. Japan is also actively engaged on a number of cryptocurrency projects with different vendors, and could serve as the catalyst for regulation in the UK and the rest of the world.

There is very little regulatory oversight of Bitcoin in the UK, and it is currently treated as private money. Bitcoin has a 72% share as the most actively traded cryptocurrency, and Bitcoin users in the UK are on the rise. In order to regulate a cryptocurrency such as Bitcoin it is first necessary to categorize it as either a community or a currency or as something other than those two. This will determine how the commodity/currency/unknown is going to be taxed and regulated.

Cryptocurrencies seem to lie halfway between a currency and a commodity. It can be spent to purchase a burger yet can also be traded on an exchange as a finite commodity. In the US, Bitcoin has met with some resistance from the Securities and Exchange Commission. The SEC recently shot down two proposals to create an exchange traded Bitcoin platform.

It is possible than we will see cryptocurrencies in the UK but not the ones we are familiar with – Bitcoin, Litecoin, Ethereum and Ripple. Many large institutions are talking about starting their own cryptocurrencies in line with regulatory policies which would be monitored more carefully. The issue with Bitcoin and associated companies is that they view regulation as being “anti” Bitcoin, as Bitcoin is supposed to be completely decentralized without outside interference. From this perspective Bitcoin may need to grow up and accept regulation, otherwise it will be overtaken by currencies that are willing to be regulated. According to Bob Swarup, principal of Camdor Global Advisors:

“If Bitcoin was going to become any kind of valid currency with widespread appeal, then it really needed to grow up and growing up in the currency world means accepting the influence of the state and regulation in some way”

As history suggests, the minute a currency or a commodity is given legitimacy by an official source, then demand will skyrocket. But the fact that it is not yet regulated means that many businesses are wary of accepting it or spending it.

That said, some companies are going ahead with cryptocurrencies while the UK regulatory authorities seem to be in limbo. UK based fintech company Revolut is a company which allows users to trade currency pairs with no transactions costs and supports numerous currencies. Revolut has a current userbase of 700,000 customers, 400,000 of whom are in the UK, and is adding bitcoin to its list of acceptable currencies. According to Revolut customers will be able to leverage Revolut in the same way that other currencies are currently used on the platform, to pay for goods and services directly or to exchange bitcoins for other listed currencies.

Investment in and adoption of cryptocurrencies, in particular Bitcoin and Litecoin, are on a rapid climb in the UK. This trend is going to continue and people are flocking to cryptocurrencies. The onus is on regulatory authorities to establish solid guidelines and procedures sooner rather than later, as it will be easier for businesses and will bolster UK revenue. The current state of affairs seems to be to wait and see how Japan fares in its regulation of the cryptocurrency market, and take its cue from them. In terms of regulatory frameworks and acceptance of Bitcoin, the UK, the USA, and other nations seem to be far behind Japan and unwilling to issue clear and definitive guidelines so that businesses can move forward.

Dan Morehead: It Is Hard to Calculate the Cost of Mining